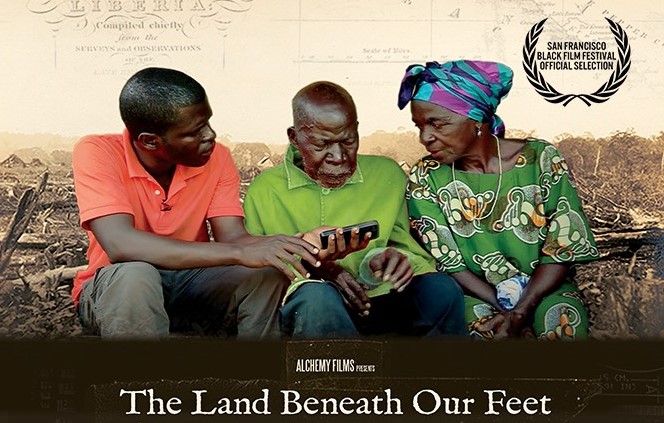 Through a fortuitous set of circumstances, I recently (re)discovered the existence of the hour-long documentary The Land Beneath Our Feet, which can be freely streamed on Amazon Prime (it has also screened in several locations in Liberia).

Like so many matters pertaining to Liberia, the genesis of the film lies in the United States, in this case Wisconsin. The film emanated from an encounter at the University of Wisconsin of a Liberian graduate student, Emmanuel Urey, and a professor of environmental history there, Gregg Mitman.

Their collaboration appears to have made something of a small splash in American academic circles. In 2017, the movie was the subject of a detailed H-NET roundtable review. It is also prominently featured in a 2020 issue of Africa Today, a leading African Studies journal published by Indiana University.  However, the film itself appears designed to target a non-specialist audience.

The film vaguely made a blip on my radar when it was released. I mistakenly thought it focused solely on a 1926 ‘expedition’ to Liberia, undertaken by Harvard University, apparently to support/assist Firestone’s establishment in Liberia that year.

A companion website to the film, ‘A Liberian Journey’ contains a number of clips of video footage shot during this journey, one of which shows an expedition member resembling a colonial caricature, walking down an unpaved street of Monrovia with a pipe and Melania Trump style pith helmet.

However, while some video footage of the expedition is incorporated into the documentary and it opens by devoting significant attention to historical context, the main focus, is, as the title suggests, land, and contemporary land struggles more specifically.

While the film is well worth watching, Mitman’s academic precision (he is credited as director, producer, and writer) could use a bit more focus.

The Land Beneath Our Feet follows several diverging threads.  While interesting, they make for a somewhat jumbled narrative.

After featuring heavily in the initial stages of the film, Urey largely fades away. Several appointed government officials emerge and the activities of an NGO, the Sustainable Development Institute, come to the fore. The Ebola public health crisis also receives attention.

Both the Government of Liberia and multi-national agro-companies operating in Liberia come in for criticism, the latter more explicitly so.

It is fascinating to track Mitman’s balancing act as it seems evident that despite his issues with Liberian governance, he is eager to remain persona grata with the national government.  The chair of the Lands Commission and the director of the Center for National Documents and Records Agency are both allotted significant screen time. They are portrayed, for the most part, sympathetically, although the inclusion of comments like Urey’s “even though I have the deed, I don’t feel very secure” points to the serious shortcomings of the bodies they oversee.

Footage of Mary Broh’s 2015 demolition campaign, which incredibly did not make international headlines, appears. However, former president Ellen Johnson Sirleaf is scarcely mentioned and the critique of her administration is largely indirect. It would be interesting to know if Mitman would have treated the George Weah administration more harshly.

Several of the largest international agro-corporations operating in Liberia at the time of the film’s production – Firestone, Sime Darby, and Golden Veroleum – are treated less sympathetically, although there is an interesting interview with an expatriate Golden Veroleum representative who defends his employer.

On the whole, Mitman has composed a fascinating film that touches on a variety of issues and illuminates an array of voices. There is ample room to dig deeper and I hope this film will provide him with a more prominent platform to do so with his subsequent work.

Sharing
Tags The Land Beneath Our Feet
Contributions to The Bush Chicken are not tax deductible.