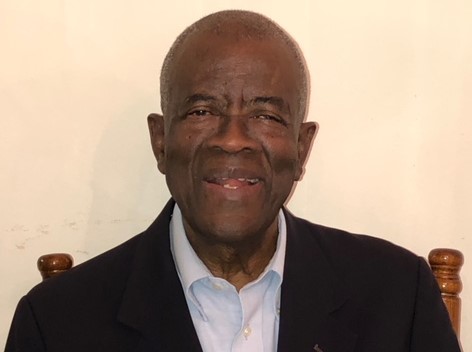 The prominent Liberian scholar, D. Elwood Dunn, has a new book out this month.  Dr. Dunn’s new History of the Episcopal Church of Liberia Since 1980: A Sequel comes nearly two decades after the release of his first history of the church, covering 1821-1980.  It is also his second book since his retirement in 2012 from Sewanee: The University of the South, where he had taught since 1981. The first post-retirement publication was an African Homestead Legacy Publishers Occasional Paper, Liberia and Independent Africa, 1940s to 2012, A Brief Political Profile.

Dr. Dunn has remained quite active since his ostensible retirement.  He was the 2012 Independence Day National Orator, reprising a role he played in 1979 as a rising member of President William R. Tolbert’s administration. He has also supported efforts to develop a Liberian think tank, the Center for Research and Policy Studies. Regular readers of The Bush Chicken will be familiar with the numerous obituaries he has authored, testimonies that will surely be considered a valuable public service by future researchers.

In 2014, he was tapped by President Ellen Johnson Sirleaf to serve as the coordinator of the National Symbols Review Project, an effort to build a more inclusive Liberian society via a reconfiguration of the state’s official symbols. He also served on President Sirleaf’s Constitution Review Committee and remains engaged with his beloved Liberian Studies Association, whose journal he edited from 1985-1995.

While Dr. Dunn’s studies of the Episcopal Church in Liberia do not invoke his personal context, they surely benefit from his lengthy association with the church.

As a young student from Grand Bassa at the University of Liberia in the early 1960s, the future Dr. Dunn’s orientation to Monrovia was significantly shaped by a trinity of ecumenical experiences: attending services at Trinity Cathedral, participating in activities at the YMCA, and membership within the National Student Christian Council. He deepened his connection to the church when he transferred to Cuttington University, an Episcopal institution, for the final two years of his undergraduate education.

In 1962, Dunn’s first travel outside of Liberia, to Nairobi, Kenya arose from his activities with the All-Africa Christian Youth Assembly. He later reminisced that this travel was “an eye and mind opener” which instilled his “first sense of awareness of the place of Africa in the scale of human civilization.”  His wife, Matilda E. Greene Dunn, is an ordained Episcopal priest who attended St. John’s Episcopal High School in Robertsport.

On the occasion of the publication of his second history of the Episcopal Church in Liberia, this wide-ranging conversation further explores the context behind the book’s publication.  The discussion by correspondence between Brooks Marmon (BM) and Dr. Dunn (DED) has been edited for length and clarity.

BM: What has been your personal engagement with the Episcopal Church of Liberia over the years?

DED: Missionary Bishop B.W. Harris at St. John’s Episcopal Church, Lower Buchanan, Grand Bassa County, Liberia, confirmed me in 1954. This was the genesis of my significant engagement with the Episcopal Church.

In Monrovia during my college years at the University of Liberia (1960-62), I became active at Trinity Cathedral under the deanship of the Rev. Seth C. Edwards, and the Rev. Canon Burgess Carr. I completed my college education at Cuttington University in Suakoko (1964), at one time toying with the idea of studying for the priesthood.

BM: Why did you decide to write a sequel to the 1992 history?

DED: Having done the first volume of the church’s history from 1821 through 1980, given my close relationship with Bishop George Browne, especially after the 1979 civil disobedience in Monrovia and the 1980 coup d’état, coupled with my even closer engagement with him and his family during the time of his illness from 1991 to his death in 1993, I felt within me a passion to tell the church’s story through the work and lives of its bishops.

The difficult interim (1993-1996) between Browne’s passing and the installation of his successor, Bishop Edward Neufville (Neufville and I were students together at Cuttington in the mid-1960s) and my knowledge of some of the unfolding events compelled me to attempt to bring together a story of the church for posterity. At least my version of the story. 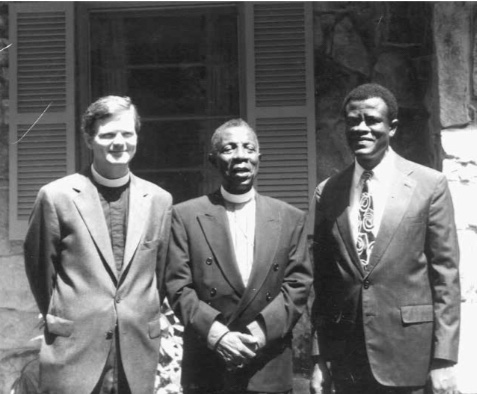 From left to right (Sam Lloyd – chaplain of the University of the South, George Browne – Archbishop of West Africa, and Elwood Dunn). Photo courtesy of D. Elwood Dunn

BM: How did you tell this story?  What were your sources and methods?  Were there any key differences from the first volume?

DED: Studying the church through the lenses of its leaders/bishops and doing so in the context of the society within which it is embedded, but also taking full account of the external contexts, has been my methodology for both volumes of the church’s history.

My primary sources are the papers of the bishops. For Browne, these are lodged at the archives of the Episcopal Church of the United States in Austin, Texas. For Neufville, his papers were generously shared with me by his widow, Mrs. Louise Morias Neufville, and his son, Edward W. Neufville, III. Bishop Jonathan Hart, the incumbent bishop, granted me a number of extensive interviews over the years between 2016 and 2018. The book’s bibliography tells the full story of sources, primary and secondary.

BM: You ended the first volume in 1980 and pick up with 1980 in this sequel.  Were the events of 1980 a significant milestone in the history of the Church, or is this periodization more reflective of a monumental moment in Liberia’s history?

Bringing the church home to Liberia was already a major thrust of Browne’s ministry. In 1982, Liberia severed ties with the American church and became a member of the Anglican Province of West Africa. The change has not been neat. It remains a work in progress.

BM: Speaking of challenges, what efforts did the Church make to resolve the war?  Do you identify any particular strengths or weaknesses in any such efforts?

DED: The Episcopal Church was more visible and active on the national scene in the 1980s and as the conflict loomed than it was when the war actually broke out. The ill health of Bishop Browne beginning around 1990, culminating in his death three years later, as well as a serious division in the church that ensued prevented the church from attaining a desirable level of engagement with mediating the national crisis.

BM: I understand you recently donated your Papers to Cuttington University.  What has it been like working without them?

DED: I donated all of my books, but not all of my papers.  I am aiming to digitize the papers, possibly having them organized on a website and accessible to researchers. [In the interim, eager researchers can find the full run of the Liberian Studies Journal during Dr. Dunn’s editorship online.]

BM: How did Cuttington shape your development in a way that a more secular institution may not have?

DED: My college education was equally divided between the University of Liberia and Cuttington College, where I spent my junior and senior years.  At UL, I was associated with Trinity Cathedral, the National Student Christian Council, and the YMCA. Those were character-molding institutions/moments for me.

I was seriously considering training to be an Episcopal priest. I was focused on acquiring a strong liberal arts education and found at Cuttington professors that were motivating and encouraging. I encountered Liberians from rural Liberia and fellow Africans from a wide range of then-European colonial territories on the verge of independence. I felt at Cuttington the “African revolution of rising expectations” of the 1960s and felt I was also a part of the movement. I valued the liberal arts education in the Christian setting. I grew so much at Cuttington. The two-year experience there shaped my life significantly.

BM:  What’s next? Are you looking forward to a quiet retirement or do you have another project on deck?

DED: As long as my health allows, and other life circumstances remain constant, I would like to write my life’s story. I have already assembled my papers for this task.

The interviewer, Brooks Marmon, is a Ph.D. student in the Centre of African Studies at the University of Edinburgh. His great-great Aunt was an Episcopal missionary at the St. John’s Mission in Robertsport, Grand Cape Mount in the early 20th century.