“If you have a passion for something, do not allow anything to divert you from it.”

These are the words of the 26-year-old CEO of Mako’s Fruits, Mariam Mako Meiplay, whose humble story began in Tamayta, Bong, a village located approximately 45 minutes away from Gbarnga.

Born into an underprivileged family that survived on subsistence farming, Mariam could not start school until the age of 10. However, despite her rough beginnings, Mariam now successfully runs her own juice and smoothie bar, an outfit that began operating only three weeks ago. She told her story on the inaugural edition of a weekly Facebook Live series called “Made in Liberia” sponsored by consumer goods company J-Palm.

Mariam recounted her early classroom experiences – sitting among her much younger classmates, who were mostly between ages three and five. From feeling out of place to the name-calling, she soon felt discouraged, dispirited, and disheartened at a young age.

“It was difficult. My classmates would always point out that I was an older student. They would laugh at me, and sometimes I would cry because it wasn’t easy to accept that,” she said.

At that time, the future entrepreneur could not envision any other life beyond the subsistence farming her parents were practicing. However, luckily enough, her principal was determined to see his new student succeed. Because Mariam barely spoke English at the time, his knowledge of her native Kpelle language was a medium to pass on much-needed words of encouragement – he was always telling her that anything was possible. That advice and reassurance helped Mariam to block out all the noise and hurtful comments, and carry through to achieve her education.

She was eventually enrolled in an accelerated learning program in the school, and in 2014, she would demonstrate herself to be a success story of the program, catching up with her classmates and graduating from high school at the age of 19.

However, the Ebola epidemic and a lack of finances delayed her pursuit of higher education; but today, Mariam is currently an Agricultural Science student at Stella Maris Polytechnic – a piece of the puzzle that fits perfectly into the bigger picture of a dream she, at the age of 10, set out to achieve.

Ever the dreamer, when she just started at Stella Maris, a brilliant idea hit Mariam. Her parents had provided her with access to 75 acres of land in Bong that she decided to use to start a banana and plantain farm. A few of her friends expressed interest in her idea and they contributed funds to the project.

But the aspiring agriculturalist had made a miscalculation, as she had not studied the soil conditions to understand that it was not fit for growing those crops at the time. All the investments into the farm went down the drain and all was lost.

“It was very difficult for me and my friends who had invested with me,” Mariam narrated. “I was feeling bad, and downhearted. But then, I decided pick myself up again. I had a passion and a dream, and I was not going to allow anything to divert me from it.”

Unable to profit from her farm, she pivoted to another business idea, which moved her higher up the value chain. This time, she resorted to packing fruits in bowls and selling to offices around Monrovia. Recognizing the importance of social media, she even created a Facebook page via which interested buyers would reach her and make their orders. She also eventually made a distribution deal with a pastry shop, who resold her fruit bowls to its customers. Although she started small, Mariam was determined to build her business little by little into something bigger.

However, without much business knowledge, she hadn’t dedicated enough effort into tallying the costs of all the inputs that went into her fruit bowl business, and she eventually realized that she was barely breaking even with her operations. As expected, the business eventually fizzled.

As one door shut, another opened for the ever-resilient Mariam. Pinkberry Liberia, a frozen yogurt restaurant was coming into Liberia and she secured a job working as a frontline staff with the American franchise – an experience she described as her first in dealing with customers directly. Here, she learned top-level customer service, basic accounting and inventory management skills, and knowledge of how to make different types of smoothies.

With the knowledge she was acquiring at Pinkberry, Mariam decided to get back on the path that led to her passion and dream. She started putting together her idea for Mako’s Fruits, where she would sell juices, smoothies, fruit cups, and pastries.

“I decided to start this business because it goes with my future dream and my career plan in the agricultural aspect,” she explained.

Part of her motivation involved making healthier food and drink choices more accessible to the average person in Liberia.

“What I sell is what we grow and produce here in Liberia. I also wanted to provide a healthier option for those who have been advised to stay off sugars, and also those who are able to pass by, because our prices are very reasonable and affordable,” she explained.

She was able to maintain the low prices of her products due to the low costs of production the business tends to take on.

“I am a farmer too, so I know where to go and which farmers to buy the fruits from so as to maintain the affordable prices for the goods we sell,” said Mariam.

To further cut costs, she would operate from a small, but beautifully decorated container on land she rented along Tubman Boulevard.

But getting the funds to start was not easy – Mariam recounted how she used her savings from work she had done for a photography company, and money she saved as an employee at Pinkberry. This earned her more money to purchase equipment needed to operate her business from China.

“Even when I saved, what I had wasn’t enough to start exactly what I had in mind. But even so, people encouraged me to start with the little and slowly build up,” she recollected.

Eventually, one of the directors of Pinkberry Liberia, Jefferson Krua, provided the remainder funding needed to realize her goals [Full disclosure: Jefferson Krua is also a co-owner of The Bush Chicken].

Even with the funding now secured, Mariam said there were many frustrations along the way: “It took so long, especially for part of acquiring and designing our workspace. I was almost frustrated because we were supposed to open on an earlier date, but we weren’t able to. Nevertheless, we were eventually done. You know, it won’t always be easy, but you just have to keep in mind that if you want to do something, with God’s help, it is possible.”

At the launch of her business on August 1, Mariam managed to pull a big audience to show up and support her. This she did through her friends, a Facebook advertisement, and a sleek flyer that they managed to circulate to spread awareness of the new beginning. 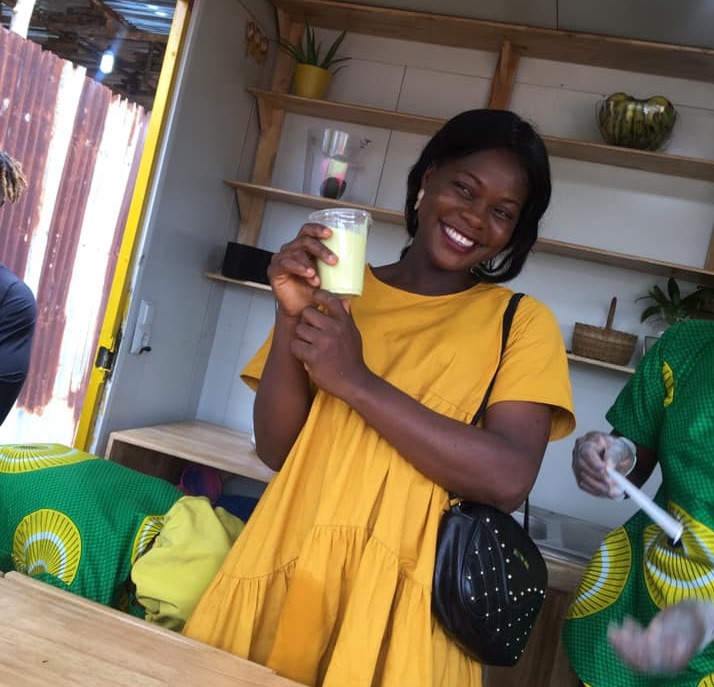 Mariam Meiplay holds a cup of Mako’s Fruits’ avocado ginger smoothie, which retails for US$2.50.

Although she has come a long way from the 10-year-old girl in kindergarten – owning and running her own business and hiring four persons – Mariam still wants to go further. In the next two to five years, she articulated wanting to grow and expand beyond one location.

“We want to eventually be able to provide jobs for people like we already did when we started with about four employees at Mako’s Fruits. This, I think, was a really impressive move on my part,” Mariam said gleefully.

She expressed her hope in wanting to see more people in Liberia follow in her trade because according to her, Liberia needs more healthy foods.

Mariam did not hesitate to put in a word of encouragement to those seeming to have a rough start, and those contemplating throwing in the towel at the start of their journeys.

“I would just like to tell anybody who wants to start up their own business or career, that you can do anything through Christ. If you dream it, you can do it. It will always be difficult at the start, but you shouldn’t give up. Strive to be consistent,” she encouraged.

Mariam also stressed the importance of good, beneficial, and valuable company. She attributed her current success to the support of her friends and family, from those who invested with her, to those who believed in her potential.

“If you have a passion for something, do not allow anything to divert you from it,” she concluded.

Mako’s Fruits is located in a bright yellow container on Tubman Boulevard in Congo Town, opposite Kia Motors, and not far from Musu’s Spot. The intersection is commonly referred to as Joe Tate Junction. The juice and smoothie bar can also be found on Facebook and Instagram or at +231 770 646-648.