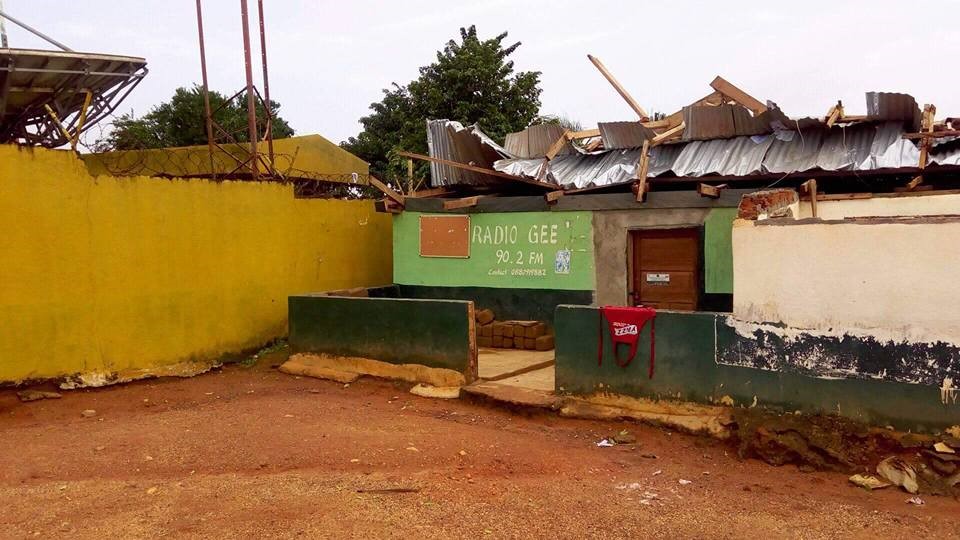 Besides the structure of the building, some of the equipment destroyed include three desktop computers, a studio mixer, and the audio system.

The storm struck on Friday of last week. Speaking in an interview with The Bush Chicken on Tuesday in Fish Town, the station manager, George Kayee, said a quick fix is needed to help remedy the situation or the station could risk losing even more equipment.

He said rainfall was persistent and the station lacks trained technicians to disconnect other equipment for safety.

â€œThe county is in total darkness since last week Friday as a result of the violent storm that damaged our facility and several houses in this city,â€ he said. â€œIf people will not come to the aid of this only station that is serving them, we might lose all our materials because we donâ€™t have anywhere to keep them now.â€

Kayee said the best short-term solution is to purchase roofing sheets, planks, cement, and other building materials to reconstruct the broken walls and the damaged roof.

The station manager added that the station had already written for support from the River Gee Legislative Caucus, the countyâ€™s leadership, and other prominent people from the county, including Dr. Dougbeh Chris Nyan and Dr. T. Nelson Quenneh.

He said he had also sought intervention from the Press Union of Liberia, the Association of Liberian Community Radio, and the USAID-funded Internews.

Kayee said the situation was urgent, as the station had the longest broadcasting schedule in the county â€“ it was on air for 19 hours each day. He said the state-owned ELBC Radio and UNMIL Radio (now ECOWAS Radio) are both unavailable in the area.

Kayee placed the cost of the roofing at approximately US$800. He added that once the roof is repaired, the station will need to hire a technician to help repair its equipment.

The storm also took damaged several homes in Fish Town, leaving several people homeless. They sought refuge in the homes of friends, family members, and public places such as churches and schools.