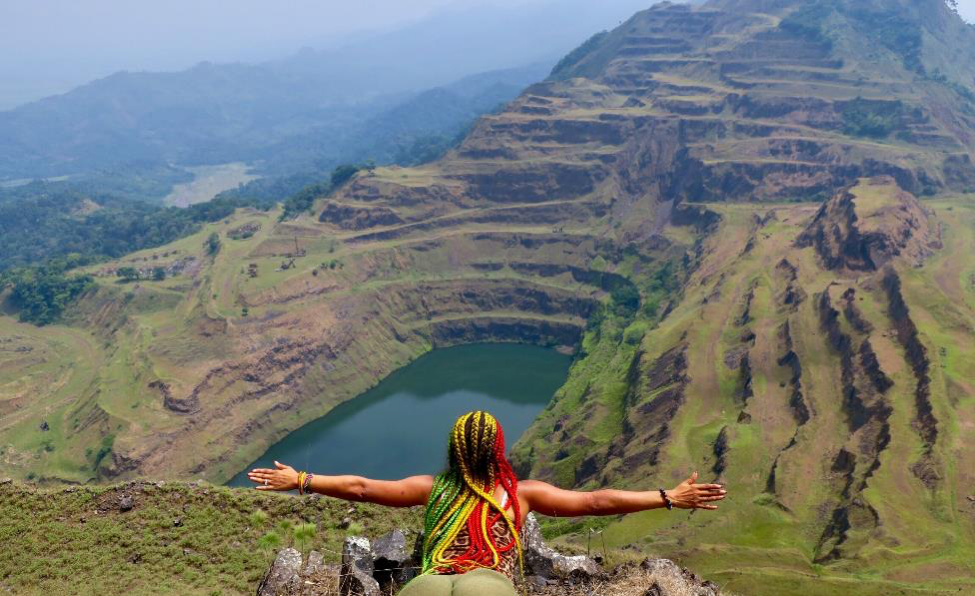 Most people who engage in touristy activities when in Liberia are often coming for some other purpose. They may be Liberians who live abroad and are visiting families, or maybe theyâ€™re immigrant workers within the lucrative aid industry. Sometimes, theyâ€™re missionaries.

Rarely do you meet someone visiting Liberia purely for tourism. Meet Danay Bustamante, who describes herself as a passionate traveler, dancer, and dreamer. When she visited Liberia in March of this year, it was the 89th country she had been to as she was making her way across West Africa by public transportation. A Cuban who lives in Germany, she had come from Nigeria and was going through Sierra Leone next.

Bored working in the accounting field, Danay decided to quit her job to do the things she loved the most â€“ traveling the world, meeting new friends and dancing salsa. We sat down to interview Danay about her experience being a tourist in Africaâ€™s oldest republic and visiting places like Nimbaâ€™s Blue Lake.

The following has been edited for clarity.

When did you start your West Africa road trip?

I started this trip four months ago and my idea was to do it within six months but it depends on the country and how much I like it there. I went to Nigeria and ended up staying for three weeks. I didnâ€™t know I was going to stay that long but when I was there, there was a carnival happening â€“ the biggest African street festival. I saw a group rehearsing and liked it so I wanted to join them. Danay and her fellow dancers at the carnival in Nigeria.

I was trying to learn the choreography and once they realized that I was a dancer, they asked me to help them with the choreography. So, in the end, I danced with them for two days in the carnival. They even dressed me like an African Queen. Danay dressed as the ‘African queen.’

Generally, if the country is more exciting, then maybe I stay like a week to ten days; it depends on how many places I want to see and the people I meet there. Also, if I can teach or organize a salsa dance class, that makes me want to stay even longer.

I see you have your hair colored in the pan-African colors. How did you end up with that?

I visited Ghana and was hoping to stay for about two weeks there but I met a lot of people and it was going very well so I decided to stay longer and they were celebrating on March 6 â€“ it was Ghanaâ€™s 60th independence celebration and it was my birthday too, so I decided to stay until this day and I decided to make my hair the colors of their flag. I went into the salon and the stylist asked which colors of which flag and I said, â€œWhatever, almost all West African flags have the same colors.â€ So, I had the Ghanaian flag in my hair. Danay celebrates her birthday and Ghana’s with colored braids.

When I travel, I like to integrate into the culture and try new things. Every time I come to Africa â€“ and this is the third time â€“ I get my hair braided and dress in African attire. But this is the first time Iâ€™ve done the colors.

Have you interacted with many Liberians since arriving?

Itâ€™s funny because most of the people Iâ€™ve met here are expats; I donâ€™t know why.Â  I went to visit Monkey Island and the guy I went with was a Nigerian. Heâ€™s been living in Liberia for many years, but heâ€™s from Nigeria. Chimps roam on one of the islands collectively known as Monkey Island.

I was looking for Liberian dresses to try on â€“ something traditional, but I havenâ€™t found any. Liberia is the first country Iâ€™ve visited in West Africa where people donâ€™t know much about places to visit. I understand that some people donâ€™t have the time or the money to travel, but in other countries, people at least know of the places. They say, â€œI havenâ€™t been there, but I know you can go to this place.â€ But here in Liberia, Iâ€™ve asked taxi drivers, etc, and a lot of people just donâ€™t know. Danay relaxes on a canoe near Marshall

I was very happy I discovered places I didnâ€™t know existed because I couldnâ€™t find any information online. For example, I entered the country from the north â€“ I came from the Ivorian border through Nimba. It was my first stop when I entered Liberia. I knew about Mt. Nimba and the people there told me I could climb to the top and see the three countries and thatâ€™s what I did.

I climbed, and there was an old man who lives at the top that told me about a blue lake, I didnâ€™t know about this blue lake because there is another Blue Lake in Bomi, which I visited yesterday. The blue lake in Nimba was the most beautiful view Iâ€™ve seen in this country, Iâ€™m really in love with the pictures I took there. I didnâ€™t expect to find this and it was very beautiful. Sometimes when you see pictures you know what youâ€™re expecting when you visit these places and I went there and didnâ€™t know this lake was there and was very impressive and I think thatâ€™s the part I liked most since Iâ€™ve been here. Then I went to Kpatawee Waterfall. I didnâ€™t know they had two waterfalls. The second one is forbidden because itâ€™s a little bit dangerous, but I met some people from an NGO who unofficially took me there.

Then I came to Monrovia, I visited the other Blue Lake yesterday, very beautiful, then I visited the monkey island today, and Iâ€™ve been visiting other places in the city like towns as well

How did you find our roads compared to what you saw in the other parts of West Africa youâ€™ve been to so far?

To be honest, the roads in Liberia, I think, are the best ones I have seen. I came from Gbarnga to Monrovia, but they told me they built this road a few months earlier so it was very good, but the roads in other countries, I always call it an African massage. One of the waterfalls Danay visited in Liberia.

How is it traveling alone as a woman? Are you particularly concerned about your safety?

To be honest, I donâ€™t feel any danger. Everybody is telling me Iâ€™m crazy and maybe thatâ€™s why everything is working out fine. If youâ€™re traveling and youâ€™re afraid of everything you do, then maybe negative things will happen to you, I donâ€™t know.

Everywhere I go, Iâ€™m self-confident. I know what I want and I ask for it. When I was crossing the border, I asked the motorbike rider for the price and he told me 10,000 CFA. I said to him, â€œNo, are you crazy? I donâ€™t pay this money. I pay 3,000 CFA.â€ So, Iâ€™m very confident, even if I donâ€™t know this price and then I tell him my friend just called me and told me that the price is 3,000 CFA and thatâ€™s the price Iâ€™m gonna pay, even though nobody called me to tell me that. I donâ€™t feel like people are taking advantage of me because Iâ€™m a woman; I actually feel the opposite is happening; I have the feeling that people are helping me because they see Iâ€™m a woman traveling alone, so everywhere I go, people are acting like theyâ€™re my brothers and sisters. They go with me to the driver and they talk the price down on my behalf like they know me from the home.

Do you have any advice for someone who may be looking to take a similar trip?

Follow your dreams. If you really want to do that, just go ahead, of course, you have to take care, there are things you cannot do. For example, when I went to Benin I was staying in a place near the beach, everyone told me not to walk alone on the beach at night, so of course, Iâ€™m not gonna do this. I could get robbed there or whatever can happen to me, so you always have to take care where you go and what time you go. But I donâ€™t think West Africa is a dangerous place as everybody makes it to be. I mean, everywhere in the world could be dangerous; you always have to take care of this but in general, there are very beautiful places to visit in West Africa and Iâ€™m very proud that I came here and Iâ€™m very happy Iâ€™m seeing all these places and I would say that everybody can do that you just really need to have the will to do it and there is always a way.

To follow Danay on her travel adventures, check out her InstagramÂ or visit her blog. All photos courtesy of Danay Bustamante. Jefferson Krua contributed to this piece.