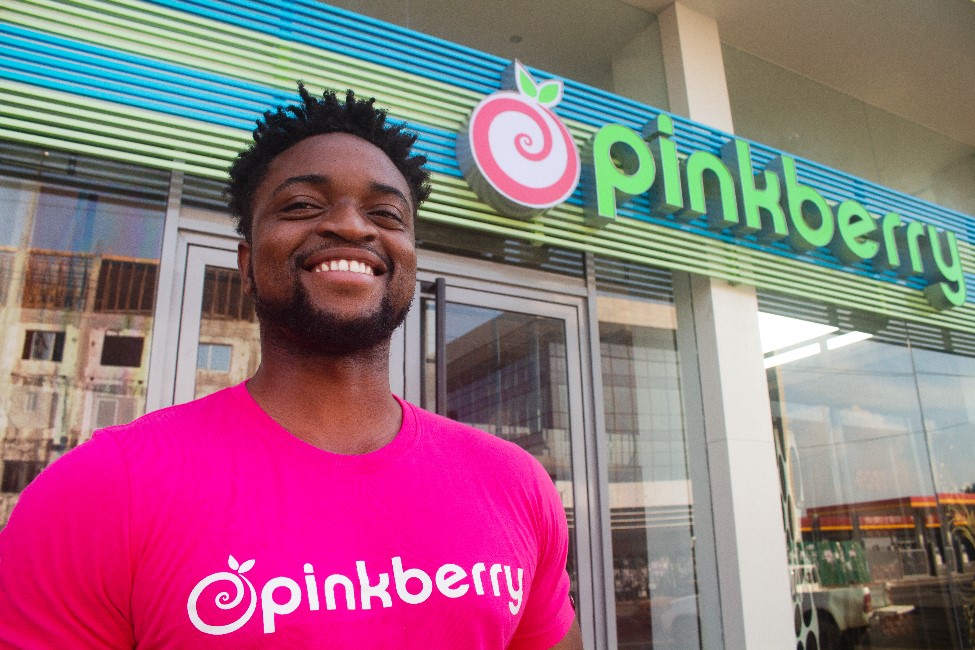 It’s true ladies and gentlemen! Have you not heard? Have you not seen it? Pinkberry is here, and nothing will ever be the same again. Could it be that we now have that delightful cup of non-fat, silky-smooth, yogurt goodness? The answer is, Heck Yes!

We caught up with the founder of The Bush Chicken, Jefferson Krua, who is responsible for bringing this slice of heaven to Liberia. He was a bit reluctant at first, but we can be very persuasive. Thankful for you, our dear readers, we were able to get a scoop, pun intended.

Our first question was ‘what took you so darn long, Jefferson!’ Just kidding. What we wanted to know was how the idea of bringing Pinkberry to Liberia was conceived.

Candidly, Krua responded, I’ve been aware of Pinkberry since I used to live in the Washington, D.C. suburb of Arlington. But I didn’t have a close enough knowledge of the franchise until a close college friend of mine, Kobbina Awuah, orchestrated the move to bring Pinkberry into Ghana. At that time, it was the first Pinkberry franchise in sub-Saharan Africa – “it was a big deal.”

The Love of Liberty

In a slight moment of revelation, Jefferson disclosed his deep-seated desire to see Liberia succeed. According to the media guru, Liberia has been ignored, and that should change.

“I was a bit jealous of Ghana for being able to benefit from such a world-class franchise, and since then, Koby – as I call him – and I began talking about what it could take to bring Pinkberry to Liberia,” Krua said.

However, he understood that patriotic feelings and idealism were not enough to persuade Pinkberry to open up shop in his dearly beloved country. So he put in the work.

“This conversation lasted for about two years. During this time, I conducted market research on the sector to examine the major players out there, their price points, and the number of customers they were attracting,” he said. “All this information would allow us to gauge whether it made sense to bring Pinkberry to Liberia. In the end, we saw that the market was ready for Pinkberry, and that’s how this partnership came about.”

Krua shared that Liberia has been ignored by many companies who will instantly jump to, “Ghana, Nigeria, or South Africa simply because of the population those countries support.” However, he advised that the lack of competition makes Liberia, “ripe for investing.”

Curious, we asked Krua why he feels confident in the brand’s success in Liberia considering that it would be the first American brand in the Land of Liberty.

“I think Pinkberry will do well in Liberia because, honestly, there’s nothing else like it on the market. Not only are we bringing a product that’s non-existent in this form – frozen yoghurt, but everything is made fresh daily, with nonfat milk and nonfat yoghurt. Not only that, but the toppings are to die for,” he said.

“We have fresh, seasonal fruits that are cut daily – we won’t ever serve frozen or canned fruits. In addition to the fruits, we also have tons of gourmet toppings, from nuts to granola, and other features that you don’t find in Liberia. Besides the product we sell, I think people will be impressed by the ambience. The store is a well-designed work of art, too. When you’re in the store, you won’t be able to tell whether you’re at a Pinkberry in Los Angeles, where the first store was launched, or Monrovia. We’re also making a special effort to ensure top quality customer service. I think Liberians have been yearning for all these features in a restaurant. We shouldn’t have to leave our country to experience these otherwise mundane pleasures of life, and I’m hoping that’s what Pinkberry can bring to Liberia. I think Liberians will embrace it.”

We asked Krua how his new business venture contrasted so heavily from his work as a newsman. His answer rotated back to his love for the country and desire to bring development.

“Sure, it’s a big contrast, but when you realize that I’m a trained transportation systems engineer who started a media company, that should tell you that I don’t feel any field should restrict me, especially when Liberia has so many needs.

“I was born during Liberia’s civil war, so for my entire life, I’ve felt that I was called to build up my talents and then use it to make Liberia better. When I was entering college, I chose to study civil engineering simply because when I googled Liberia, what I saw most was damaged infrastructure. I figured, why not consider something that can enable me to fix it?

“My decision to found The Bush Chicken was based on my frustration with the lack of ethics and the low quality seen within the Liberian media industry. I had no journalism background, but I thought I could do something to fix it.

“And now with Pinkberry, I want Liberia to enjoy the best of what people in America and other countries are enjoying, and not only that but to also create dozens of jobs in the process and make a sizeable investment into the economy, a testament to the opportunity in Liberia,” he explained.

The newsman added that ultimately, his life’s goal is, “to do whatever necessary to improve my home country.”

Krua acknowledged that there would be multiple challenges ahead for his new business. However, he noted that he would carry forward a few critical lessons that he has learned from running The Bush Chicken.

“One of the biggest lessons I learned that I’m trying to impart to my partners is for us to always treat our employees with respect and kindness. All of the reporters I hired when I started The Bush Chicken are still here with us, and more have come on board. That’s not normal, but it’s because I employ humility when dealing with the staff and I solicit their ideas not only on how to improve working conditions but also to grow the business. I’d like to believe they trust me every step of the way and know I’m always forthright and honest with them,” he said.

To close, Jefferson encouraged Liberians who have connections to tap into those networks to resuscitate the country’s image and its economy. In the case of young entrepreneurs, he encouraged them to “seek to establish partnerships as much as it fits the goal of their company. Not only will it help fill the deficiencies they may have as entrepreneurs, but they’ll also have others who can hold them accountable.”