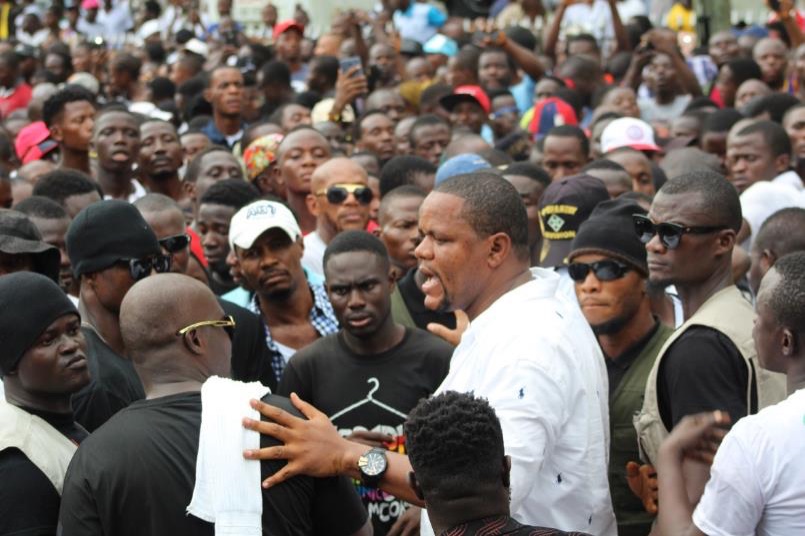 Liberians at home and abroad continue to make their case for and against the planned Dec. 30 â€˜Weah Step Downâ€™ protest being organized in Monrovia by the Council of Patriots, headed by talk show host Henry Costa.

Justice Minister Musa Dean has already come out against the planned protest, terming it â€œunconstitutional and treasonousâ€ for seeking to remove a duly elected government, but the protest organizers have made clear they will not relent.

The Bush Chicken embraces and supports the legal and constitutional rights of all Liberians, including members of the Council of Patriots, to speak freely, assemble and â€œto cause their public servants to leave officeâ€¦whenever their safety and happiness so require.â€ These rights, we believe, are consistent with Article 1 of the 1986 Liberian Constitution.

However, we would be remiss not to express concerns about the Council of Patriots and its eclectic band of leaders, political backers, and financiers.

It is well known that the groupâ€™s head, Henry Costa, along with other leaders such as Mohammed Ali, are staunch members of opposition political parties. Costa is a prominent member of the All Liberia Party of Benoni Urey.

Not too long ago, Costa was an affiliate of President George Weahâ€™s Congress for Democratic Change when the party was still in opposition. Having literally advocated for and against every side within the Liberian political arena as a radio host, Costa holds the dubious distinction of a â€˜hired gunâ€™ in the hands of the highest bidder. His once rosy political marriage with President Weah is evidence of his penchant to jump ship.

As for Ali, his longtime membership with the former ruling Unity Party of President Ellen Johnson Sirleaf, places his involvement with the protest squarely within the realm of opposition politics best dramatized at the ballot box.

A large segment of the Councilâ€™s leadership and financiers includes figures of questionable characters. Benoni Urey, a leader of the opposition ALP and one-time key lieutenant of former president and indicted war criminal Charles Taylor, suffered drastic U.N. Security Council sanctions and assets freezes related to allegations by the Councilâ€™s Panel of Experts on Liberia of illegal movements of weapons and money laundering. Sen. Oscar Cooper of Margibi, formerly of the National Patriotic Party and now a ranking member of the opposition UP, was also a lieutenant of the former President Taylor.

Others include Sen. Sando Johnson of Bomi, another former lieutenant of President Taylor; Sen. Darius Dillon of Montserrado, another one-time deputy in the office of former senator and now vice president, Jewel Howard-Taylor, the ex-wife of former President Taylor.

Most, if not all, of those backing the Council of Patriotsâ€™ call for President Weahâ€™s resignation are also members of a major opposition coalition, the Collaborating Political Parties, headed, once again, by Urey. The bundling of the opposition parties to call for Weahâ€™s resignation suggests that they now wish to gain politically what they lost at the ballot box in 2017.

It is not the legitimacy of the Council of Patriotsâ€™ right to demand the presidentâ€™s resignation that we at The Bush Chicken criticize. After all, what is opposition politics if not the pursuit of power at the expense of the incumbency? The allegations against President Weah seem credible enough.

Among the list of infractions, President Weah appointed and commissioned Liberiaâ€™s ambassador to the United States without Senate confirmation. His penchant for large-scale extra-budgetary spending is posing a serious detriment to the state. He appointed the head of the LEITI contrary to law, and his governmentâ€™s questionable application of US$25 million in a so-called â€˜mop-upâ€™ exercise has been flagged by at least two independent reports for malpractices. These actions are worthy of concern, and we do not condemn the Council of Patriots for drawing attention to them.

Instead, what we criticize is the hypocrisy of the idea that a cabal of misfits and dodgy political characters lurking behind a popular radio talk show host can accuse the president of misdeeds of which they themselves are also complicit.

If President Weah is responsible for any serious constitutional or legal breaches, we are certain that those sins are ones in which the very backers of the Council of Patriots in the legislature are grossly complicit. As legislators, they have either done nothing to rein in the presidentâ€™s excesses or have directly enabled those excesses.

Even as the opposition called on President Weah to publicly declare his assets, the vast majority of opposition lawmakers, who make up the majority of lawmakers in the House of Representatives, have still not done so. When President Weah appointed his ambassador to the U.S. without seeking the Senateâ€™s confirmation, as required by the constitution, lawmakers simply asked that the ambassador come back for confirmation. No senator launched legal actions against the president and no impeachment proceedings were initiated.

If President Weah is incompetent, corrupt, and visionless, the Council of Patriots and its opposition backers are neither an attractive alternative. Their long and checkered record of governance in both the Executive Mansion and Capitol Building leaves much to be desired.

Liberia may deserve better than President Weahâ€™s Coalition for Democratic Change. But it also certainly deserves better than Henry Costa and his backers within the Council of Patriots. If the second black republic can ever regain its glorious past as a leader in Africa, it must urgently cultivate a new crop of uncompromisingly ambitious, educated, honest, patriotic, and visionary leaders capable of suspending self-gratification for the long-term collective good of all Liberians.

With the ominous cloud of a â€˜Weah Step Downâ€™ campaign hovering over Monrovia, and a major constituency and presidential elections scheduled to take place in 2020 and 2023, respectively, we hope that such leaders emerge upon the national podium sooner rather than later.