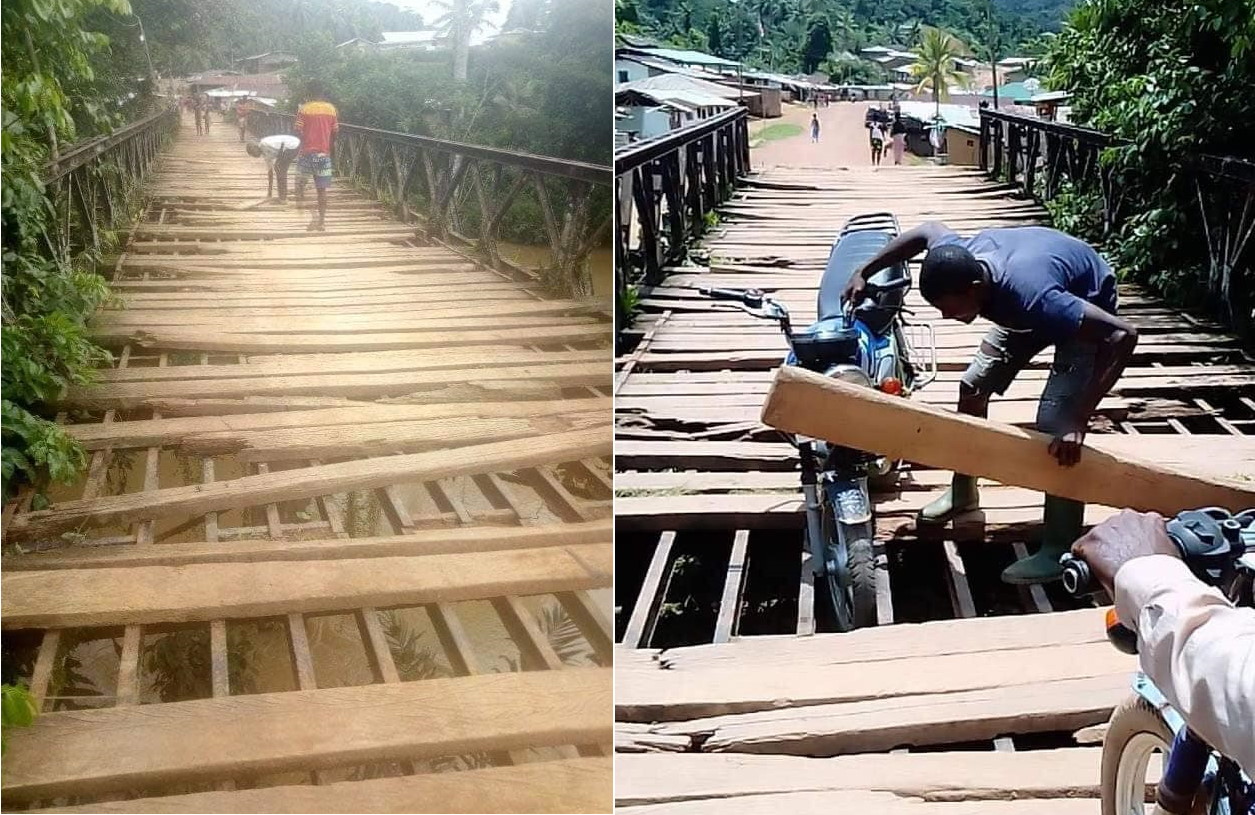 JOEQUIKEN, River Gee – Dangerous conditions at a key bridge linking River Gee and Grand Kru have led regular users to call on the government for intervention.

Prominent residents of Joequiken, a densely populated gold mining camp of Nyeniwliken District, gathered last week to speak to reporters about the conditions of the bridge. Constructed in the early 1970s, the bridge has not received any rehabilitation for decades, they noted.

Wood beams from the bridge deck now expose the river below, creating an unsafe environment for motorists.

Kebeh Johnson, a local trader living in the area, said besides posing a threat to her life, the poor quality of the bridge has increased the cost of doing business, as large trucks cannot safely traverse the bridge.

Prince Trawally, a trader who was traveling to Grand Kru, added his voice: “Look, we are risking our lives on a daily basis just for our families to survive and to send our children to school.”

He added, “Forpoh Parluken, and Buah Geeken in Grand Kru County are not that far by means of passing through Joequiken, but this damaged bridge is putting us into more expenses. We are suffering. So let the government see about this bridge.”

The motorcyclist union president of Nyenwiliken District, Mountain Weah, also noted that the bridge’s condition was making it difficult for his members to support their livelihoods. Most commercial motorcyclists run local traffic and avoid traveling into Grand Kru, which would be a more lucrative route. He believes a rehabilitated bridge would promote better trade and free movement of people between the two counties.

Travelers heading from Barclayville, Grand Kru to River Gee’s Fish Town now pay L$7,000 (US$40.69) per person because of the longer route.

Because Pres. George Weah hails from Grand Kru, many are hoping that he will intervene to prioritize the bridge’s maintenance.

Meanwhile, Nyenwiliken District’s administrative commissioner, Sylvester S. Toe, said discussions are ongoing with the two counties’ legislative caucuses and the executive branch to rehabilitate the damaged bridge. However, he said the government still needs to source the funding.

Pres. Weah has repeatedly declared road construction is his administration’s priority since taking office in January 2018. Propagandists from his political party have even dubbed him “bad road medicine.” However, many residents in Liberia’s southeast observe that much of the road projects the administration had undertaken or completed so far have been concentrated in the capital, Monrovia.