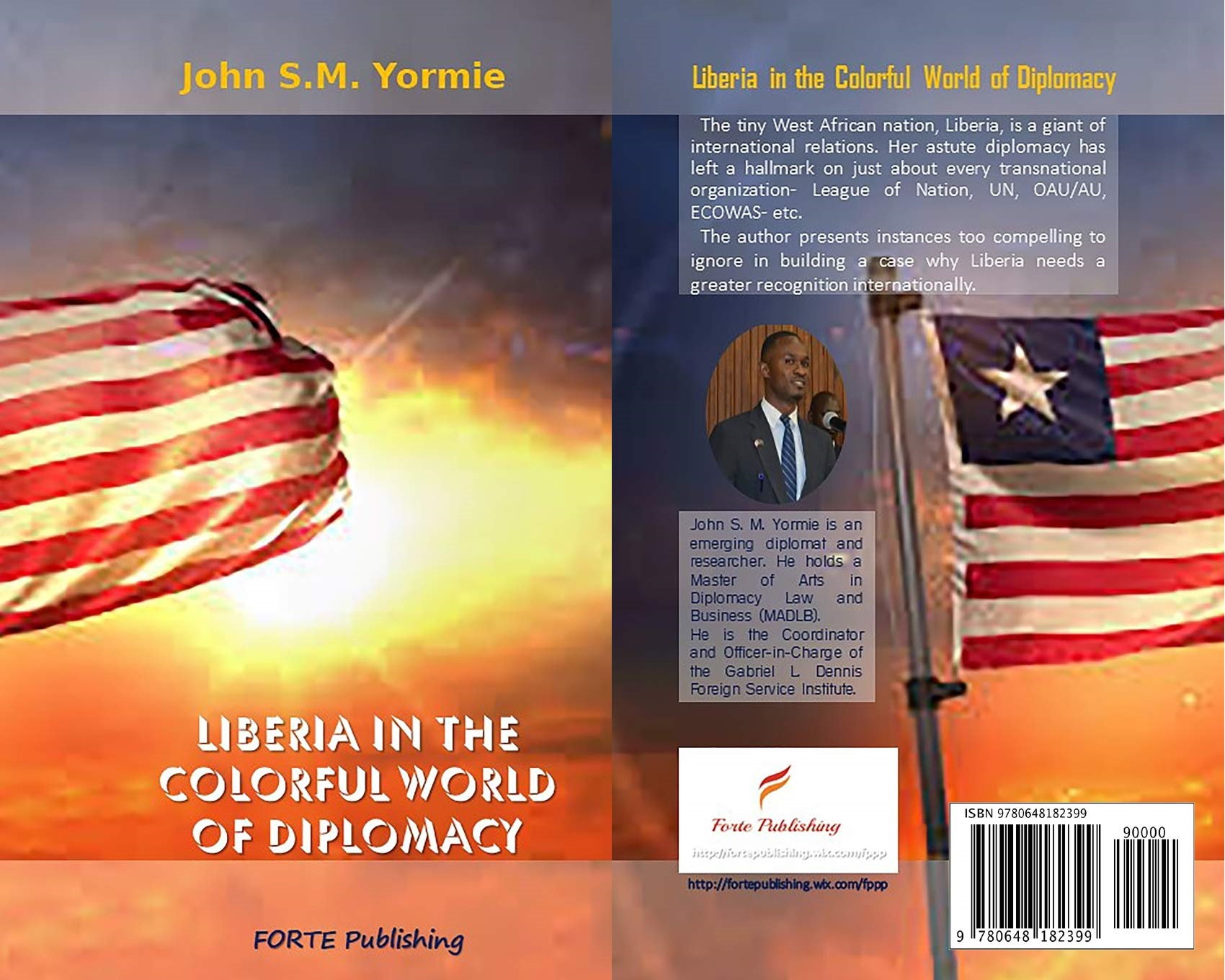 On July 26, 1847, the land now called Liberia declared its independence as the first democratic African nation. The country has undergone several challenges in the diplomatic sphere since its independence. As with any new government, Liberia’s diplomatic journey has had its challenges. In his debut book, Liberia in the Colorful World of Diplomacy, author John S. M. Yormie, Jr., an aspiring diplomat at the Monrovia-based Gabriel L. Dennis School of Foreign Service, elegantly and engagingly details Liberia’s landmark participation during the formation of major diplomatic institutions, while giving critical analysis about the impact of the first African republic’s membership and pivotal role in those organizations.

In doing so, Yormie recommends several international relations themes, such as constructivism and liberalism or neoliberalism, without subscribing to one particular idea as a solution to Liberia’s diplomatic problems.

Delving into the country’s history as the first independent African republic, the book emphasizes the historic role Liberia has played in the formation of major international bodies. For example, the author recalls that Liberia was the only African country on January 10, 1920 signing to establish the League of Nations—a precursor of the United Nations.

Liberia’s robust and exemplary diplomatic activities came to global limelight in 1969. The country’s permanent representative to the U.N. at the time, Angie Elizabeth Brooks, earned the distinction of becoming the first African female president of the United Nations General Assembly in New York. Yormie probes these historical illustrations to point out that the history of Liberian diplomacy is not short and feeble, as most would assume. Instead, it is a long history, and, as the author appropriately stated in the title of his book, it is a “colorful” history.

In addition to the broader theme of Liberia’s engagement in international diplomacy, the author sketches the country’s involvement in regional diplomacy, to include the formation of the Mano River Union in 1973, initially a bilateral relationship between Liberia and Sierra Leone, before the later inclusion of Guinea and Ivory Coast.

Specifically, Yormie notes that the MRU was founded because of the cultural and economic interconnectivity among the sub-regional countries involved, not solely based on the commercial interaction between states, as assumed by liberalists, or security and power concerns, as emphasized by realists.

While Yormie seemingly shows a lukewarm attitude toward the theory of liberalism, he barely mentions realism as a theory that Liberia should traffic in, while giving well-hearted endorsement to constructivism.

Yormie structured his book by outlining a specific topic. He then digs into an in-depth analysis of that topic. As readers, it is imperative to follow the author’s full step of analyzing Liberia’s past diplomatic standing, which helped ensure the nation’s bright diplomatic future. Besides, there are too many things to explore; not studying them would be a sort of malpractice.

The author seems impressed with Liberia’s involvement in the formation of several international, regional, and sub-regional bodies. For instance, many Liberian diplomatic historians consider the July 1959 summit involving President Ahmed Sekou Toure of Guinea, Prime Minister Kwame Nkrumah of Ghana, and President William V.S. Tubman in Sanniquellie, Nimba as the foundation of what is today known as the African Union, formerly the Organization of African Unity.

For this and other reasons, the author lavishes praises on the leading role played by arguably the nation’s foremost pan-Africanist leader, President William Richard Tolbert, Jr, in the formation of many of those organizations. From all indications, the author is pleased with Liberia’s pioneering roles in crafting all these organizations because he considers them beneficial for the nation.

Indeed, in some instances, Liberia’s pivotal role benefitted the country tremendously. However, the benefits have not been sustained over time. While the formation of the AU was a fantastic beginning, it would have been even more beneficial if the African Union had established a headquarter or even an office in Liberia. In any case, it is understandable that the AU’s headquarter is located in Ethiopia, which is the continent’s oldest self-governing nation because, in Africa, age is tremendously accorded due deference.

On a similar note, there is no MRU office in Liberia. It goes without saying that we should not be merely pleased with Liberia’s historical diplomatic standing only because it was a pioneering force in the formation of these organizations.

However, the author’s advocacy of constructivism as a practical theory for Liberian diplomats, or Liberia diplomacy, is highly instructive. Constructivism – the focus on norms and culture – can help Liberia significantly forge relationships with its most prominent and most influential diplomatic partner, the United States of America.

Liberians and African Americans have many direct identities. In a constructive framework, Liberian diplomats can form a relationship with African American advocacy organizations such as the National Associations for the Advancement of Color People. Such constructivist interactions could create an army of internal activists in the U.S. for the Liberian republic that will be more influential than any single Liberian ambassador.

In sum, Yormie’s book is an elegant presentation of the long and “colorful” (as he will say) history of Liberia in global affairs. The book is a historical excerpt from Liberia, but it also offers an in-depth analysis of the underlying bureaucratic issues. Anyone looking for an introductory understanding of Liberia in the diplomatic world should start with Yormie’s well-researched book.