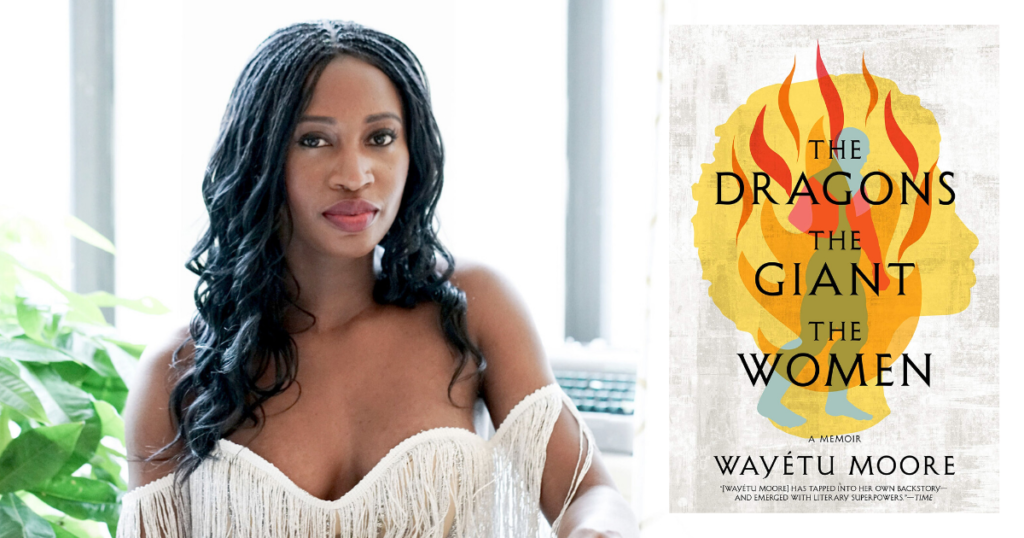 When Wayétu Moore’s The Dragons, the Giant, the Women was released a few months back, I initially chuckled when I stumbled on a social media post that dubbed it a ‘debut memoir.’  I appraised the term a bit more, and as I reflected on the youth of the author (she’s 35 if I’ve correctly calculated), I concluded that perhaps the qualifier might be appropriate. After reading the book, I am now able to contemplate (and accept) the ‘debut memoir’ genre much more fully.

While there is a considerable detour to New York, Connecticut, and Texas in the middle, the narrative primarily focuses on a brief snatch of Moore’s childhood in Liberia during the early stages of the civil war: April 1990 to January 1991. Moore is an extremely confident storyteller. Whereas many African writers published in the West are justifiably critiqued for diminishing their story by deploying a voice and style that caters to oblivious white readers, Moore largely avoids this pitfall.

At the same time, her story is a poignant account that will make even the most hardened and dispassionate reader feel emotional. As the civil war erupted, Moore was living with her father. She was separated from her mother, who was studying at Columbia University in New York City on a Fulbright Fellowship. The initial part of the book is told from the voice and perspective of Moore at the time of Liberia’s harrowing turmoil. As a five-year-old overwhelmed by efforts to make sense of the war, Moore grapples with the country’s collapse through the prism of a mythology concerning the Hawa Undu dragon, a former prince with once good intentions.

The cadence and tone of this initial section of the book reminded me of Moore’s debut novel (which I have only perused). The writing is described on the jacket flap by the publisher as “lush, lyrical.” It certainly is, often to the extent that in the first section, I felt myself sharing in the bewilderment that young Wayétu must have felt at the time. I suspect the challenging nature of the prose in this first section, entitled ‘Rainy Season,’ would well reward a second reading. The narration is reminiscent of the approach pursued by Uzodinma Iweala in Beasts of No Nation, although I believe Moore’s approach is more sophisticated.

The style changes, quite considerably, as the action moves into a ‘Dry Season’ section, set in the U.S. The writing is more straightforward and direct (yet covering a wider swathe of time) as Moore describes her youth and young adulthood in Connecticut, Texas, and New York, the challenges of being an immigrant, and the refuge of the ‘Blackgirl table,’ her middle school lunch companions.

Moore writes “that Liberia lived with me every night, in my dreams, that I wear it on my skin and in the rhythm of my love stories.” For about a quarter of a century, she does not return to the country that she fled in dire circumstances with her father and two sisters.

In the aftermath of a break-up with ‘Johnny Boy,’ a liberal white lover with a penchant for condescending and offensive racial microaggressions, Moore is emboldened to confront her dragons and return to Liberia (her parents had recently repatriated as well). This component of the book reminded me of the later parts of Helene Cooper’s The House at Sugar Beach. The similarity gathers pace as much like Cooper’s quest to reunite with her long-separated adopted sister, Moore craves a reunion with the woman hired by her mother to escort their family to safety in Sierra Leone.

However, Moore discomforts her reader by drastically upending the chronological narrative that has traveled into more contemporary discussions of American racism and ignorance. In the final sections of the book, we do not venture into a discussion of Moore’s burgeoning success as a writer (perhaps the basis for an encore memoir?).  Instead, we return to the early 1990s and are treated to a backstory on the escape to Sierra Leone from the perspective of Moore’s mother, Mam.

The Dragons, the Giant, the Women is not only non-linear, but it also reads (throughout its entirety) more like a novel than a work of non-fiction. It challenges readers and does not cater to their ignorance or innocence. It simultaneously manages to appeal to a wide audience. Those interested in Liberia’s civil conflict, race, and gender will all find something that speaks to them. Some readers may find the first section hard going, but more than most uneven books, it is worth keeping the course.

Sharing
Tags Wayetu Moore
Contributions to The Bush Chicken are not tax deductible.