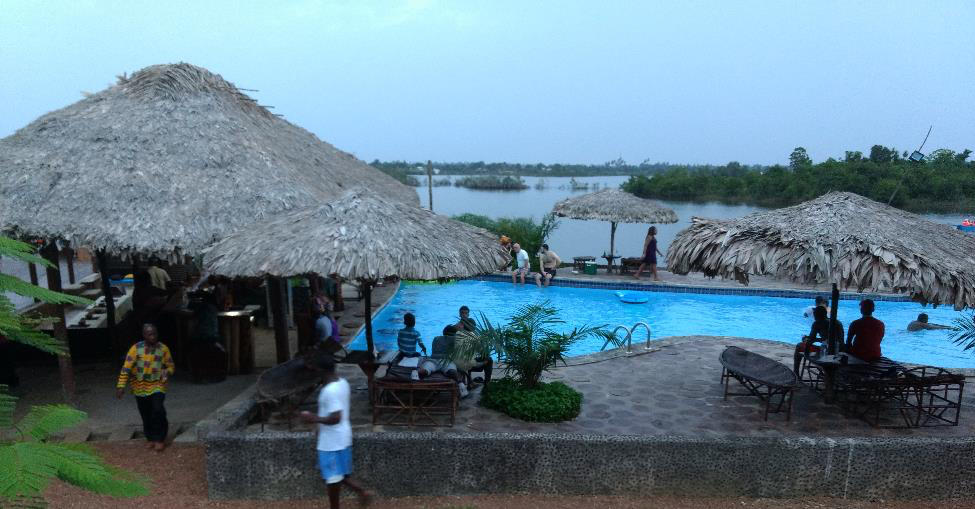 Imagine a resort that displays the best of Liberian culture, arts, and designs and blends well into nature for a seamless vacationing experience.

Imagine an exquisitely carved wooden bar that serves soursop colada along a cerulean swimming pool shaped like the map of Liberia, with the Lofa and Cape Mount end sprinkled with submerged barstools that allow swimmers to imbibe drinks while in the pool.

Imagine soft comfortable mattresses planted into locally made bed frames that could be mistaken for living trees.

Imagine nights immersed in performances by cultural dancers, models traversing the catwalk, Liberian standup comedy, and a live band, all next to a wooden deck of a restaurant thatâ€™s situated on a slow-moving river where patrons can go canoeing. This was the story of Elizabeth Village, a promising resort that recently opened about a 15-minute drive from Buchananâ€™s city center, along the banks of the Benson River.

The resort held its official opening on the weekend of the December 16, but instead of it being a celebration of all those aforementioned features, a botched opening will likely make Elizabeth Village a cautionary tale of the dangers of opening an establishment before prime time.

The resort touted the weekend as its grand opening, but it was far from ready. Upon arriving at the resort, loose soil could be seen all around the parking lot. Moreover, the facility lacked a lobby, as it was still under construction. Patrons seeking their rooms had to seek out a woman named Love, and finding Love was not an easy matter.

Patrons lucky to finally be assigned their rooms found that not all came with keys. In fact, one patron was overheard quipping, â€œIn the real villages, people donâ€™t usually lock their doors anyway.â€ In these rooms, a less than ideal plumbing situation presented itself â€“ some toilets could not flush. Others that could did so with such little pressure that more solid pungent waste would not find their way down too easily. There was also no hot water, although thatâ€™s not a terribly major problem, as the resort staff bring hot water in buckets to patrons in the morning. Besides plumbing, there was an issue with the food. At one point in the evening, the wait staff said they would no longer accept orders for items on the menu because there was a buffet. That buffet started at a price of US$15 but then, almost as soon as the price was announced over the microphone, the MC consulted with the kitchen and brought the price down to US$10.

Suffice to say, the food did not look, smell, or taste like it was worth either price. The presentation left much to be desired â€“ instead of being deliberately put together to draw the eatersâ€™ attention, it seemed as if someone rushed by the nearest supermarket to buy aluminum foil containers to throw in the food. In the containers, the food was left uncovered, attracting flies. The different foods available had no labels, which presented a less than ideal situation for those with food allergies. Moreover, the resort seemed to have much fewer plates and utensils available than the number of clients they had â€“ patrons were always waiting for something to be washed.

The multitude of problems were disappointing for such a promising venue, as there is almost nowhere that one can find a place at the higher end of the price spectrum that celebrates Liberian culture, food, and arts to that extent â€“ especially at a venue that is Liberian-owned.

Elizabeth Village has the potential to be a refreshing island in a sea of copycats who seem to think Lebanese food is the only cuisine worth eating and that Liberian culture is not worth showcasing. At what other lodging accommodation can you receive a traditional Liberian breakfast of plantain and potatoes followed by freshly made coconut pie?

Hereâ€™s to hoping Elizabeth Village gets its act together.