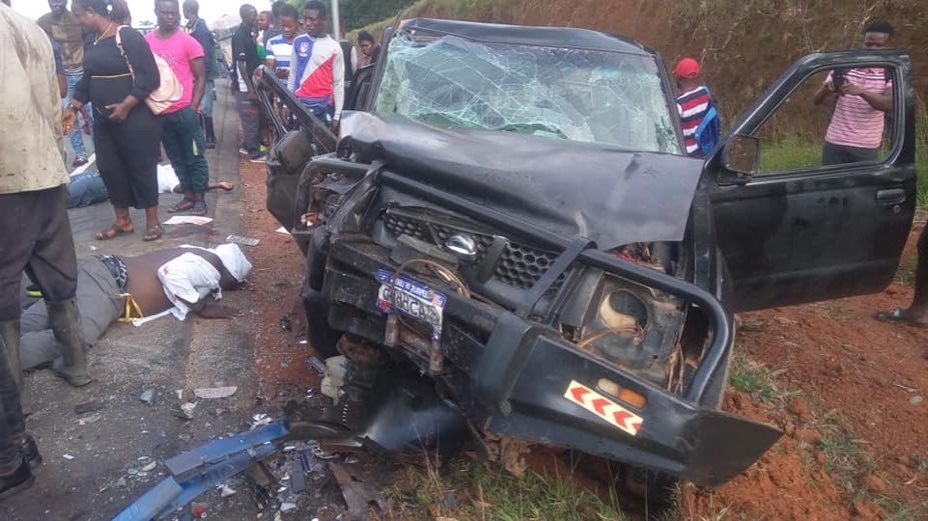 BUCHANAN, Grand Bassa â€“ A tragic accident along the Buchanan-Monrovia highway on Thursday, August 22 has left one person dead and several wounded.

The accident occurred not far from Buchanan when a speeding white minibus from Monrovia heading to Buchanan hit the bank of the Benson River bridge and somersaulted twice to face the same direction it came from.

According to eyewitnesses, the bus was speeding so excessively that the driver could no longer control the vehicle as it approached the curve.

The minibus became completely damaged and was dragged on the side of the road to allow other vehicles plying the route to move smoothly on the order of police authorities.

Immediately after the accident, a pickup truck belonging to Grand Bassaâ€™s Sen. Jonathan Kaipay was used to transport 11 passengers with minor wounds to the Catholic Hospital in Buchanan.

The minibus contained 16 passengers, including 10 males and 6 females. There were two children involved in the accident, of ages nine and four.

Five persons who were in critical conditions were taken to the John F. Kennedy Memorial Hospital in Monrovia, transported by a vehicle assigned to Grand Bassaâ€™s superintendent and another bus.

Many of the passengers suffered injuries to their heads and limbs, and a video of the aftermath of the scene showed passengers with bones visibly broken.

The driver of the bus, identified only as Emmanuel, was pronounced dead upon arrival in Buchanan. His body is expected to be turned over to his family members.

In 2018, the World Health Organization ranked Liberia as having the worst road safety record, with an estimated 35.9 deaths per 100,000 people. The chief of the Traffic Section of the Liberia National Police, Alphonso Bindah, has also said the police records a little more than 100 cases of road traffic accidents each day. Additionally, he said one death and six injuries are also reported daily.

In most countries around the world, accidents that regularly occur in Liberia are prevented by regular safety inspections and ensuring that drivers are properly trained. However, in Liberia, the Ministry of Transport, which has the legal obligation of ensuring that vehicles are inspected before allowing them on roadways, does not physically examine vehicles before registering them, as prescribed by the Vehicle and Traffic Law.

The Liberia National Police, which is responsible for enforcing traffic regulations once the vehicles are approved to ply Liberiaâ€™s roads, admitted to the challenges of enforcing road safety policies. In a 2018 interview with The Bush Chicken, Deputy Police Commissioner John Saah, who is the chief for public safety, confirmed that at least half of the cars currently in the country are not roadworthy, but he said the police did not have a policy to ban such vehicles.

Saah also told The Bush Chicken that since the civil war, testing for applicants for driving licenses do not include testing of physical driving skills. He said there are currently no cars available to test individuals who apply for licenses.

He also admitted that because most drivers do not read and write, understanding road signs and signals is a serious challenge for them.