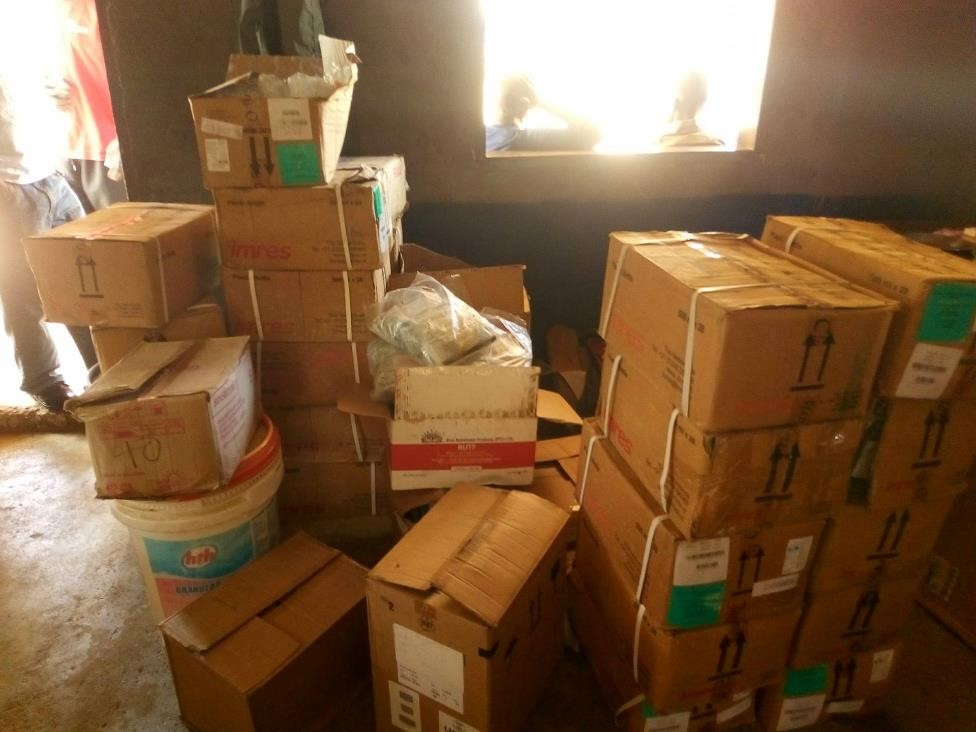 BUCHANAN, Grand Bassa â€“ Amid reports of shortages of drugs at health facilities across the country, police in Grand Bassa have confiscated a large consignment of drugs and other medical supplies at the Owensgrove checkpoint.

The supplies were seized on Wednesday, March 14, 2018 by joint security assigned at the checkpoint at 6:10 a.m. onboard a white unmarked Nissan pickup heading towards Monrovia.

Inscriptions on some of the cartons suggest that the supplies were donated by the Sri Lankan government during the Ebola outbreak for use in public health facilities. The cartons also contained the label of the Ministry of Health and Social Welfareâ€™s Supply Chain Management Unit. They also contained information suggesting they were destined for distribution in Nimba.

The supplies were found in the possession of a 36-year-old Chukwu Sompon, who said he had purchased them from a private citizen in Sinoe. He declined to disclose the name of the individual who sold him the supplies.

According to the statement he provided to the police, Sompon said he was traveling from Sinoe to Monrovia with a police officer, George F. Kangar, who was part of the illegal operation. Sompon said Kangar and an officer of the Liberia Drug Enforcement Agency had an altercation, which led to the discovery of the medical supplies.

Kangar had claimed that the drugs onboard the vehicle were owned by Grand Bassaâ€™s Sen. Nyonblee Karnga-Lawrence, however, when contacted, the senator denied knowledge of the operation. Some of the supplies appear to have been donated by the Sri Lankan government during the Ebola outbreak. Photo: Sampson David

The Liberia Drug Enforcement Agencyâ€™s commander in Grand Bassa, Joseph Targedine, has said that the medical supplies,Â  Sompon, and the vehicle would remain in custody until an investigation was conducted.

He also said Officer Kangar would be questioned by a joint security team and would remain in the LDEAâ€™s custody until the investigation was complete.

When contacted about the incident, Grand Bassaâ€™s county health officer, Anthony Tucker, initially said he was not aware of anyone being arrested with medical supplies in the county. However, he said he would dispatch his team to inquire more.

In Nimba, where the supplies were originally destined to be delivered, the county health officer, Collins Bowah, told The Bush Chicken that he had checked with his team and there were no medical supplies missing from their storage.

â€œI contacted my county people and we donâ€™t have any hitches,â€ he said. â€œSo far, everything is intact; in fact, we received supplies February 9 but the distribution in the districts has been very slow.â€

Bowah said even though he has detected no foul play, his county always has a shortage of drugs, which often drives members of the county health team to use their own money to purchase drugs for patients.

He called for the police to thoroughly investigate the case.