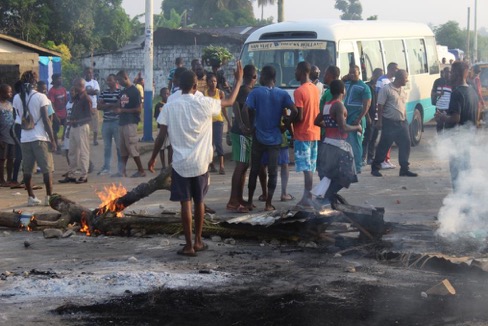 CALDWELL, Montserrado â€“ On Monday, December 3, several aggrieved residents in the Caldwell community outside Monrovia gathered at 4 a.m. to set up a roadblock to demand electricity from the Liberia Electricity Corporation.

The residents, who burned tires, tables, benches, and logs in the middle of the road, left commuters stuck in traffic for several hours.

Some of the protestors complained that they are tired of paying huge amounts of money to private electricity suppliers while high-voltage wires from the Mount Coffee Hydro Plant passed through their communities to serve other areas.

â€œWe have long planned this action because we are tired with the lies from LEC,â€ one protester was heard shouting. â€œEvery time, they will tell us that current will be in our communities before Christmas festivities and today is December 3. We are not seeing anything like wires being connected to the various poles planted.â€

The situation immediately became tense when officers of the Liberia National Police were called in to bring the situation under control. The protestors started throwing stones at the officers, who responded by shooting tear gas into the air.

Bystanders and protestors alike started running in different directions to seek shelter. The police eventually brought the situation under control and rounded up several protesters. Immediately following the protest, Moses Carter, the chief for press and public affairs, confirmed to journalists at a press conference that the police had used non-lethal weapons on the protesters.

Carter called the actions of the protesters an infringement on the rights of others who he said are entitled to unhindered freedom of movement as guaranteed by the constitution. He also said their actions violated multiple penal laws against obstructing highways and disturbing public order.

â€œThese acts of lawlessness have to stop,â€ he said. He said there were some individuals among the protesters who were looting.

â€œIf it was not because of the intervention of the LNP, it would have been a different story,â€ the police spokesperson said.

He warned community residents who set up roadblocks to desist or risk facing the full weight of the law. Mambu James Kpargoi, LECâ€™s public relations manager, told The Bush Chicken that LEC and a contractor had been working on a project to extend electricity supply to Caldwell. However, Kpargoi said the project was ordered halted by the World Bank pending the issuance of an environmental social impact assessment permit by the Environment Protection Agency.

â€œThe project proceeded with the planting of poles about ten months ago and was halted within a week,â€ he said.

The assessment has since been completed, he said, and the World Bank now needs to submit the report to the EPA, which will issue the permit, allowing the work to resume.

Protests over electricity supply have often taken the form of roadblocks along key routes. They have become increasingly common in areas around Monrovia.