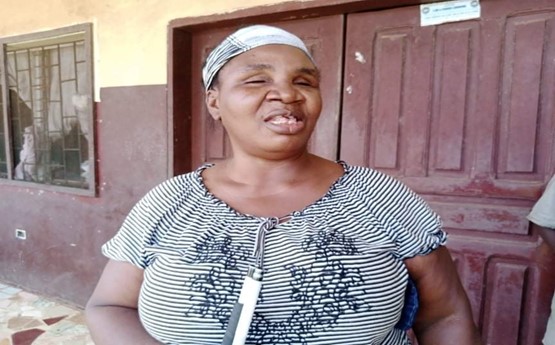 FENDALL, Montserrado – A physically challenged student at the University of Liberia’s Fendall Campus, Beatrice Snyder, says she finds it difficult attending classes because almost all of her classes are on the first and second floors of the imposing structure constructed by the Chinese government as a gift to Liberians.

Snyder, a member of the university’s Association of Disabled Students, said challenges people with disabilities face at the university discourage them from obtaining higher education.

“There is no suitable pathway for people with disabilities at the biggest public school in the country,” Snyder said. “And we are not seen to be recognized by society to have these things available for us.”

She says stairs and ramps should be available at all public buildings for the disabled to have access. People should avoid putting steps within a floor in a building, where possible. Where stairs are necessary, she suggests that the facility provide a ramp or platform lift as appropriate.

“Accessible lifts in all new buildings that have more than one floor should be provided, making sure that the lifts are designed to best practice guidelines,” she added.

Elijah Manyon, a visually impaired student, says members of his community are not guaranteed formal education at institutions of higher learning. Manyon, an advocate at the Liberia Christian Association of the Blind, lamented that there is no support for the visually impaired in Liberia.

“For the blind to get educated is very difficult here. We’re supposed to be educated through the Braille system, but this is not available to a majority of us,” he said.

Braille is a tactile writing system used by people who are visually impaired. It is traditionally written on embossed paper. Users can read computer screens and other electronic supports using refreshable Braille displays.

Some students with visual impairments usually carry voice recorders on campuses to record lectures which they later transcribe in Braille.

“This is tedious and time-consuming, and, sadly, it is not everyone who has access to a voice recorder or is able to go through that long process,” he said.

The 2008 National Housing and Population Census counted 110,000 disabled persons in a population of 3.48 million. Liberia is estimated to have added over a million persons since. Disabled persons are often marginalized and discriminated against, making it hard to access the education system, the job market, and health services.

Manyon blames the government for lack of support to the community. “We are not being supported by this government,” he said. “The Pro-Poor Agenda promised to pay special attention to vulnerable people – to those who are at the margin of society. Unfortunately, this framework has, to a significant extent, failed to benefit persons with disabilities.”

Like Manyon, Perkins Boye, the head of the University of Liberia Association of Disabled Students, stressed that university and college campuses in the country are not accessible.

“At times, people with disabilities miss out on classes because we are often denied by our colleagues who are not physically challenged to help us climb the stairs,” Boye said.

Human rights activists say to live dignified lives in any society, people with disabilities should have access to services and devices that facilitate their participation in the community on an equal basis with others.

People with different types of disabilities require differentiated services, including assistive equipment such as motorized wheelchairs and elevators in public buildings may be essential for some.

They note that all people with disabilities should have the right to access the physical environment, including buildings, roads, schools, housing, medical facilities, workplaces, and other facilities—giving them the right to live independently and be included fully in their communities.

But this is not the case in Liberia, as people living with disabilities complain that their rights as human beings are being violated. According to them, they have been denied the use of all public facilities, including hospitals, colleges, and universities, because these facilities are not accessible to them.

The deputy director for administration at the National Commission on Disabilities, Fallah Boimah, corroborated the assertion of the aggrieved members of the disabled community.

He said much is not being done to include disabled people in society adequately: “Persons with vision impairments are not given special attention at universities in Liberia.”

In 2012, Liberia signed and ratified the United Nations Convention on the rights of persons with disabilities.

Article 24 of the U.N. Convention on the Rights of Persons with Disabilities stipulates that countries must take steps to ensure that persons with disabilities access an inclusive, quality, and free primary and secondary education on an equal basis with others in the communities they live.

Liberia developed an act that established a National Commission on Disabilities to address the rights of people in that category. However, legal protection of the rights of disabled people is still fragile. The constitution also guarantees the rights of every Liberian, including people with disabilities.

Article 6 of the constitution states, “The republic shall, because of the vital role assigned to the individual citizen under this constitution for the social, economic, and political wellbeing of Liberia, provide equal access to educational opportunities and facilities for all citizens to the extent of available resources.”

Boimah told The Bush Chicken that no institution in Liberia is equipped to help the visually impaired students, let alone the cash-strapped University of Liberia.

This story was produced with support from Journalists for Human Rights through its Mobilizing Media in the Fight Against COVID-19 in partnership with FrontPage Africa and The Bush Chicken. Featured photo by Rita Jlogbe.

Sharing
Tags National Commission on Disabilities
Contributions to The Bush Chicken are not tax deductible.