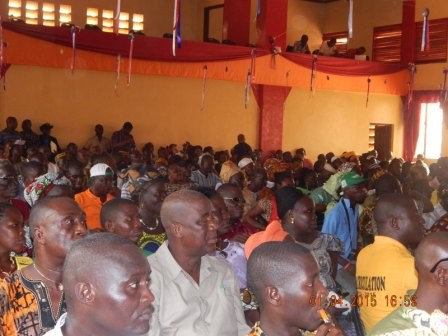 GBARNGA, Bong – The Constitution Review Committee has ended a four-day National Constitution Review Conference in Gbarnga. The four days exercise brought together delegates from the fifteen subdivisions and the Diaspora to vote on 25 issues to be forwarded for amendments to the 1986 constitution including reducing term durations for political offices and making Liberia a Christian state.

Speaking at the official opening, President Ellen Johnson Sirleaf said the constitutional review is a result of the strong desire of citizens to see adjustments made to the 1986 constitution.

She said Liberians expressed this desire at several national conferences, including the one that led to Liberiaâ€™s plan to transform into a middle-income country, Vision 2030. Other conferences such as the land reform and decentralization initiatives have seen delegates suggest modifications to the constitution.

The delegates also unanimously agreed to include mineral resources in private property ownership and grant owners of land mineral or natural resources the right to be part of negotiations and share benefits accrued by the government.

Delegates at the conference in a head-count voted to affirm the current laws against dual citizenship and non-negro citizens. They also voted to abolish the current dual currency setup and prevent businesses and individuals from refusing mutilated Liberian dollar notes.

Liberians at the conference decided that superintendents, commissioners, mayors and chiefs be elected instead of being appointed by the president.

The delegates also granted recognition to persons with disabilities within the constitution with provisions for their education and job opportunities.

The delegates accepted that concession negotiations for natural resources should include local authorities and citizens of the locality in which the natural or mineral resource is situated.

The conference also resolved that constitutional provisions should prioritize the participation of Liberians in economic activities and that traditional communities should own their land and be a party to any negotiation with investors or concessionaires on said land.

It also resolved that childrenâ€™s rights should not interfere with the parental duty to discipline children.

In other issues, the delegates voted unanimously to make Liberia a Christian nation, that customary laws be made constitutional and that the constitution should guarantee inheritance rights for women in traditional societies.

The citizens also unanimously agreed that women should have access to equal economic and social opportunities. Along this line, the proposed constitution, and all legal documents should state “he/she” as opposed to “he.” The delegates also proposed that the age of marriage for girls should be at least eighteen years.

Out of the 25 issues for amendment, the delegates rejected the view that the Vice President should not preside over the Senate. They also rejected the proposal that the chief justice and election commissioners should be elected by citizens and not appointed by the president.

The delegates also rejected the view that people in prolonged cohabitation should be considered to have entered a common-law marriage.

The results of the conference will be submitted to the president for onward submission to the legislature who will order a national referendum for the issues to be considered.

Except for the Congress for Democratic Change, all political parties refused to participate in the voting process.

According to some political party representatives, the 25 issues were sensitive and delicate and it was not expedient to vote on them in the open.

They said, to have a valid record of the process it was important and lawful to conduct the process on secret ballots instead of through head-counts. When their proposal for secret ballots was defeated in votes, the parties resolved to abstain from the process.

Horatio Gould, Chairman of the Alternative National Congress said that matters of such importance should not be voted on through headcount. â€œWe are simply asking for ballots so that there can be records for tomorrow and in ages to come so people can refer to them,â€ he said.

He said a ballot would better serve as evidence if there are contestations in the future about the results and so that a recounting could be done.

â€œIt does not matter if the CRC (Constitution Review Committee) listens to us or not, but we will not [partake in] butchering our constitution,â€ he added.

Mamensi Kabba, an accredited observer to the conference, described the entire voting process as fraudulent and that the Liberian peopleâ€™s money was being wasted unnecessarily as the results do not reflect their view. She condemned the votes by head counts and said that the constitution supports secret ballots.

â€œMy recommendation is that the government of Liberia must re-strategize and be serious, stop making [a] mockery of the Liberian people because, if you want to revisit our constitution, you must be realistic and it must be done holistically,â€ she said.

However, a delegate representing marketers in Montserrado County, Elisa Baysah, said she was disappointed by the decisions of political parties to boycott the voting process after a defeat of their proposal for a secret ballot.

According to Baysah, she voted in support of head-counts because it is more transparent.Â â€œI supported head-count because I wanted a transparent process,â€ she said. Reactions to Term Limits and Duration

Delegates expressed mixed views about the organization and results of the conference.

Ruben Duo, Paramount Chief of Kabba Chiefdom in Margibi said he was happy with the proposal to amend the provisions for terms and tenures of the president, senators, and representatives. Duo said the reduction of terms and limitation in tenures for the three positions would reduce disenchantments and impatience among citizens for change.

â€œI also believe that [with time], more young people would have a chance to serve their people,â€ he said.

Esther Clark, the President of the Rural Women of Margibi said she was happy to be part of history making by participating in the constitution review process.

She also supported the proposed amendments in the terms and tenures of the president, senators, and representatives.Â According to her, the amendment, if passed, will make leaders effective. On restoring Liberia to a Christian nation, Clark said though she hails from a Muslim background, she strongly supports the proposed amendment.

â€œWhen we were born, we heard and saw in the constitution that Liberia was a Christian state so I support the view to restore that clause,â€ Clark told The Bush Chicken.

Fata Sheriff, a Muslim youth representative condemned the proposal to return Liberia to a Christian nation.

She said changing from a secular to a Christian nation would breed conflicts and religious intolerance that could disturb the countryâ€™s peace. One of the posters read, â€œ[Goodbye] to peace in Liberia.â€

George Sackie, a citizen of Bong County, said the government should act seriously on threats made by Muslims.

Engaging the Diaspora with Dual Citizenship

At the same time, Liberians in the Diaspora have expressed disappointments in the mindset of others against their support for dual citizenship.

Bobby Whitfield, the President of the Liberian Community of Organizations in Australia said Liberian minds have been infected with myths on the disadvantages of dual citizenship. Whitfield said it was important that Liberians who went into exile due to the war be welcomed as citizens and not be discriminated against.

John Nimly Brownell, President of European Federation of Liberian Associations, said that the voting for the view on dual citizenship was not transparent.

â€œPeople on the floor said the results were flawed and we are taking our case with the organizers,â€ he said. According to Brownell, Liberians were not given the real meaning of holding dual citizenship and there needed to be more time and forums to explain their position.

â€œWe did not say [the]Â white man should become [a]Â citizen here, we are talking about me, my brothers and sisters in Europe, Australia, America and Ghana among others,â€ Brownell said.

â€œItâ€™s quite unfortunate that the Liberian people do still not understand the issue of dual citizenship,â€ Peter Nyenabo, the Vice President for United Liberia Association in Ghana, told The Bush Chicken. He said Liberia is far behind and needs the contributions of every citizen including those in the Diaspora to help in its rebuilding process.

Nyenabo encouraged other Liberians with different views to embrace the expertise and contributions of those in the Diaspora.

Dave Weedor, UHRIâ€™s Vice President for Civil Engagements, said the initiative will attract more Liberians abroad to come back home and contribute to their nation rebuilding. As part of the citizensâ€™ initiative, Weedor said more Liberian in the Diaspora love their country and are willing to participate in every aspect of its rebirth.

Overall Organization of the Conference

He at the same time frowned at organizers of the conference for serious organizational problems during the four days exercise.

â€œI am not really surprise and Iâ€™m not in agreement with what is happening here,â€ he said.

Weedor said the conference was not well coordinated. He said there were lot of complaints from citizens on the absence of their views in the summary views submitted by the CRC for validation.

However, CRC Chairwoman Gloria Scott has described the conference as a success and praised Liberians for their supports and participation.

Scott said the results of the conference will represent the views of the Liberian people and will be submitted to the office of the president for onward submission to the legislature.

She admitted that the process was tense, which according to her indicated the seriousness of the Liberian people to make a change. Scott said the abstention of the political parties in no way undermines the results of the conference, but the committee wished that they had stayed to end what was started together.

â€œWell we wished everybody would be here, but all of us together decided to vote on headcount,â€ she said.

â€œInterestingly, some of the sectors are [boycotting], like the political parties. They may be away but their partisans are here,â€ Scott said.

During the official closing of the conference, Vice President Joseph Boakai said the day marked the finalization of another milestone in the constitutional review process that began in August 2012.

He applauded Liberians for peacefully exercising their rights without violence and intimidation. â€œThe events of the last day and the processes leading to this are all indications of our growth as a people and the maturing of our young democracy – after all, this is a new phenomenon for our country,â€ he said.

Boakai said the government of Liberia considers the constitutional review process cardinal to the governance of Liberia and to the unity of the nation.

He promised that the government will remain continuously engaged with the ongoing review process with every support to the CRC.

He also encouraged every delegate and citizen to remain engaged with the process until it is finalized through a referendum. He said that transparency will continue to characterize the process.