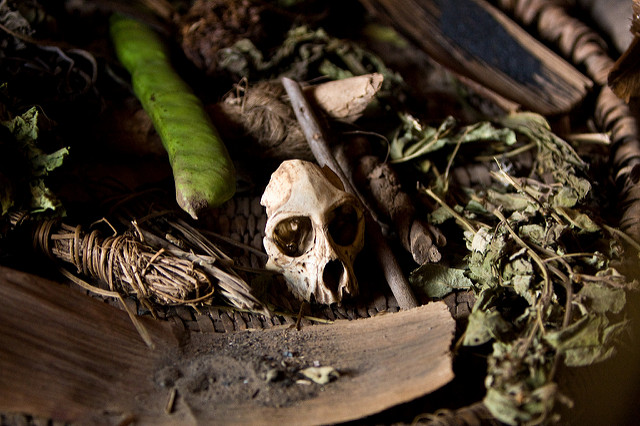 â€œMy sister I telling you O, I know what I saw with my two eyes!â€ exclaimed my taxi driver Sam.

Not wanting to appear disrespectful or dismissive as he explains what caused his motherâ€™s death, I quietly listen to him as he advises me to be careful during my time in Liberia.

â€œNothing was wrong with my ma, then from nowhere she just became sick, she was witched.â€ Sam said matter-of-factly. I asked him how he could be sure, and he explained that they took his mother to a hospital, and the doctors could find nothing wrong with her.

After trying a few different clinics, he and his family decided to take his mother to Buchanan to see a traditional healer. When they arrived at the medicine manâ€™s place, he took one look at Samâ€™s mother and said they would need to hire a spiritual healer to work in tandem with the medicine man.

Desperate and out of ideas, Sam and his family paid US$500 for the services rendered by the medicine man and the spiritual healer. Within three weeks, his mother was dead.

I remain quiet in the back seat of the small sedan as Sam reflects on the events surrounding his motherâ€™s death. He is convinced she was witched. The unexplainable rashes, the fever, the lack of diagnosis were enough to convince him that she did not die of natural causes. I offer Sam my condolences and attempt to shift the topic of conversation to something lighter.

This is not the first encounter I have had with someone in Liberia who vehemently believes witchcraft exists and has personally experienced its effects. Some of the stories I am told are literally unbelievable, but I remain silent and listen. One of the most dramatic stories of witchcraft was shared with me by a pastor who owns the guest house I stayed at briefly.

While getting to know a little about the pastor, he shared with me that he does missionary work in the interior as his passion is to bring as many people to Christ as he can and build houses of worship in underserved communities. â€œHow did you decide to get into this field?â€ I asked.

He shares with me that there are so many villages and towns, particularly in the interior, that have never been introduced to Christ. Many of them are only aware of and practicing the religion of their ancestors, which in a lot of cases is witchcraft according to him. â€œHere we go, not this witchcraft stuff again,â€ I thought.

Perhaps sensing my skepticism, Pastor Smith goes on to share with me a story about his upbringing in a rural part of Liberia. â€œMy village was very small, less than 100 people and that includes the children and elderly,â€ he said. According to the Pastor, once or twice a year his village would have a huge community party but with such a small population, theyâ€™d want outsiders to attend to make the event more enjoyable.

In the middle of the village was a large lake and about a week before the townâ€™s party, everyone in the community would gather at the shores of the lake and ask the â€œlake peopleâ€ to allow their beautiful people to attend their upcoming party. Sounds crazy to me, but I remain silent.

â€œWe would chant and call to the lake in unison asking â€˜herâ€™ to allow her beautiful people to come to our party. After we made our request we would just continue on our business as usual,â€ Pastor Smith said. â€œI wonder if he was taking a hallucinogenic or was having a very vivid dream,â€ I thought. About a week later on the day of the party, the Pastor explained, the town would fill up with beautiful people. â€œNo one in the village knew any of the people, and the visitors couldnâ€™t tell us where they were from, they just showed up, but we all knew where they were from,â€ he said. At this point, I donâ€™t know whether to laugh or cry, so I just remained stone-faced and continued to listen.

From the lake, a womanâ€™s voice could be heard yelling from the water that the townspeople should send her daughter back to her. This continued for hours. The community began to panic that the â€œlake peopleâ€ would retaliate against them for keeping their daughter from returning when in fact the young lady was scared to go homeâ€¦ to the lakeâ€¦ under the water.

Someone in the village suggested they consult a medicine man to get his advice on what they should do to return the girl to the lake and avoid any retribution from her family. The medicine man advised them to cover the female with a white sheet over her head then take her back to the lake giving her fruits and vegetables as an offering for her people. The townspeople did as they were instructed and escorted the young lady to the edge of the water. Pastor Smith says they watched this girl walk into the lake with the sheet covering her and the fruits and vegetables in her hands until she disappeared. Once she was submerged under the water, the sounds of the yelling woman immediately stopped.

I canâ€™t hold it anymore, â€œAre you certain thatâ€™s what happened Pastor? Could you have been ill or maybe under the influence of something?â€ I asked. â€œI know itâ€™s very difficult to believe but I can assure you I was there, and I saw it happen,â€ Pastor says assuredly.

Silence again. â€œStay in Liberia longer my daughter. You will hear a lot of things that will be difficult for you to believe,â€ he says to me with a reassuring smile. Having been born in the US, I cannot truly understand the influence witchcraft has on other cultures. I have however overheard my mother, raised in Maryland County, Liberia, mention on the rare occasion the secret societies who abducted and killed people for their organs because of the belief that human blood and body parts could give one power.

Since it wasnâ€™t something she discussed often and I frankly didnâ€™t want to believe such savage things were taking place from the place my mother spoke so highly of, I chose not to give it much thought. Now being in Liberia, Iâ€™m starting to wonder if all of these people are imagining this or is there something to witchcraft that Iâ€™m overlooking or unwilling to believe.

The practice of witchcraft is an ancient belief and certainly not only native to or only exercised in Liberia. Widely believed and perhaps practiced across Africa and other parts of the world, several high-profile cases have been reported on the issue. One notable case was reported on recently in Nigeria in which a Danish aid worker rescued a two-year-old boy who had been abandoned by his family and accused of being a witch.

In some parts of Liberia and Sierra Leone where Ebola left the highest death tolls, some Ebola survivors have been stigmatized and accused of witchcraft by merely surviving the life-threatening disease. Similar stories of â€˜witch accusationsâ€™ can be found occurring in various regions of the continent, but what is being done to help influence change and encourage the abandoning of some of these primitive and potentially deadly practices?

In December of 2015, the United Nations Mission in Liberia released a detailed report which documented the harmful effects that certain traditional practices can have on society.

The importance of educating people on the dangers some of these rituals and beliefs can have on communities is vital to influencing change. Organizations like Safe Child Africa based in Manchester, England have made it a part of their mission to provide assistance for children who have been accused of witchcraft. â€œWhy are those menâ€™s faces white?â€ I ask my driver Hafez as we head up the highway through Margibi County.

â€œThey Society men, the secret society. They can be in the bush doing ritual,â€ he says. I silently thinkÂ this isnâ€™t very secretive if they are walking along the highway in white face, but OK.

About 30 minutes later, we approach a checkpoint and prepare for the standard intimidation and shakedown by the police. As we sit and wait in the car to approach the roadblock, I am reminded of a story my Godmotherâ€™s nephew shared with me, about witchcraft of course.

â€œHafez, stop it please,â€ I tell him in utter disbelief.

â€œIâ€™m telling you, myself went there; itâ€™s true. I lived in that place for three months, I cannot lie on what I sawâ€ he says sharply. I donâ€™t reply and quietly wait to hear this encounter of witchcraft power in Liberia.

According to Hafez, there is a very small town in the interior of the country near the city of Bopulu that has a very strange tradition. Once a visitor approaches the boundary of the town, they must turn around backward to walk into the village. â€œRight,â€ I murmur. Iâ€™ll humor him and ask, â€œWhat happens if you walk forward into the town Hafez,â€ I ask dryly. â€œYou cannot, itâ€™s not possible,â€ he states. With my face visibly doubtful, I ask him if heâ€™s ever tried it, and he says of course. When I ask him what happened when he tried to walk in the town forwards, he says his body would not move. Then I ask if this â€œruleâ€ applies for cars too and he says yes, you must enter the town backward otherwise you will not move.

â€œWhat do you think is preventing people from being able to walk into the town going forward,â€ I ask knowing the answer. â€œWitchcraft of course,â€ is his reply.

The police approach the car and ask us what we have in the trunk and where weâ€™re going. The driver implores with the officer that we have no money to offer him and are just going to Buchanan for a short trip. After a bit more negotiating with the authorities, we are released and allowed to continue on our journey.

After spending nearly a month in Liberia I canâ€™t say that I completely believe all of the stories I was told about witchcraft, but its influence on society is unquestionable, whether good or bad.