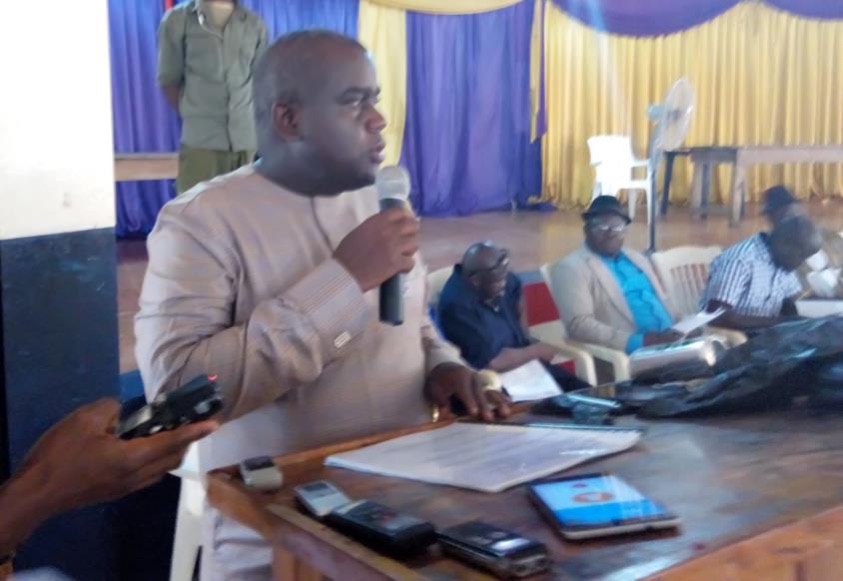 He did so on Sunday, January 13, 2019, at the Unification Pavilion in Buchanan.

Joe, who chairs the Houseâ€™s Committee on Public Works and Rural Development, said his committee held two separate meetings and public hearings on the malfunctioning of traffic lights in and around Monrovia and another on the payment of road fund taxes by petroleum importers.

He said the Ministry of Public Works is now in the process of procuring new traffic lights with a team of Chinese engineers to install those lights.

Speaking on the road fund tax, Joe said his committee had resolved the legal bickering among petroleum importers who had earlier refused to pay the US$0.30 per gallon imposed by the government. The funds collected from the tax would go into a restricted fund for road maintenance.

Joe also noted that, of the 106 sittings (including 57 regular sittings, 6 special sittings, and 43 executive sittings) held by the legislature from January 15 to September 15, 2018, he did not attend three sessions. He attributed his absence to engagements in the county, including the Grand Bassa Trade and Investment Conference, the first cabinet retreat held in Buchanan, and his presence at the third graduation ceremony of the Grand Bassa Community College.

During the period under review, Joe named some of the key bills passed by the legislature as the Kamara Abdullah Kamara Act of Press Freedom, the Business Corporation Act, Cote dâ€™Ivoire, Liberia, Sierra Leone, and Guinea Interconnection Project loan, the Land Rights Act, and the Local Government Act.

â€œThe Local Government Act is about decentralizing the administrative, fiscal and political power from the national government to local government. This new act replaces the Local Act of 1972,â€ he said.

The Grand Bassa representative also noted that he had aided residents of the district in the areas of health, education, infrastructure, and transportation.

â€œHealth-wise, our records show that we have spent over L$90,000 [US$570] from January to December 27, 2018, to assist citizens who cannot afford medical bills,â€ he said. â€œCases received both from Monrovia and district offices have ranged from minor sicknesses like malaria, fever, diarrhea, and diabetes.â€

Joe added that he has 61 students on scholarship at the Grand Bassa Community College who are pursuing different disciplines. Moreover, he said the education committee is in the process of recruiting an additional 30 students to attend elementary, junior, and senior high schools in Buchanan. He put the total cost of the scholarship scheme at US$3,200.

In addition to the scholarship program and financial aid, Joe named other areas in which he was working within the education sector: â€œI am currently in the process of establishing a vocational school in our district for our citizens and residents who have the ambition to learn technical skills.â€

Making reference to transportation, Joe said he had purchased a US$85,000 34-seater bus to provide transportation for students in Buchanan. He said fueling the bus cost him L$110,000 (US$692) monthly.

On infrastructure, he said, the 1.5 km Fairground road currently being constructed was a promise he made that is nearing completion. The road is being built by the Ministry of Public Works based on Joeâ€™s request.

Joeâ€™s first legislative annual report was accepted by the residents based on the fulfillment of some of the lawmaker promises made during the campaign. He said his last campaign promise to provide L$3 million (US$18,868) is already in process and soon to be delivered to the marketers of the district.

When the loan is provided, it will mean that he has completed his three campaign promises. During the 2017 campaign, Joe had vowed to provide L$3 million for the loan, to fix the Fairground road, and to establish the District Development Council. He has already established the District Development Council and the Fairground road is under construction.