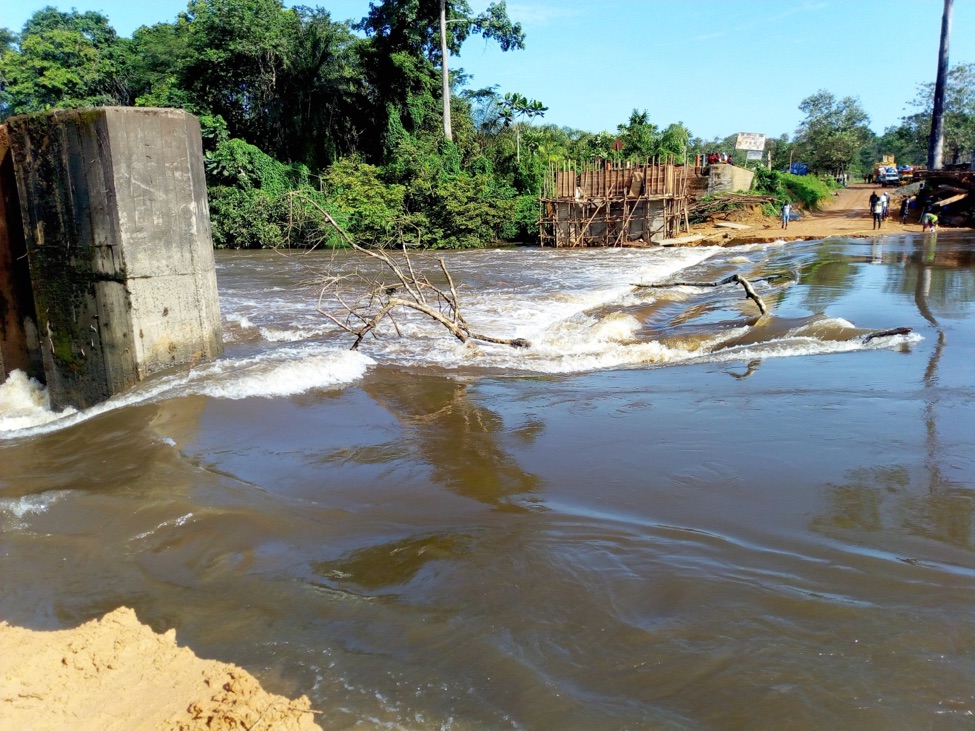 YARPLEAH TOWN, River Cess â€“ The detour bridge meant to be used as an alternative route to cross the Timbo River washed away on Saturday night as a result of heavy rains, cutting off a major connection to the southeast.

The development comes as the old Timbo River Bridge has been demolished to make room for the installation of a new bridge.

The construction of the detour was completed on Tuesday, April 23, 2019, and Napoleon Davis, the supervisor of Jupiter Construction, guaranteed that the detour could withstand the force of the Timbo River. Davis maintained his guarantee even though the detour appeared to not be high enough above the level of the river.

â€œWe understand that the river gets powerful in the month of June,â€ he said. â€œThat is why we are doing everything we can to make sure that demolition is done before that time.â€

On Sunday morning, after the detour had washed away, Davis told The Bush Chicken that his company could do nothing about the situation but to call on authorities to provide a motorized boat to help ease the burden of the many commuters who were now stranded across the river.

Some residents of the area had started using local canoes to cross people before they were stopped by members of the Community Watch Forum and the Liberia National Police. 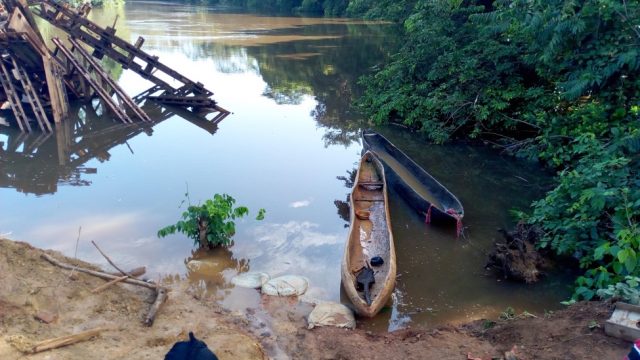 Since the incident, citizens have been voicing their anger about the situation, pointing out that it could exacerbate the worsening economic climate by driving an increase in the price of basic commodities due to the increase in transportation fares.

George Trokon, the head of civil society organizations in River Cess, blames Jupiter Construction for delaying the work until the beginning of the rainy season.

â€œThey waited for the entire dry season to finish before they want to fix [the] bridge,â€ Trokon said. â€œThis is just to bring untold suffering on our people.â€

Travelers from Monrovia and other parts of the country aiming to get to the southeastern counties will now have to use the route through Nimba and Grand Gedeh.

River Cessâ€™ assistant superintendent, Amos Somah, said the Timbo River situation is now a national emergency that needs the national governmentâ€™s attention. At the county level, he said he had already started negotiating with the Ghanaian fishing community for a motorized canoe to be used as an alternative â€œwhile government intervenes.â€

â€œAs I speak to you I am at the crossing point negotiating for a machine canoe that we will be using yet,â€ Somah said. â€œI have informed the public works minister and other key stakeholders about the situation.â€

The project to replace the Timbo River Bridge was approved under former president Ellen Johnson Sirleaf; however, work was delayed due to the 2017 general elections. Work began in April 2018 and was expected to have been completed in three months. However, Jupiter Construction noted that heavy rains caused them to suspend their work. In May and June of 2018, the company conditioned three piers beneath the bridge before the work was suspended in August.