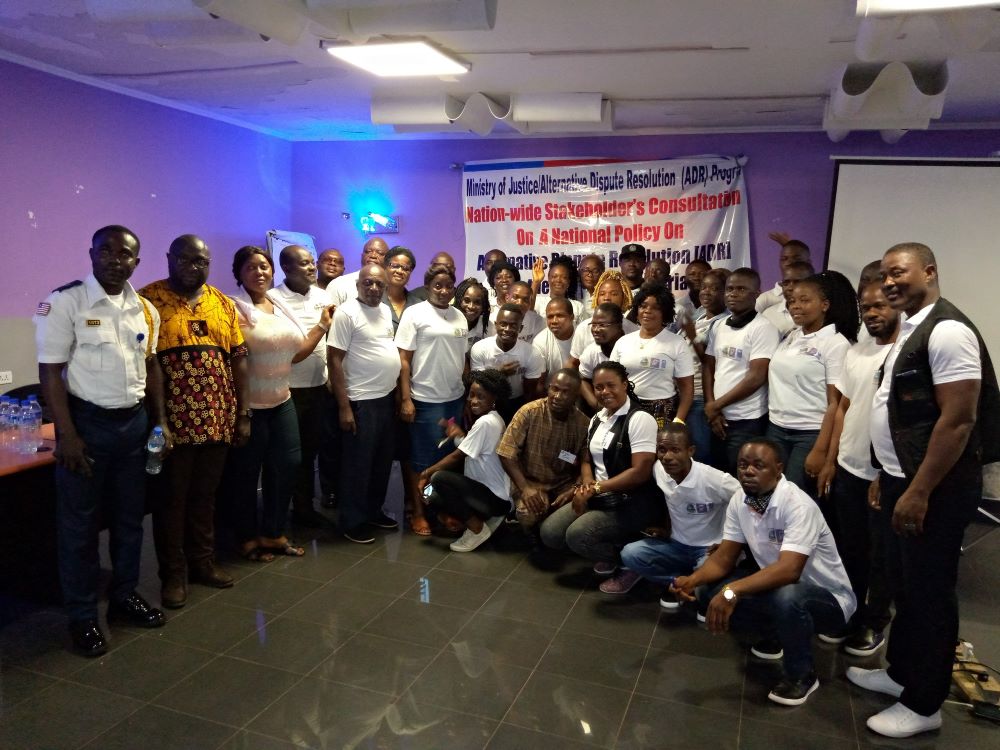 BUCHANAN, Grand Bassa – The Ministry of Justice has concluded a regional consultative meeting with its partners to construct a draft policy aiming to formalize alternative dispute resolutions across the country.

The two-day gathering in Buchanan was supported by UNDP and the Carter Center and aimed to come up with a framework over how the ministry and its partners can allow citizens to speedily and affordably access justice outside of the court system.

Participants were drawn from three counties including River Cess, Grand Bassa, and Sinoe. Two previous meetings had brought together participants from Grand Cape Mount, Gbarpolu, and Bomi in Tubmanburg, and those from Nimba, Lofa, Margibi, and Bong in Gbarnga. A final consultation is later expected to solicit the views of people from southeastern counties such as Grand Gedeh, Maryland, Grand Kru, and River Gee.

Speaking at the Buchanan program, assistant justice minister for administration, Edrick Noah, said the Alternative Dispute Resolution program supports the government’s Pro-Poor Agenda for Prosperity and Development, which has a pillar that promotes sustaining peace, security, and the rule of law.

“The goals of the ADR Program are to improve access to justice for all, help reduce courts’ dockets and case backlogs, reduce pretrial detentions, and institute ADR as a key component of Liberia’s justice system,” he said.

Noah noted that citizens’ participation in developing the framework was essential to ensure that it is acceptable and realistic.

“Our immediate past historical records have informed us that the lack of citizens’ participation in decision-making processes, inadequate or no access to justice were some of the causative factors that led to the Liberian civil conflict,” Noah added.

“The ADR policy, when adopted, will go a long way in mitigating critical issues that helped overwhelmed our justice system.”

Meanwhile, the director of the ADR program at the Ministry of Justice, Gobah A. Anderson, said the consultation was intended to get the views, recommendations, and suggestions of the citizens into the ADR draft policy document.

“We are trying to see how we can formalize and institutionalize the process of dispute resolution to set the jurisdiction to look at the kind of cases that can be brought before ADR, to have a policy and to obviously have an ADR law,” Anderson noted. “The chiefs and elders have been doing their best, but there is a need to formalize it.”

He added that the policy would take into account a range of cases that could come before ADR: “The citizens will suggest to us what kind of cases they want to see come before ADR or can be handled by ADR, but obviously, felonious cases, major criminal cases, and cases of rapes will not be brought before ADR – but sort of minor and civil cases.”

A team of lawyers from the Ministry of Justice, the Liberia National Bar Association, and the Carter Center presented the draft ADR policy to the participants during the meeting. Participants then asked questions and made recommendations to the policy.

After all the regional consultation meetings are completed, the Justice Ministry and its partners plan to host a national validation conference in Monrovia in early November.