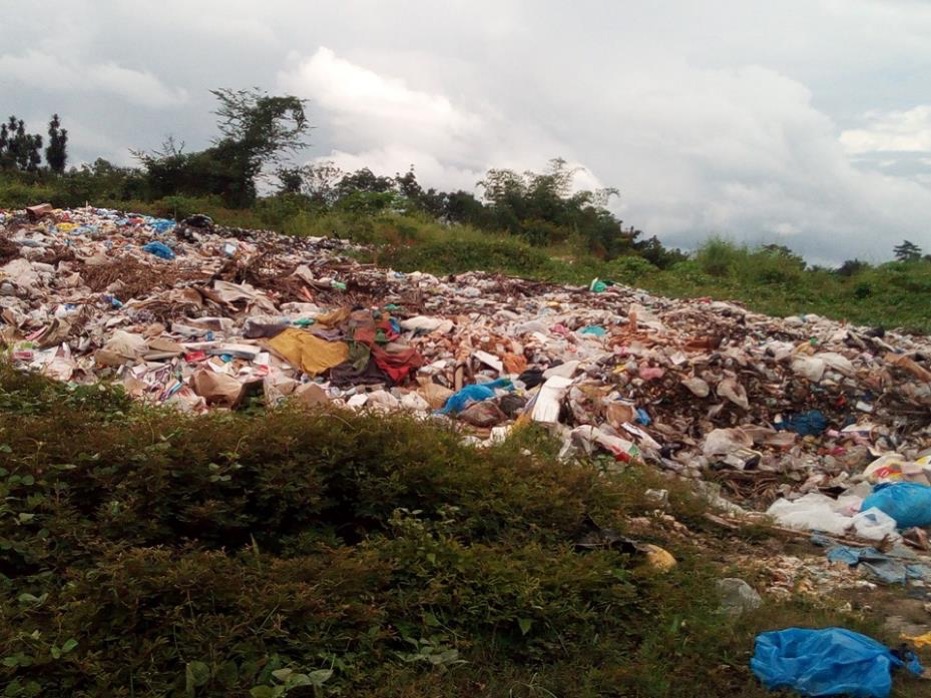 KAKATA, Margibi â€“ Local officials and residents of Kakata are accusing NC Sanitors and Services, a waste management company, of illegally dumping medical waste in a community in Kakata. They say it has been happening for three years now.

Large yellow trucks operating without license plates with the companyâ€™s branding have been regularly dumping waste overnight at an open garbage site along the Bong Mines Road. Afterward, the site is usually set on fire.

The garbage dumped at the site includes medical waste collected from the John F. Kennedy Memorial Medical Center and the Hope for Women clinic. Both medical facilities are located in Monrovia and Paynesville, respectively.

Close scrutiny of the site shows that the debris is in a swamp that connects to a stream that runs down to nearby villages.

Locals have long complained that the dumping of potentially hazardous materials near their communities poses health risks. Already, they complain about an increase in flies, rats, and cockroaches and say the company has done nothing to minimize the influx of insects. Moreover, they say their complaints have not been addressed by local authorities.

Kolleh Golay, a casual laborer at a private farm who recently moved to the area, said since he moved to the community two months ago, he has noticed a surplus of vermin.

â€œEspecially when you are cooking, the flies are all over the place, sitting on the food. You have to be driving the flies away from the food every moment,â€ Golay said.

He said some community members have reported seeing clothes with blood stains and other dangerous items at the garbage site.

Watta Lackey, a mother of seven children, worries about the impact of the site on her childrenâ€™s health.

â€œEven we are eating, we have to go indoors because the flies [are] too many,â€ Lackey said. â€œEven strangers who come here donâ€™t eat and drink even water from us.â€

Another resident of the community, Johnson Taylor attests that the waste often dumped at the site contains medical instruments, clothes, and shoes of accident victims, and other dangerous substances.

He said over the three years the company has been dumping hazardous waste at the site, residents have repeatedly advocated to their leaders for the practice to stop. However, he said nothing has happened.

Kakataâ€™s Mayor Emmanuel Goll told The Bush Chicken that he has asked the waste management company to disclose the nature of the waste dumped at the site, but the company has been defiant.

Goll said after he ordered police to impound a truck on one occasion, he received a series of calls from senior government officials asking the police to release the vehicle. The mayor says this makes it difficult for him to make the company accountable for its actions.

According to the general town chief of Wymaquelleh Clan, Alfred Cooper, NC Sanitors have avoided any action by authorities because they have contended that the dumpsite is on private property. But Cooper says, even if the site is privately owned, it is still affecting hundreds of people in the nearby community.

â€œThey must listen to us because negotiating with the property owner privately â€“ itâ€™s not he alone living in the community,â€ Cooper said.

NC Sanitorsâ€™ chief executive officer, James Strother, confirmed that his company dumps at the site, but declined to state the type of waste being carried there. He has declined to provide further details on the issue.