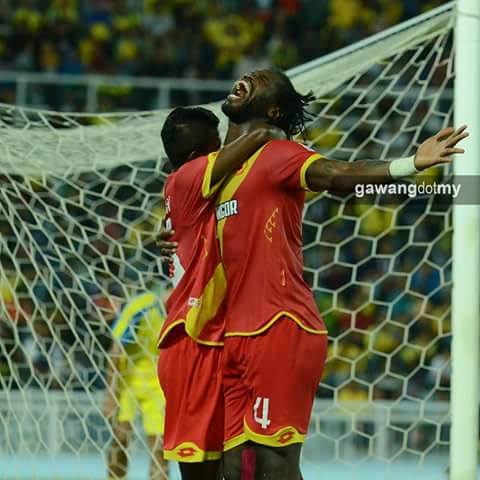 Liberian internationals Patrick Ronaldinho Wleh, Zah Krangar, and Francis Forkey Doe, may not play their professional football in Europe’s top leagues, but the trio continuies to enjoy their successful start to the new Malaysian football season with excellent performances in their respective clubs.

Following a 2-2 draw away at Ceres in the Asian Football Confederation Cup midweek, Wleh’s Selangor returned to winning ways with a dramatic 3-1 victory away at Pahang in round three of the 2016 Malaysia Super League.

A brace from Wleh and a goal from Gopinathan Ramachandra were enough to see Selangor get all three points away from home.

Playing at home, Pahang took the lead in the 13th minute through Halim Faisal. However, they failed to prevent Selangor from getting a first-half goal when they let Wleh slip through. He collected the ball from outside the penalty box and made his way through, beating three defenders before shooting in the bottom left corner. Wleh doubled Selangor lead just in the stoppage minutes of the first half when he scored from Andik Vermansyah’s cross.

Back from the break, Pahang pressured for the equaliser, but its hopes were gone after Gopinathan Ramachandra made it three for Selangor in the 67th minute.

The club side of Krangar and Doe, Felda United maintained its undefeated form this season with a 2-0 win over T-Team.

A support from Muhammad Hadin bin Azman was enough for Felda to snatch all three points at home.

With three wins from three league matches, Felda sits on top of the Malaysia Super League table with nine points.

Striker Edward Junior Wilson netted his first league goal in the Malaysian Premier League as his club; Perlis got a disappointing 1-1 draw away at Sime Darby.

Wilson gave his side the lead in the 22nd minute, the lead that lasted until the 86th minute when Sime Darby leveled the score to get a point each.

The point earned away at Sime Darby gave Perlis four points from three matches and are now seated 9th on the Premier League table.

In South Africa, Anthony Laffor’s Mamelodi Sundowns progressed to the second round of the 2016 Confederation of African Football Champions League after a 2-0 win over Zimbabwe league giant, Chicken Inn.

A first-half goal from Wayne Arendse and stoppage time penalty from Katlego
Mashego were enough to help Sundowns secure a win in the first leg.

Laffor was introduced in the 36th minute for Tebogo Langerman, who sustained an injury.

Kpah Sherman was out of the Santos team that managed a scoreless draw at home to Mbombela United.

The former Young African Sports Club striker was shown a red card in Santos’ last week 1-1 draw away at Amazulu.

In Cyprus Theo Weeks played 83 minutes as his club Ermis suffered their 13th league defeat of the season after a 2-0 away at Paphos.

Theo made his 18th league appearance as Ermis dropped to 11th on a 14-team league table with 24 points from 25 games.

Still with the Cypriot first division, Solomon Grimes made his 20th league appearance as Nea Salamis came back from their last week defeat with a 0-0 draw at home against Doxa.

Salamis maintain its sixth spot on the league table with 32 points from 25 games.

Ahli moved up to second on the league table with 27 points, two points behind league leaders Al Wihdat.

In Sweden, Dioh Williams was absent from Gefle IF squad that won their first three points in the Swedish Cup following a 4-2 win over Brommapojkarna at the Gavlevallen. From two games, Gefle has just a win and is seated second in Group Seven while compatriot, Sam Johnson tasted his first defeat in competition after his club, Djurgardens lost 1-0 away at Syrianska FC.

Keith failed to add to his six league goals for his Myanmar national league side Yadarnabon that got a narrow 1-0 win away at Shan United.

Yadarnabon remains on top of the Myanmar National league with 20 points from eight games.

Spanish based William Jebor continues to search for his first league goal as his club; Ponferadinha has been performing poorly.

After last weekend 3-1 home defeat to Cordoba, Ponferadinha were again on the losing side after they fell to 4-2 to Atlectic Bilbao II.

Ponferadinha stayed in the 16th position of the Spanish Segunda with 28 points from 27 games.

Tonia Tisdell remains bottom of Turkish Lig 1 with his club, Karsiyaka, which has lost its last three games. Tisdell joined Karsiyaka on loan in the 2016 winter transfer from Turkish Super Lig side OsmanlÄ±spor. He has made four league appearances since his arrival at the club.

There was no goal in the Greece Football League (second tier) for striker Herron Berrian whose club, Panserraikos sneaked away with three points away from Kallithea following a narrow 3-2 win.

The former Platanias striker was introduced into the match in the 75th minute when he came in for Argiris Barettas.

Panserraikos’ three points took them to 9th position on the league table with 28 points.