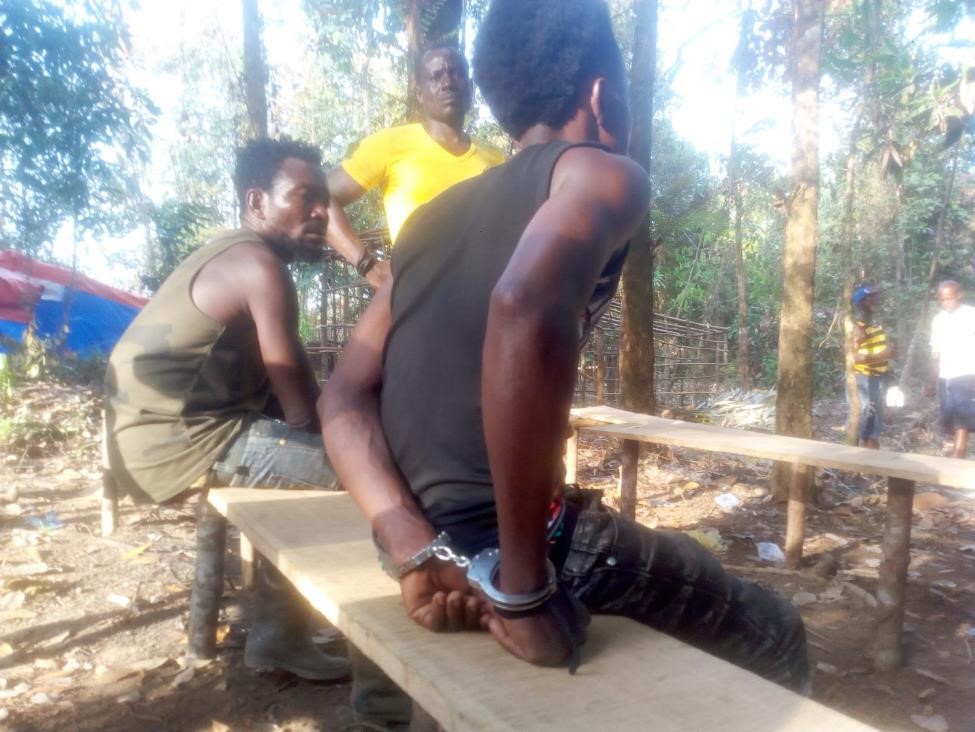 I.T.I., River Cess – On February 7 at 11:30 am, the lifeless body of 34-year-old Morris Bukon was discovered on the Cestos River in an old concession area owned by the International Timber Industry, one of River Cess’ largest mining communities. Bukon’s neck was broken, one eye gouged out, and left ear cut off.

Bukon and three men—Steven Nelson, 20, Obediah Reeves, 22 and Solomon Toe, 20—had gone fishing early that Friday morning on the Cestos River when a mob pursued them, accusing them of attempting to steal parts from dredging machines parked on the river banks, according to court filings. One miner, a well-known Ghanaian miner named Tete Deaduba, alias Beirbeir, has been indicted for Bukon’s murder.

Built in remote places with no presence of county authorities and law enforcement officers and plagued by crimes, including prostitution, and illegal drug smuggling, many artisanal mines in River Cess run quasi governments to maintain law and order. They often punish violators who break their laws harshly. There have been incidents of rape, torture, and mob violence. The death of Bukon sheds light on crimes at the mines, which are located in one of the remotest places in Liberia.

“Human Rights abuses at various mines in this county have been like that for years now, but the local administration, including the police, have just failed to do anything about it,” says George Trokon, a leading civil society actor in the county. “Those arrested should be tried and if guilty, they should be sentenced. This will serve as a deterrence for others.”

There are 54 active class “C” mining licenses in River Cess as of May 24, the fifth most in the country.

The Minerals and Mining Law of 2000 mandates the Mines Ministry to inspect mines at “anytime after reasonable notice.” However, the ministry has faced logistical and personnel challenges for decades to carry out its duties. It lacks equipment such as GPS devices, tents, and compasses. Sixty-five percent of its inspectors are volunteers, and it has no funds for fieldwork.

The Yarnee Mining Agency, which controls the area where Bukon was murdered, only responds to crimes that are directly related to mining such as a miner trespassing another miner’s claims, not murder and mob violence, according to Weah Toe, the mining agent assigned there.

Morris Camp, owned by one Morris Konneh, is an illegal gold mine. There is no trace of the license he claims he holds in the Ministry of Mines and Energy’s online repository. In fact, there are no active licenses in the entire Timbo River district in which this mine operates. Out of the 54 active artisanal mining licenses in River Cess, 6 are in Sam Gbarlor, where Bukon was murdered.

The police in River Cess also face logistical challenges enforcing the law. The only police pickup truck in the county has been down and parked at the Yarpah Town Police Station since June 2019.  Police officers in the county usually use commercial motorbikes to visit crime scenes.

“There are hard-core criminals in these camps so you don’t just go there when you are not prepared logistically,” says Fasu Sheriff, the commander of the police force in River Cess. “You don’t expect us to go in these camps on foot – not possible.” 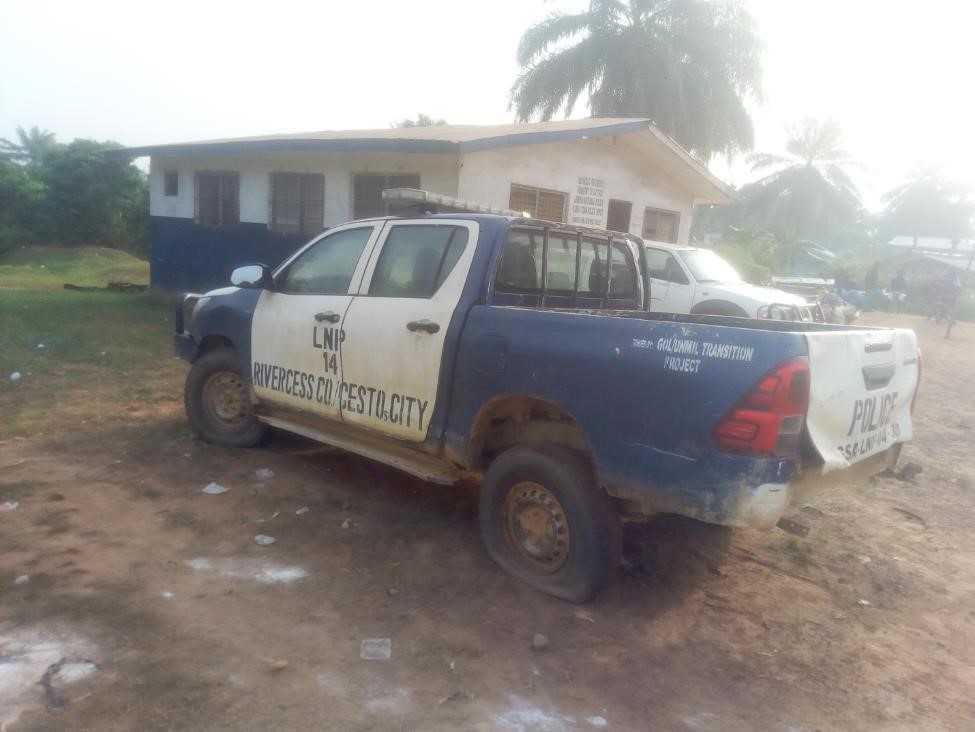 Two weeks before the death of Bukon, miners in Morris Camp, a gold mine in the Timbo district, ordered a 30-year-old woman stripped naked and a mob attempted to kill her, according to the survivor and eyewitnesses. For fear of stigma, The Bush Chicken agreed to conceal her real name. She was accused of stealing L$5,000 (US$25.25) from another woman. She was only saved after her relatives and friends threatened to point out all those who were going to take part in her murder, eyewitnesses say.

“They naked me and put their hands in my panties and the camp master did not do anything about it,” she explained her ordeal to The Bush Chicken. “One man who says he is a community police [officer] said they should carry me down the camp to kill me.” 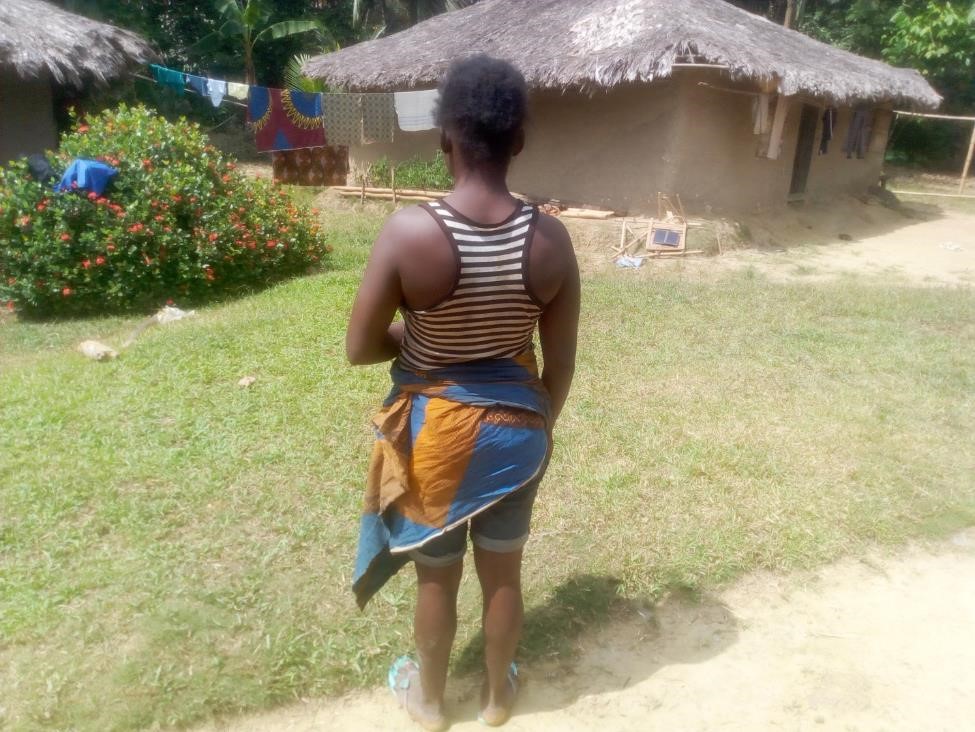 A woman who was abused by a mob after being accused of theft stands before her home, days following her abuse. Photo: Eric Opa Doue

Emmanuel Vorgar, the camp master at Morris Camp, refuted claims the woman was ordered to be killed. He also denies involvement in her abuse.

“I was here when I saw the group of people bringing [the victim] to me and by that time they [were] finished charging and taking the money from her,” Vorgar claims. “Yes, I know they put hands in her underclothes when they were looking for the money but I was not the one who gave the order. I didn’t hear anyone talking about killing her, that’s a lie.”

But another person was being detained even as Vongar spoke to The Bush Chicken. Charles Gbotoe was accused of stealing a flash drive.

“This is how we are treated here every day,” Gbotoe cried out, grimacing, resigned to his fate. “Even if someone lies on you, there are no investigations. All they do, they either tie you or handcuff you, and you will remain in that pain until [Vorgar] is satisfied.”

This time Vorgar claims responsibility for Gbotoe’s detention. “This is [a] gold camp and you have… disgruntled people here, so when any of them misbehave, I got all rights as camp master to put them under control,” he tells The Bush Chicken. He says the handcuff he uses to detain Gbotoe and another one he has were given to him by the police, a claim Sheriff denies.

Murphy Bloh, the commissioner of the Fen River district, where Vorgar’s gold mine is located, also claims that the police are aware. Again, Sheriff, the local police chief, denies Bloh’s assertion.

But River Cess’ Superintendent Bismark Karbiah says he is aware of crimes on mines across the south central county. The office of the superintendent recently ordered mines in the county closed, but a limited number of security forces in the county, coupled with meager or no logistics, is hindering enforcement, Karbiah said in a phone interview.

“The different news of abuses and deaths from these mines has the propensity to scare away investors who may have interests to invest in the county,” Karbiah added. “What we are going to do is work with the county attorney to make sure that all those cases are prosecuted and those found guilty be dealt with according to law.”

Gbotoe and the unnamed woman who was abused did not file complaints over their alleged mistreatments, but Karbiah can see what happens in the late Bukon’s case. The deceased has been buried. Suspect Deaduba and the three men with Bukon on the night he was killed have been charged with criminal conspiracy to commit murder. They are awaiting trial.

This story was a collaboration with New Narratives as part of the Excellence in Extractives Reporting Project. German Development Cooperation provided funding. The Funder had no say in the story’s content.