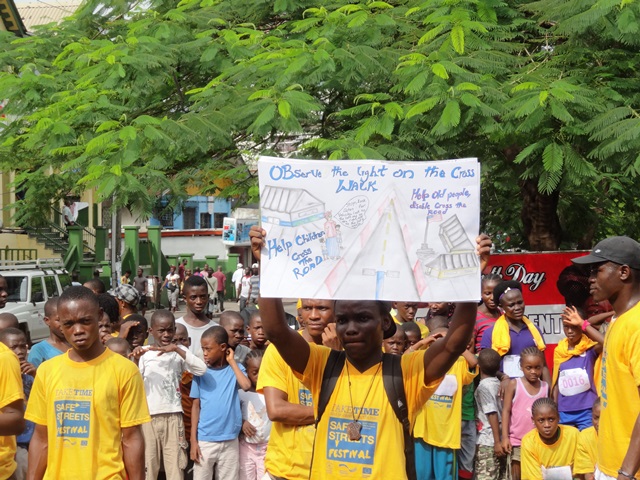 The event takes place under the theme: â€œRoad Safety Strengthens Economy.â€ The Safe Streets Festival is intended to raise awareness on road safety to highlight the idea of safe car-free streets that allow only non-motorized transportation â€“ pedestrians and cyclists â€“ on the street so that citizens can feel free to walk around, participate in a wide range of leisure activities, and play with children without the risk of being run over. The event is open to the public and free.

The one-day fun-packed event will begin with a six-kilometer run from the John F. Kennedy Memorial Medical Center to the event site at the junction of Broad and Mechlin Streets. The event will feature a parade with road safety stakeholders, cultural and entertainment activities, as well as stands with Road Safety Education and play areas for children on Broad Street.

The Market Fair of Made-in-Liberia products, between Randall and Ashmun Streets, will display and sell locally made arts and crafts, fashion, beauty, food products, and much more, all supporting Liberian small and medium enterprises. The event will run from 8:00 a.m. to 8:00 p.m., followed by the official opening led by Honourable Patrick T. Sudue, inspector general of the police.

Annually, Liberia loses up to seven percent of its GDP to inadequate road safety measures and high levels of traffic-related deaths and injuries. According to the World Health Organization Global Status Report on Road Safety in 2018, at least 35.9 deaths were recorded per 100,000 population. This places Liberia at the first place in the global ranking of Road Traffic Deaths and Proportion of Road Users by Country. According to the Liberia National Policeâ€™s statistics, at least one person dies a day and six persons sustain injuries on Liberian roads. Around 100 cases of traffic collisions are reported daily. Participants of the Safe Streets Festival will learn about the safer use of roads in Liberia.

The Liberia National Police wishes to inform the public that because of the event, Broad Street will be closed to regular traffic on Saturday, December 7 from 1:00 a.m. to 8:00 p.m. Absolutely no vehicle will be allowed to pass between Gurley and Robert Streets all day. The Liberia National Police regrets any inconvenience this closure may cause you; the public is advised to take due note of this announcement and act accordingly.