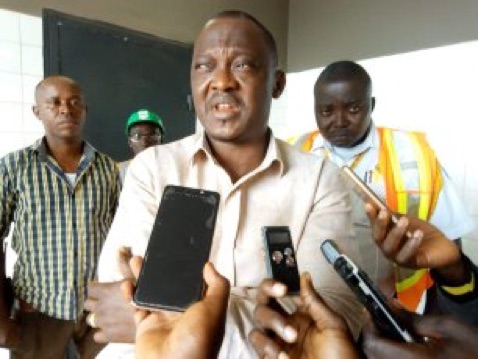 BUCHANAN, Grand Bassa â€“ The private security firm SEGAL has announced a plan to lay off 180 security guards assigned in the concession areas of ArcelorMittal in Nimba, Bong, and Grand Bassa.

For more than five years, SEGAL held a contract with ArcelorMittal to provide security service to the companyâ€™s operational areas.

SEGALâ€™s CEO Momo Cyrus made the disclosure to reporters in Buchanan on Monday, where he noted that 69 of the 180 security guards would come directly from ArcelorMittalâ€™s operational area in Grand Bassa. The rest will come from Bong and Nimba Counties.

He said the existing contract between his company and the world steel giant allows ArcelorMittal to request for reduction of manpower based on the availability of assignments.

â€œWhat had happened is that there are some assignments that became not important to their operations anymore, so they have to relinquish that assignment until we have an assignment,â€ he said.

Cyrus, however, did not provide the specific time when the redundancy will take place, but he said those affected could be recalled if new opportunities arise.

â€œThe client provides deployment chart regarding the number of men that they need. If at some point in time those posts that were created are no more important to the operations, of course, we have to cut down,â€ he added.

He also told reporters that his firm would not provide extra benefits to security personnel who will be affected by the redundancy, noting that it is provided in the contracts of all those recruited that they would be downsized anytime when there are no assignments available for them.

â€œThe way we work is that if there is no deployment, you canâ€™t get paid,â€ Cyrus said. â€œThe truth of the matter is, when you are with any institution, it is good to make yourself an asset. We are not saying the guys who have been downsized are bad people, but we look at the best, better, and good. So, we getting the best and better.â€

He expressed regret over the downsizing, especially at the time when the economy is not doing so well.

â€œThe kind of business that I run is that the more men I deploy, the more money I make. I am losing close to US$50,000 income every month. That is huge money for my company. So, I am sad about it,â€ he explained.

â€œI am also sad about the fact that people will be dropped, and the economic situation that they may not have money at the end of the month. It bleeds my heart, but what can we do?â€

Cyrus encouraged those who would be affected by the decision to remain calm and peaceful, as they might only be rehired only based on their past records with the company.