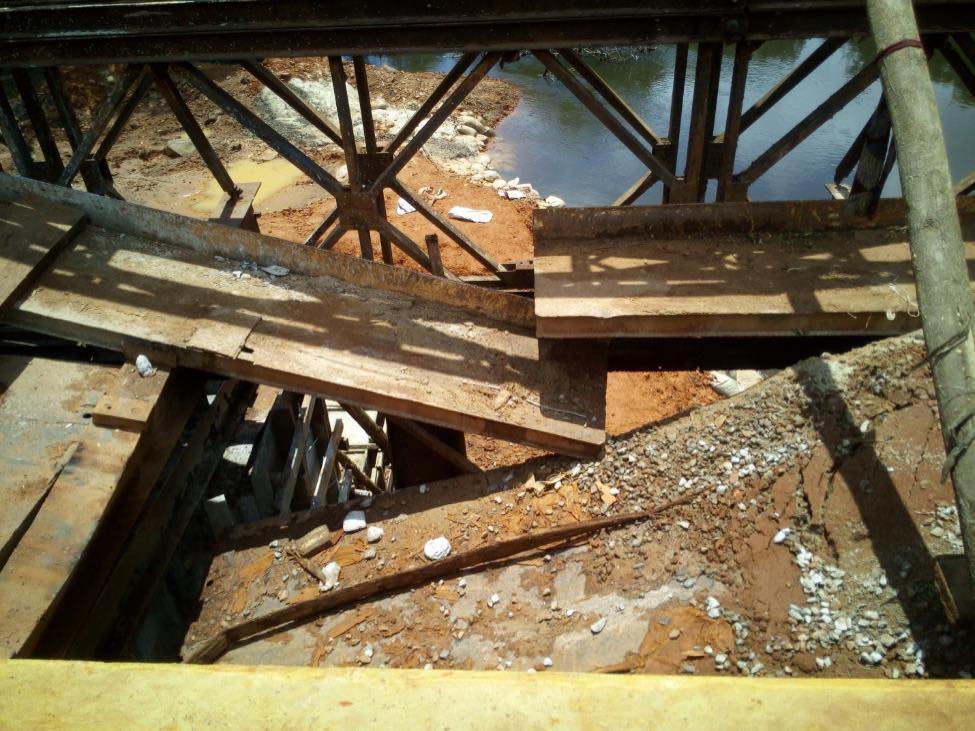 YARPAH TOWN, River Cess­­­­­­ – At 12:06 a.m. Wednesday morning, the Timbo River Bridge that separates Grand Bassa and River Cess again became so badly damaged that it was again rendered too dangerous to cross.

This is exactly three weeks after an announcement by Napoleon Davis, the site supervisor of Jupiter Construction, that construction at the bridge had been suspended until October this year.

Davis told a River Cess local Radio Station that the Community Watch Forum and the Liberia National Police would have regulated the movement of vehicles on the bridge, but this has not effectively regulated traffic on the bridge.

River Cess’ Chief of Traffic Amos Tokpaqueh is currently out of the county and members of the Community Watch Forum said the drivers failed to listen to them in the absence of uniformed police.

“We don’t have uniforms so when no police here, they can’t listen to us,” said Joseph Yarpleah, one of the community police told the Bush Chicken. “Last night we told the driver to offload the plank truck before crossing but he failed to listen.”

Due to the weight of the truck, which was carrying more than 500 pieces of planks, one of the beams beneath the bridge close to the Grand Bassa side broke and steel plates on the floor fell into the river, leaving an opening of seven feet, with no passage for even pedestrians. There were no deaths or injuries.

Before dawn, some commercial drivers had covered the area with several pieces of planks to allow their vehicles to cross.

Even though the bridge is in a fragile and dangerous state, given that it has not yet been repaired, authorities have been allowing vehicles to go across. However, drivers of vehicles that are heavily loaded are asked to unload their vehicles before driving across.

County Inspector Daniel Tokoe Doe, who is the highest ranking local official in the county, earlier said that no vehicle had been allowed to cross the bridge. He later changed his statement and acknowledged that “though it is risky to allow vehicles to use the bridge, we have to allow them to cross because we can’t keep the people here the whole day.” In June 2017, the bridge became so badly damaged that local authorities at the time declared it unusable. The bridge was repaired by the Ministry of Public Works in collaboration with one of the logging companies in the county. Even though the current condition of the bridge is now worse than it was in 2017, local authorities are continuing to allow vehicles to use it under this condition.

Back in 2017, when the bridge was ordered closed to vehicle traffic, some local officials were accused of receiving bribes to allow cars to cross overnight.

Davis, the site supervisor, told The Bush Chicken via phone that his team of engineers was coming from Monrovia to conduct a temporary repair on the bridge.

During the voter registration exercise of 2011, the bridge became damaged and one person died while several were wounded. Two years later, the bridge collapsed again, leaving no casualties this time.

The Timbo River serves as a boundary between River Cess and Grand Bassa.