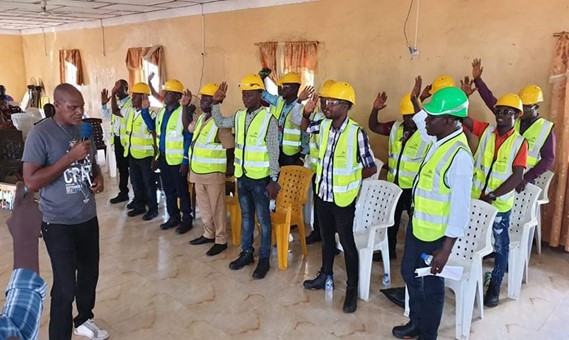 BUCHANAN, Grand Bassa – Workers at ArcelorMittal Liberia have inducted a new crop of leaders to advocate for their rights over the next two years.

Chea Romeo Brooks was elected as chair of United Workers Union of Liberia Local Four while Eric Freeman was elected co-chair, Melvin Lahia Sandie as secretary-general, and Joseph Boyah as grievance officer, among a few other officers. Although the induction ceremony took place on January 31, the officers were elected on December 29, 2020 by their colleagues.

Serving as witnesses were Dominic Wreh, the assistant director for Trade Union Affairs at the Ministry of Labor; Theresa T. Vaskinda, president of the Liberia Labor Congress; Secretary-General Dave J. Seneh of United Workers Union of Liberia; UWUL’s training and research director, Vacus W. Kun; and Edwin B. Cisco, the secretary-general of the overarching trade union in Liberia, the Agricultural, Argo-processing, and Industrial Workers Union of Liberia.

Assistant Director Wreh installed the new leaders into office and urged them to remain united in their quest to improve the working conditions and the well-being of the workers. He challenged them to push for better results than they have gotten in the past.

“If you, the workers, are not united, you can get whatsoever leadership [and] they will not succeed, but if you the workers are united, you will be able to push them to do the right thing so you can benefit,” he said.

Seneh, the UWUL secretary-general, made a similar appeal to the new leaders. He appealed to them to channel grievances to ArcelorMittal in one voice.

Seneh also called on the government to review the Mineral Development Agreement of the concession company to ensure it prioritizes improving the housing conditions of ArcelorMittal workers. He said the agreement required the company to provide housing facilities with electricity, water, and proximity to quality schooling; however, ArcelorMittal was providing allowances for housing, which is not in the interest of the workers.

“We are urging the government that the issue of housing is resolved at ArcelorMittal because, in coming years, the workers will not tolerate or will not agree to receive anything they call allowance anymore,” Seneh said.

ArcelorMittal’s head of corporate services, Samuel Stevquoah, attended the induction ceremony, where he thanked the union for the smooth working relationship over the years.

“Although a lot of times we disagree, but one thing that we always consistently agree on is the interest of the workers, company, and the strength that you all have in unity,” he said.

He said his leadership would work with ArcelorMittal’s management to construct a washing plant to refine the iron ore before shipment. That construction, he said, would provide additional jobs for Liberians.

“We want to recommend to the government that if an employer comes to invest in this country, the labor unions and all its labor representations must be represented along [in the] negotiation with the government with whatsoever investment that they want to bring to this country because we want to ensure that our people benefit,” Brooks added.

The United Steel Workers from North America and the Solidarity Center from the U.S., supporters of unions in Liberia, extended congratulatory messages to the local union for its induction ceremony.