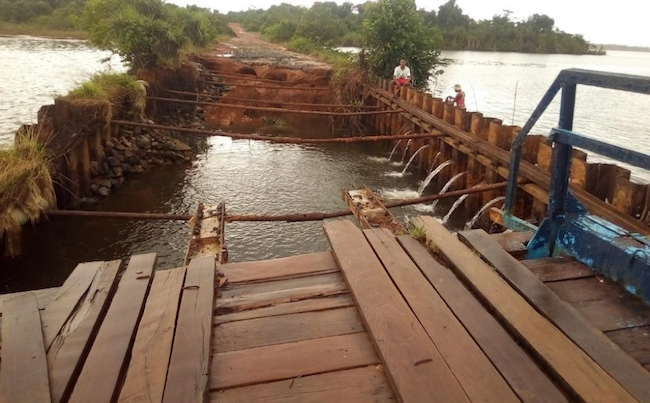 BUCHANAN, Grand Bassa â€“ Nearly five months since the collapse of the bridge leading to the campus of the Grand Bassa Community College, USAID has conditionally accepted a request to repair the bridge.

GBCCâ€™s president, Samuel Monweh, made the disclosure during an exclusive interview with The Bush Chicken in Grand Bassa.

Earlier in August, a team of engineers from USAID concluded a trip to the county to assess the damage caused to the bridge at the request of Grand Bassaâ€™s Sen. Jonathan Kaipay. Heavy rains in July had caused the bridge to collapse, forcing the college to relocate its activities to the Bassa High School Campus on Tubman Street in Buchanan. However, GBCC was forced to move back on its campus as Bassa High and other campuses in the area could not fully accommodate its classes. The college had recently announced a campaign to raise US$1.5 million to rebuild the bridge.

A footbridge constructed over the damaged bridge by residents of the Paynesberry community which hosts the college is now being used to facilitate the daily movement of students and faculty.

A footbridge constructed over the damaged bridge. Photo: Sampson David

Monweh, who recently took over from Samuel Reeves as the collegeâ€™s new president, said USAID had agreed to reconstruct the bridge but stipulated that the government needs to make available all the needed scrap metals.

He said USAID stressed that it would only enter into a contract with a construction company to carry out the work when the metals were available.

The GBCC president said it was seriously challenging for students and faculty to walk on the footbridge to access their campus, as the bridge is not passable by vehicles.

During their assessment, USAIDâ€™s team of engineers, along with engineers from the Ministry of Public Works, had also examined the potential for using a back road to get to the college. According to its report, accessing the college by vehicle without carrying out the repair on the bridge would require the construction of a 7 km road with culverts and mini bridges along three streams.

At the same time, a tentative cost for reconstructing the 510-feet bridge is estimated to be between US$1.5 million and US$2 million.

GBCC was established in 2008 and operated at the Bassa High School campus before relocating to its newly constructed campus in 2016. The campus was constructed at the cost of US$2.2 million.