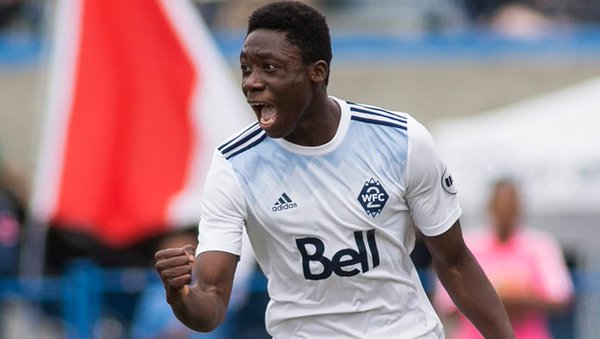 The 15-year-old striker had already played for the Edmonton Internationals, Edmond Strikers, Whitecaps FC Residency, and Whitecaps FC-2 before being registered for Vancouver Whitecaps senior team for the 2016 MLS season.

Davies was born on November 2, 2000, in Monrovia, Liberia before he moved to Ghana with his family to escape the civil war. At the age of five, his family moved to Ontario, Canada, where he grew up and started playing for their youth team, Edmond Internationals.

After a few years with Edmond Internationals, he transferred to another youth side, Edmond Strikers, where he was spotted by the Whitecapsâ€™ scouts.

He ended his career with the Edmond Strikers in 2015 and moved to the Vancouver Whitecaps developmental side, Whitecaps FC Residency that participates in the United States Soccer Development Academy league.

Davies then impressed at the Whitecaps FC Residency and in 2016, was promoted to the United States Soccer League club, Whitecaps FC-2, an affiliate team of Vancouver Whitecaps.

Again, the teenage forward impressed and attracted attention from the senior teamâ€™s coaching staff, which eventually decided to hand him a chance to play on the first team.

Davies signed a first team contract with the Whitecaps on July 15 that will keep him at the club until 2018, with the options of extension for the 2019 and 2020 seasons. At the time of his signing, he was the youngest active player in the MLS, and the third youngest player to have signed a MLS contract.

He became the second youngest player to play in the MLS, behind American forward Freddy Adu, who made his debut in the MLS at the age of 14 for DC United in April 2004.

Two months after signing with the Whitecaps, Davies scored his first senior goal in the 2016-17 CONCACAF Champions League, against Sporting Kansas City. He scored in stoppage time to send the Whitecaps through to the knockout round.

Davies continues to make September 2016 his breakthrough month as he continues to put himself in the MLS record book. In the same September, the young lad became the second-youngest starter in the history of the MLS when he started a game against Colorado Rapids.

Despite playing in just a handful of first-team football games, Daviesâ€™ skills have been noticed across Europe, with English Premier League giants Manchester United and Liverpool showing interest in his service.