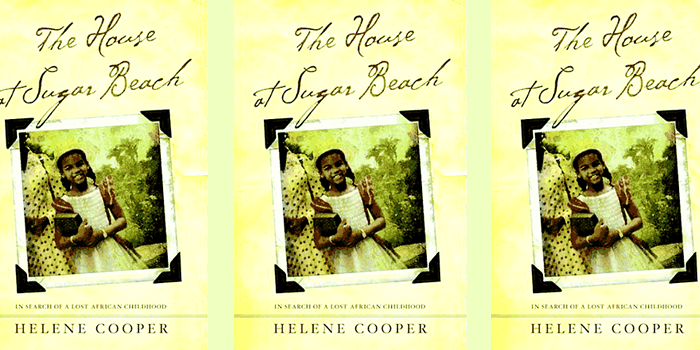 Helene Cooperâ€™s The House at Sugar Beach: In Search of a Lost African Childhood is a warm and inviting memoir that chronicles the coming to age of a Liberian expatriate. With very vivid language, Cooper carefully reminisces about Liberiaâ€™s â€˜golden yearsâ€™ prior to the first civil war. Cooper recounts Liberiaâ€™s history with tact while also sharing some of Liberiaâ€™s rich customs and culture.

As an American born to Liberian parents who also left Liberia due to its civil wars, Cooperâ€™s story resonates strongly with me. It reminds me of many of the stories my parents told me about their lives in Liberia before coming to America.

Cooperâ€™s family is â€œCongoâ€ or Americo-Liberian, descendants of settlers from the United States and a small fraction of the population that has overwhelming political, economic, and cultural dominance in Liberian society. As members of Liberiaâ€™s upper class, they lived comfortably during Cooperâ€™s coming of age story. Her memoir conveys the arrogance and advantages classism allowed â€œCongoâ€ people to enjoy in pre-civil war Liberia, for instance, the many servants that attended to their 22 room mansion on the beach. Nevertheless, Cooper maintains an inoffensive narrative, fairly portraying all classes within the society as viewed by the adolescent Cooper.

While in Liberia, Cooperâ€™s family takes in a native Bassa girl, Eunice. This was a common practice among the upper class in Liberia. Americo-Liberian families would take in a native child who would provide extra help around the house in exchange for being â€œcivilized.â€ Eunice quickly becomes one of their daughters and a sister to Cooper and her younger sister Marlene. The memoir details the sudden separation of the sisters. Eunice, not Cooperâ€™s biological sister, was not able to move to America with the Cooperâ€™s when they fled Liberia shortly after the uprisings. Cooper would not see Eunice for many years after that.

The book then shifts to Cooperâ€™s life in America as an â€œAfrican refugeeâ€ and takes on a slightly dull tone. Her family finds the transition to life in America hard, especially since they lived comfortable lives in Liberia. Many Liberians now living in foreign countries will relate to this part of Cooperâ€™s story easily. Leaving home is always a difficult transition, and with it comes the perpetual longing to reconnect with the sounds, tastes and wonderful sites of sweet Liberia. In the end, the book picks up in energy as Cooperâ€™s love for writing lands her a successful career in journalism, leading to opportunities abroad. In fact, it was a near-death experience in Iraq that persuaded Cooper that she had been away from home for too long. After 20 long years, she journeyed back to Liberia and reconnected with Eunice.

The House at Sugar Beach is not just Cooperâ€™s story; it is the story of thousands of Liberians all around the globe who remember Liberia as a beautiful, progressive, and independent country. The story encompasses historical context, tragedy, Liberian anecdotes, and triumph. In sum, it is a very sincere memoir, written so masterfully that I finished the book in two days.