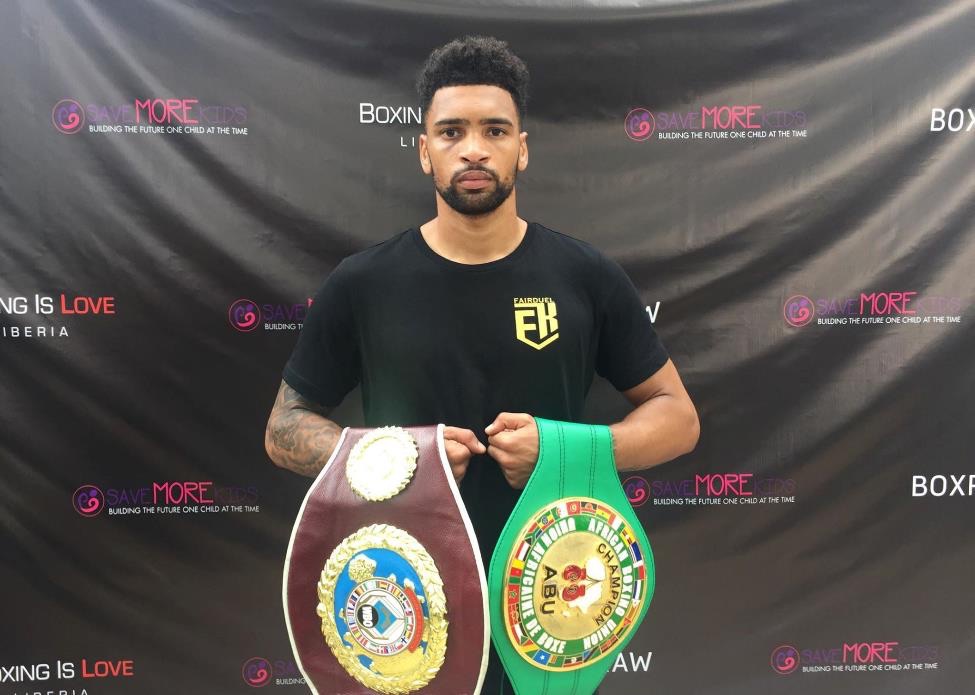 MONROVIA, Montserrado – International boxing champ, Freddy Kiwitt, has unveiled plans to support grassroots boxing in his native Liberia during a visit to the country.

The son of a Liberia mother and German father, Kiwitt currently holds two championship titles: the African and European Welterweight championships. He is presently visiting Liberia under a special Save More Kids program, in partnership with Boxing is Love Foundation of Boxraw, one of the world’s largest distributors of boxing equipment and apparel, based in the United Kingdom.

Speaking to the press during a public event, Kiwitt says his mission is to change the mindset of young people in Liberia about boxing and to help provide them opportunities and access to competitive international boxing.

Kiwitt is traveling with the executive director of Save More Kids, Quanuquanei Karmue, who also expressed his delight to be a part of efforts to change attitudes in Liberia about the sport and to offer new opportunities to young Liberians to compete in the lucrative multi-billion-dollar sport.

Ben Amanna, the CEO of Boxraw, who is also accompanying Kiwitt to Liberia, disclosed his long-held desire to introduce the sport in Liberia as part of his international outreach. The current trip marks Amanna’s second time visiting Liberia and being exposed to the raw youthful boxing talents available in Liberia.

With the right training, equipment, and exposure, Amanna believes Liberia can participate actively in, and benefit from the global boxing industry.

“As we come here, we are not trying to make everyone into world champion boxers. That’s not our goal. Our goal is to try to change the mindset,” he said.

Kiwitt and his team have disclosed plans for the construction of a boxing gym next year, first in Monrovia, and later to other parts of the country. The team has since initiated preliminary discussions with Liberia’s sports authorities and relevant policymakers towards this goal.

It has been more than a decade since the civil war that Kiwitt has been back to Liberia, having fled home to Germany with his father. He was, therefore, delighted to be back in Monrovia with his father in 2016, and now with his professional team.

It was during his visit in 2016 that he grew interested in introducing professional boxing to Liberia. Without knowing exactly where and how to start, this second trip was, therefore, needed. It also follows his contact with Jason Scalzo, the executive director of Boxing is Love.

“So, when Jason contacted me saying they have ideas to bring boxing to Liberia, I said yes, count me in, I want to do it,” he said. “When we started the boxing program, it was something my heart was telling me to do. By that time last year, I had none of these titles. It’s only by the grace of God I hold these two titles.”

Kiwitt has made history as the first Liberian to win these two prestigious international titles. In doing so, he has also proven his critics wrong and put Liberia permanently in the annals of boxing history. He, therefore, asked all Liberians to support and pray for his success as he prepares for a major world championship fight in December.

“By the grace of God, we will have a world champion soon. I have been training hard, and I hope I will get all of your support to put Liberia back on the map,” he said.

Sharing
Tags Freddy Kiwitt, Ministry of Youth and Sports
Contributions to The Bush Chicken are not tax deductible.