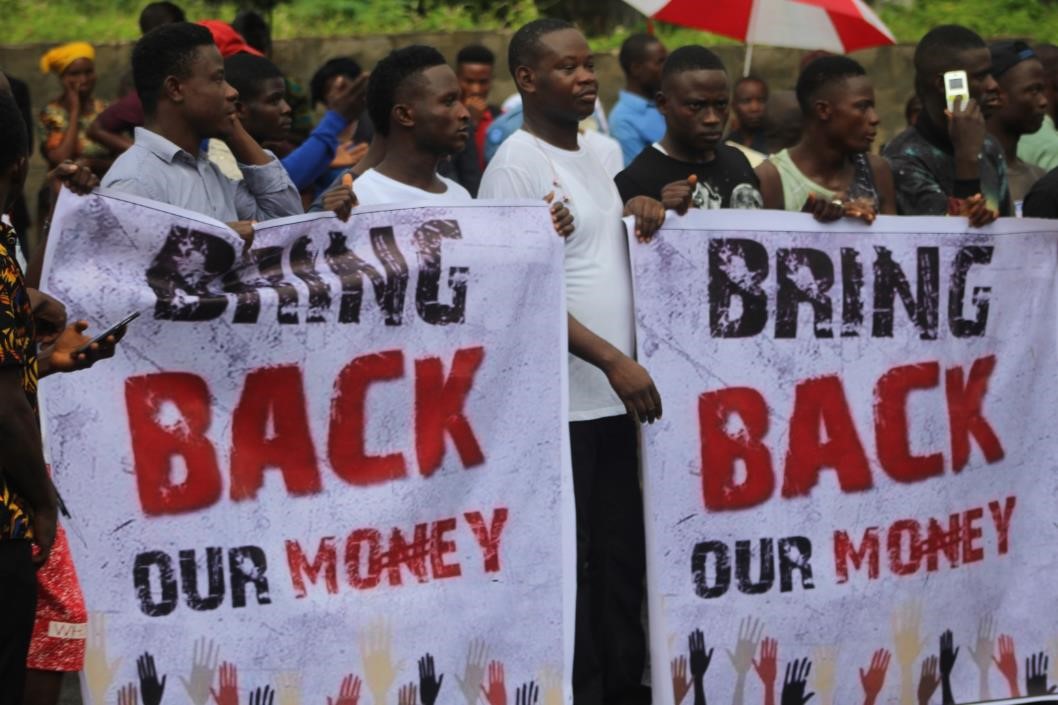 MONROVIA, Montserrado â€“ In the wake of billions of Liberian dollars in banknotes reportedly going missing, several groups of Liberians staged a peaceful protest outside the U.S. Embassy on Monday, September 24 and intensified their campaign to mount pressure on the government.

The protestors gathered under the banner of the Concerned Citizens United to Bring Our Money Back, a coalition of 26 civil society groups including the Economic Freedom Fighters of Liberia and the University of Liberiaâ€™s Student Unification Party.

The protest aimed to mount pressure on the international community to pressure the government to investigate the missing banknotes and other critical transparency and anti-corruption issues.

As early as 8:00 a.m., the protestors began making their way from Sinkor and other parts of Monrovia to the U.S. Embassy on Benson Street.

The protestors, who defied the rain, chanted various slogans against President George Weah and his government officials including â€œWeah says heâ€™s a striker, but the oldma dribble him,â€ â€œWeah is a country and container giant,â€ and â€œPro-Poor government, our children want go to school.â€

Although the protest was organized by nonpartisan groups, it attracted several leaders of opposition political parties including Mo Ali of the Unity Party, Kla Edward Toomey and Daniel Sando of Liberty Party, and Horatio Gould of the Alternative National Congress.

Ahead of the protest, the government assured its citizens and foreign nationals to go about their normal activities, but most businesses in Central Monrovia remain closed on Monday.

The protestors later presented their petition to representatives of the U.S. Embassy on Benson Street. They then presented the petition to the European Union at Mamba Point, before moving to the United Nations headquarters at 1st Street, Sinkor.

In their petition, the protestors called on the international community to withhold â€œall direct support (in terms of financial and non-financial aid)â€ to the government until it can fully account for the missing money.

As the petitioners drew attention to President George Weahâ€™s â€œgiant-sized private properties being constructed and/or purchased,â€ they additionally called for the international community to pressure the government to have all public officials declare their assets.

The protesters further called for an expedited establishment of a war and economic crimes court to â€œend the longstanding culture of impunity.â€

According to the protestors, the government cannot be the accused, defendant, and at the same time be the jurist.

The protestors further assured the Liberian people and the international community that they will remain peaceful, civil, and mature as they pursue an end to systemic corruption in the country. Protestors paraded the streets of Monrovia in demand of the missing billions. Photo: Zeze Ballah

Since news emerged on September 13 of the missing billions of dollars in printed Liberian banknotes, the government has still not provided details fully explaining the situation to the public.

Government officials have been giving contradictory accounts on the figure of the missing banknotes. The figure was later revised from 16 billion to L$15 billion by Finance Minister Samuel Tweah, who blamed the media for distorting the number.

Former President Ellen Johnson Sirleaf has said that under her leadership, no container of money went missing.

Sharing
Tags Central Bank of Liberia, Economic Freedom Fighters of Liberia
Contributions to The Bush Chicken are not tax deductible.