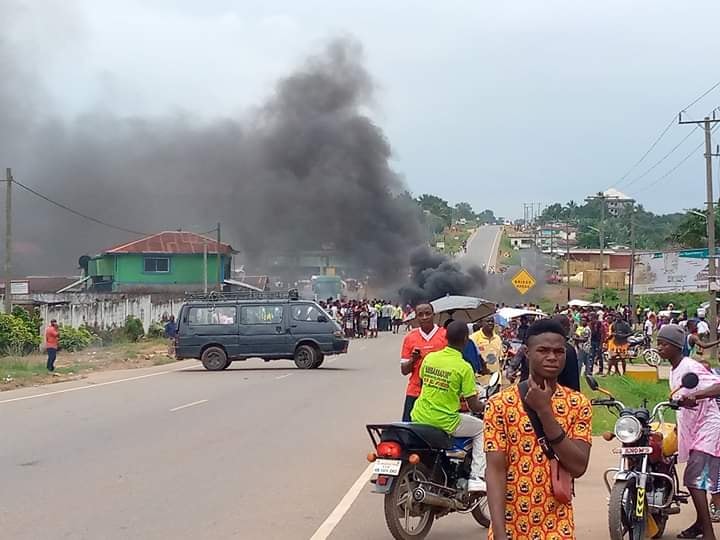 KAKATA, Margibi – Margibi’s capital came to a standstill on Saturday morning when an agent of the Executive Protective Service, Gabriel Kamara, stabbed a car washer to death after suspecting him of snatching his girlfriend’s phone at a local bar the previous night.

According to Forkpa Missar, who owns the car wash where the deceased Abraham Mulbah worked, EPS agent Kamara had visited the car wash along with two other men (including one other EPS agent) in search of the suspect who had stolen his girlfriend’s phone.

Missar said the three men attempted arresting an individual, but they were unsuccessful. They then attempted to arrest Mulbah, who they accused of interfering in their operations.

“Since they did not apprehend anyone, they decided to arrest the boy they murdered and he decided to run and one of them took a plank, knocked [him] on his foot, and he fell to the ground – that’s when he [was] stabbed,” Missar explained.

According to Missar, Mulbah, who was in his early 30s, bled profusely, as the two EPS agents attempted to flee the scene. Bystanders eventually rushed Mulbah to the C. H. Rennie Hospital, where he was pronounced dead on arrival.

Missar described Mulbah as a trustworthy person who had worked as a car washer for the past three years.

Prince Comte, a friend of Mulbah, said they had both just returned from eating at a local cook shop when his friend met his untimely demise.

He explained that the three men had come on the scene with two vehicles, but unlike others who would park and ask for their cars to be washed, they did not do so.

“One of them had [a] bayonet, another with a handcuff, and the other man had an electric baton,” Comte said.

Minutes after Mulbah was pronounced dead by the hospital, angry protesters flooded the scene and began to stone Kamara’s vehicle. They later set it ablaze and the mood appeared to be worsening, prompting the intervention of Margibi’s Superintendent Jerry Varnie, Rep. Ivar Jones of Margibi’s second electoral district. Armed police officers from the Police Support Unit later arrived on the scene.

On Sunday, July 12, the Ministry of Information and Cultural Affairs issued a press release noting that the two EPS officers, Gabriel S. Kamara and Carlay A. David, had been disrobed and turned over to the Liberia National Police for investigation.

“The police have made some arrests while investigating the circumstances leading to the violence. The authorities in the county are authorized to leave no stone unturned in their push towards bringing to book all those involved in Saturday’s violence,” the release read.

The ministry urged the public to “refrain from taking their law in their own hands.”