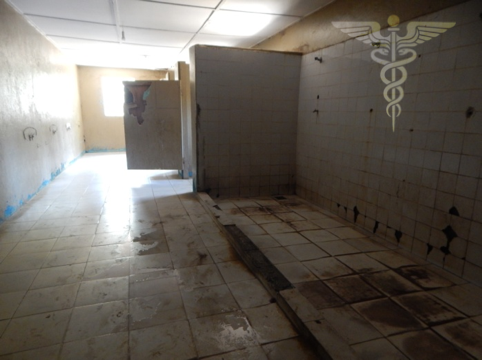 MONROVIA, Montserrado â€“ Several mental health patients at Liberiaâ€™s only psychiatric institution are calling on international humanitarian organizations to rescue them due to the maltreatment they claim to be undergoing.

The patients at the E.S. Grant Mental Health Hospital made the disclosure recently to The Bush Chicken during a visit to the hospital accompanied by experts from the Ministry of Health and the World Health Organization.

The main entrance to the hospital. Photo: Zeze Ballah

El Hadie Raouf Adnan, who was seen holding a bible in his hand, said this was one of the several times he had been admitted to the hospital for a bipolar disorder.

Adnan described the conditions at the institution as inhumane.

â€œWe hardly sleep at night at the hospital because of the mosquitoes,â€ he pointed out.

According to him, all of the windows at the hospital have holes in them, allowing mosquitoes to enter the various wards at night. He then showed visible mosquito bites all on his body.

He further said the hospital lacked enough drugs to regularly supply patients. Adnanâ€™s complaint echoed a concern voiced by the head of the institution, Mamuyan M. Cooper, in a previous article. â€œWe are living in hell here at this hospital and need the help of some international humanitarian organizations,â€ Adnan maintained.

Both he and another patient who was admitted for epilepsy, Joe Dalmeidy, complained that patients were not fed enough or in a timely manner. At the time of the interview, at 11:40 a.m., Dalmeidy said he had yet to be provided with any food.

Cooper maintained that many of these issues existed because her institution is understaffed. She said she had only three nurses, two social workers, 11 mental health clinicians, three physician assistants, seven nurseâ€™s aids and two occupational therapists to cater to 376 patients.

Additionally, she said, â€œthere is only one psychiatrist, Benjamin Harris, who visits the hospital every Tuesdays and Thursdays to review the patientsâ€™ charts.â€

Besides epilepsy and bipolar disorder, Cooper said the hospital was also treating patients with anxiety disorders, schizophrenia, and drug-induced psychosis.