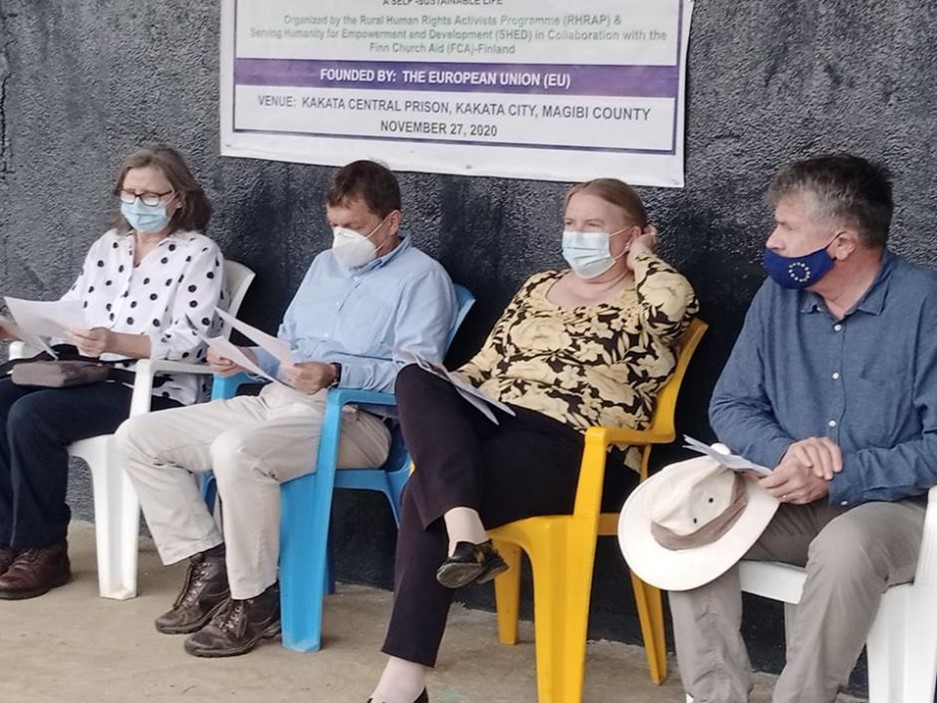 KAKATA, Margibi – E.U. Ambassador Laurent Delahousse has led a high-powered delegation to Bong and Margibi to tour projects aimed at improving human rights for detained persons in prisons in those counties.

Delahousse made a brief stop at the Kakata Central Prison at the start of the tour. The prison is one of several locations in Margibi, Bong, and Nimba benefiting from a US$630,000 grant from the E.U.’s European Instruments for Democracy and Human Rights projects.

The three-year project, which runs from 2021-2023, seeks to strengthen justice actors’ capacities to promote respect for the rule of law, respect for human rights, and adherence to national and international standards for prisoners. The project is also increasing awareness of the rights of prisoners.

Among the activities is providing basic education courses and skills training that have benefited 582 inmates so far. At least 47 inmates have graduated with skills in tailoring services.

International organizations have long expressed concern about the conditions of prisoners in Liberia. The 2020 Country Report on Human Rights Practices for Liberia rated prison conditions as harsh and life-threatening due to food shortages, gross overcrowding, inadequate sanitary conditions, and poor medical care.

“The Bureau of Corrections and Rehabilitation reported the prison population in the country’s 16 facilities was almost twice the planned capacity,” noted the U.S. State Department report. “Approximately one-half of the country’s 2,572 prisoners were at the Monrovia Central Prison, which was originally built for 374 detainees, but as of December held 1,230.”

The report also noted that in some cases, men and women were held in the same prison cell and adults and juveniles.

The executive director of an implanting organization of the E.U.’s prisoner’s rights project said her group was working to reduce the incidence of crowded prisons, slow adjudication of cases, and the violation of pretrial detainees’ rights.

“Many of our prisons were built to cater for a small Liberian population we had before, but right now, as you can see, all of our prisons have become overcrowded because our population is growing while our prisons remain,” said Joyce Pajibo of Serving Humanity for Empowerment, SHED. “[For instance], the Kakata Central Prison was built to host 60 persons, but about 190 persons were in detention when the project started.”

Pajibo said SHED was concerned that the slow adjudication of cases violated the detainees’ rights. No one accused of a misdemeanor should spend more than 30 days without trial in jail, she said. To improve this situation, she noted that SHED is working to fast-track hearings.

“People were being released and going back to the community, and the same prisoners [were] coming back, and we asked ourselves why and we realized that there was no mind transformation process,” Pajibo said.

Likewise, Ambassador Delahousse encouraged prisoners not to see being in prison as an end to their lives but rather as a new beginning. He thanked the Liberian government for allowing development organizations to work with the prison system.

He also thanked the implementers: “This project must be commended because you are helping people integrate into society. They have paid for what they did in the past, and now they have a future.”

The Director of the Bureau of Corrections and Rehabilitation, Sainleseh Kwaidah, said the government appreciates the E.U.’s efforts in improving the condition of prisons in Liberia. With 2,637 people in detention across the 16 facilities across the country, Kwaidah said the E.U.-funded project has significantly impacted prisons in four counties. However, he warned that food for inmates at the Monrovia Central Prison remains a big challenge.

“Right now, the epicenter of Liberian corrections facilities is the Monrovia central prison, where all the problems are represented,” he said. “We look up to the European Union to re-collaborate its effort to see we can get ration from the World Food Programme.”

Sharing
Tags Bureau of Corrections and Rehabilitation
Contributions to The Bush Chicken are not tax deductible.