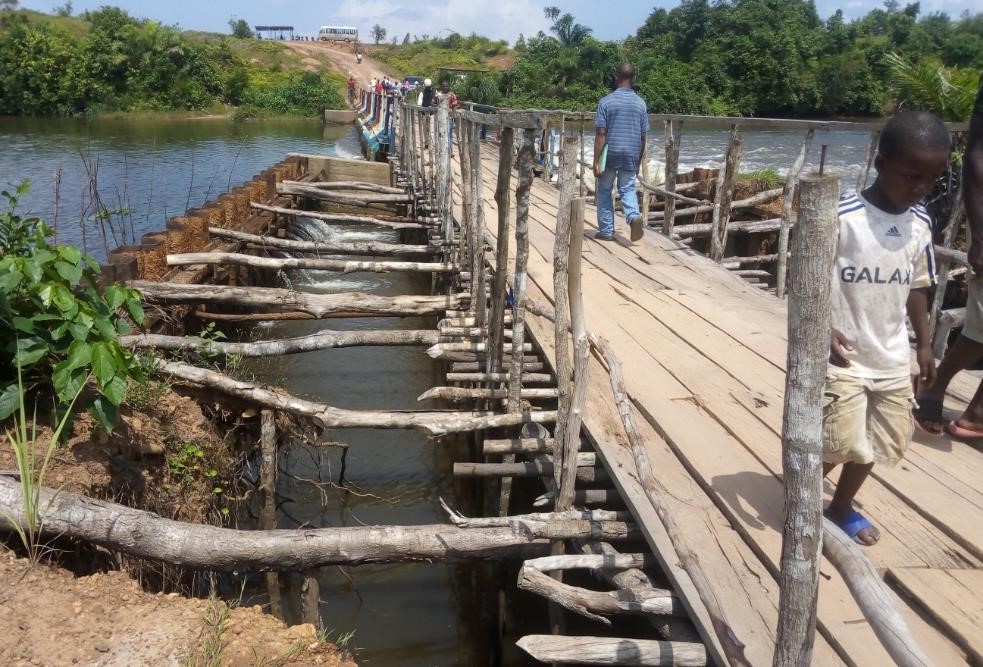 BUCHANAN, Grand Bassa â€“ Efforts to reconstruct the damaged bridge leading to Grand Bassa Community College appear to have suffered a setback as Sen. Jonathan Kaipay has announced that the US$350,000 set aside by USAID to assist the government in constructing the bridge has been diverted to another project.

On Wednesday, June 19, the Grand Bassa senator visited the collegeâ€™s campus where he told students, faculty, and staff that the funds were diverted to another project due to the governmentâ€™s failure to agree to contribute its portion required to reconstruct the bridge.

In July 2018, heavy rains caused the bridge connecting to the collegeâ€™s main campus in the Payneburry community to collapse, forcing the college to relocate its activities to the Bassa High School Campus on Tubman Street in Buchanan. However, GBCC was forced to move back on its campus as Bassa High and other campuses in the area could not fully accommodate its classes.

The college had announced a campaignÂ to raise US$1.5 million to rebuild the bridge. However, the head of the Save Grand Bassa Community College One Dollar Campaign said only US$2,438 plus L$166,960 (US$165) was raised.

Engineers had estimated that the cost to reconstruct the bridge would be between US$1.5 and 2 million.

Sen. Kaipay had lobbied to get a USAID engineering team to survey the bridge and USAID agreed to help construct the bridge but stipulated that the government needed to make available all the needed scrap metals. USAID had promised that it would only enter into a contract with a construction company to carry out the work when the metals were available, according to the collegeâ€™s president, Samuel Monwell.

However, Sen. Kaipay said despite his efforts to get the government to meet its part of the deal, that did not happen. He noted the attempt to get President George Weah to serve as the keynote speaker of the collegeâ€™s graduation ceremony to draw attention to the damaged bridge. However, the president ended up asking the board chair of the college, Lawrence Bropleh, to take his place.

â€œWe had a meeting with the USAID team and the Ministry of Public Works,â€ Kaipay added, noting other efforts to get the government to meet its part of the deal. â€œThe deputy minister of public works represented the minister and we agreed that the Government of Liberia would have made available the deck of the bridge and USAID would have done the superstructure or the abutment and center pier.â€

The Grand Bassa senator further said that stakeholders held another meeting with USAID representatives, who â€œrequested our prompt intervention or else we will miss out on the opportunity.â€

â€œAfter the graduation, I met His Excellency the president of Liberia and conveyed it to him that the reason he was selected to speak was for us to do something about the bridge,â€ Kaipay added. â€œIt will surprise you to note that the president informed me that he has not had details information about this bridge.â€

Kaipay said the president told him that he was looking forward to a meeting between the Ministry of Public Works and the county leadership, but the meeting was not held.

The senator said in January, he received another warning from USAID that if the government did not take advantage of the opportunity, the resources would be used for other purposes.

â€œThat is saddening to you, but I must say the truth to you,â€ he told students and staff at the college. â€œI did not come here as your leader to give you flowery words, but to tell you exactly what the truth is and how do we go further.â€

â€œIf the minister of public works had listened to us to agree to make a commitment to USAID, USAID would have constructed the abutment and the center pier; they just needed a commitment from the government,â€ Kaipay said.

He said the Ministry of Public Works had proposed getting scrap metal from the Timbo River Bridge between Grand Bassa and River Cess, which was being demolished to build a new bridge.

Now that the USAID assistance was no longer on the table, the Grand Bassa senator said the county leadership would engage the Ministry of Public Works to get the cost of the abutment and the center pier of the bridge placed in the national budget.

However, the student council president, Lawrence D. James, said he doubted that the scrap metal from the Timbo River Bridge could hold the bridge to the college over a long period of time.

He recommended that US$1 million from the County Social Development Fund be used to reconstruct the bridge, due to its emergency nature.