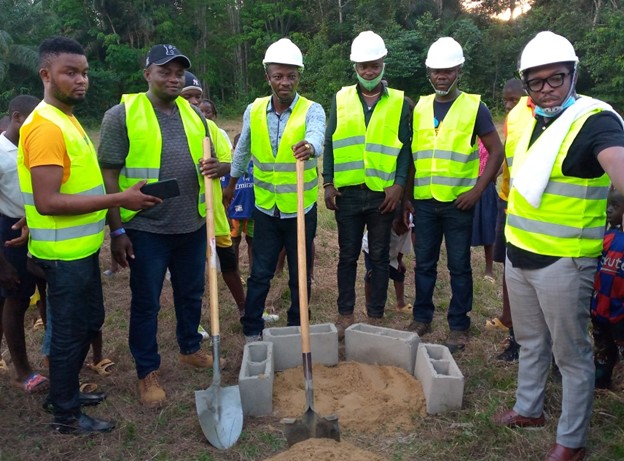 BUCHANAN, Grand Bassa – Officials in Grand Bassa have broken grounds for four projects across the county that will be funded by county social development funds.

The ceremonies took place in Grand Bassa’s first and fourth districts on February 23 and 26, respectively. The construction projects include a market, a school, a clinic, and the extension of the Compound One administrative building.

Some of the county’s lawmakers were present, including Sen. Jonathan Kaipay, Rep. Hans Barchue of the first district, and Rep. Vicent Willie of the fourth district.

The chairman of the Project Management Committee, Moses G. Henry, estimated the total cost of the four projects at US$319,000. The market in Owensgrove cost US$50,000 and the extension of the Compound One administrative building cost US$60,000, while the extension of the Gardour Town School cost US$89,000 and Barseegiah Town clinic cost US$120,000.

Henry said county stakeholders had agreed to fund these projects were resolved at the August 2020 emergency county development council sitting. That meeting was called after US$1.23 million in arrears was received by the county from ArcelorMittal.

Henry said additional projects would also begin in the county’s fifth district. Moreover, he promised that projects that had already been completed would soon be dedicated.

Rep. Willie thanked the county leadership and the Project Management Committee for executing the mandate of citizens.

“When the people are part of decision making, they feel happy and take ownership of the development, but when the leadership decides for them, they sometimes stay away from the project,” he said.

“It’s better to listen to the people and do what they need than to do what we want because they live there and know what they need or what affects them.”

He promised to work along with both the county authorities and the Project Management Committee to fast-track the projects.

He called on the contractors to recruit laborers from within the communities instead of importing workers from Monrovia or Buchanan.

The Barseegiah Clinic is being constructed by Unity Business and Construction Company while Quality Engineering Services holds the contract for the Gardour Town School.

Grand Bassa’s superintendent, Janajay Baikpeh, who also attended the ceremony, praised the people for not only prioritizing the construction of the health facility and school but also providing the land for the construction. He asked them to collaborate with the Project Management Committee and the construction companies to ensure that quality work is done.

“You have been yearning for [a] modern health facility for several years and now is the time for the project. You need to see reason to protect it. See it as your own thing – it is for you,” he told them.

Baikpeh, an appointee of Pres. George Weah, told the gathering that the government prioritizes improving the living conditions of citizens across the country.

“We can feel your pain – we are working with your lawmakers to change your story,” he said. “There is a need for better health facilities and schools. You deserve better.”

A resident of the district, Emmanuel Grimes, spoke on behalf of the communities benefiting from the projects. He thanked the county leadership for upholding the demands of the people, calling it a “dream come true.”

“We have been going to county sittings for several years and, in most cases, nothing happens, but today we are here to break grounds,” Grimes said. “It shows that this government really cares about us.”

Despite the happiness about the imminent construction, residents of Gardour Town recognized that quality education requires trained and qualified staff. They, therefore, recommended that the county leadership ensure that the school would have trained teachers.