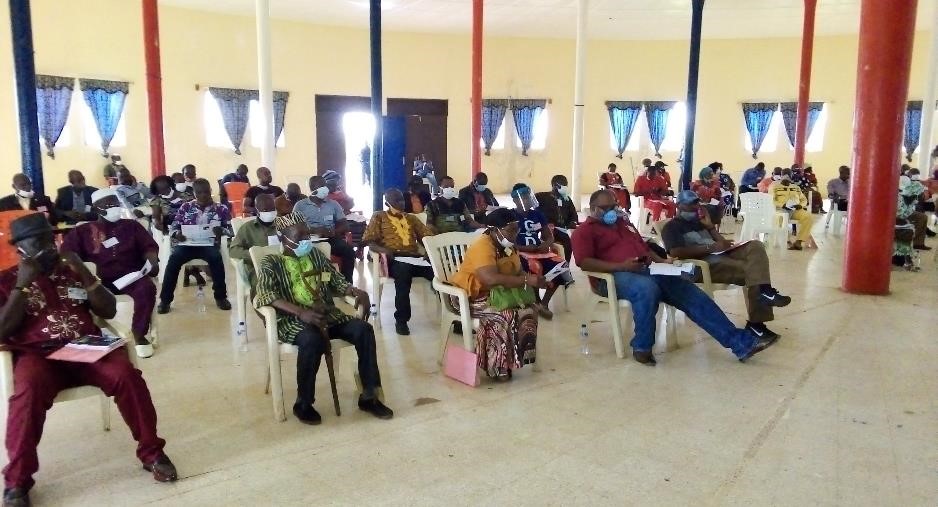 BUCHANAN, Grand Bassa – Delegates at the extraordinary county development council sitting of Grand Bassa have allocated over US$800,000 to a range of development projects that were resolved under the 2018/2019 fiscal year.

The county development council sitting was held over the weekend of August 1 at the Unification Pavilion on the Fairground in Buchanan. The event allowed delegates from across the county to deliberate on how to spend county and social development funds. The delegates reviewed the past projects resolved at the December 7, 2018 sitting, none of which has been completed. Accordingly, they resolved to complete those same projects.

Due to the COVID-19 pandemic, only three delegates were allowed to attend from each constituency, including the county’s nine administrative districts and four cities.

Speaking at the opening of the meeting, Grand Bassa’s fifth district representative and the chairman of the county legislative caucus, Thomas Goshua, underlined the importance of quality healthcare, education, and other human development indicators. He also expressed hope that the sitting would prioritize reconciliation, agriculture, and road and infrastructure development.

He called on the delegates to make decisions on projects that would improve the livelihood and the general outlook of the county.

Rep. Goshua informed the delegates that mining giant ArcelorMittal had provided US$1,023,000 to Grand Bassa as part of its Social Development Fund obligation to the county.

“ArcelorMittal paid 80 percent of what [it] owed the three counties – Bong, Nimba and Grand Bassa,” he said.

He told the delegates that due to the urgency to complete projects that were resolved in 2018, there was a need to hold an extraordinary county development council sitting.

In the 2019/2020 fiscal year, the county did not receive any allotment from the national government to carry out any project delegates had agreed to fund.

During the 2018/2019 county development council sitting, the below projects were resolved to be done, but none was completed due to insufficient funding. 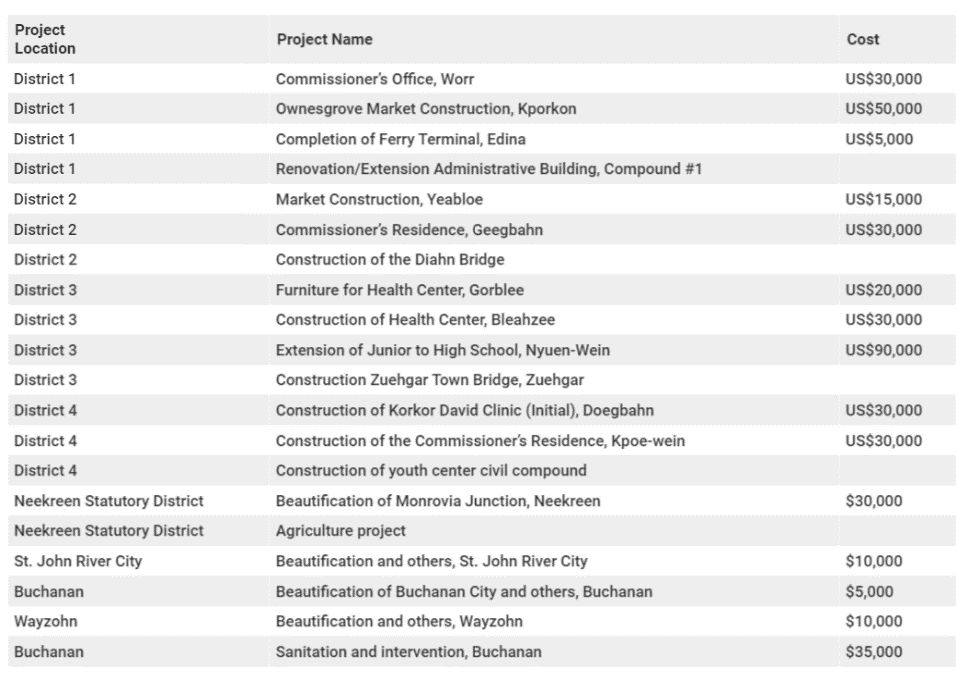 Moses Henry, the chair of the project management committee, which supervises the implementation of projects agreed upon, said construction costs for some of the projects were reassessed and may have increased from the previous cost.

He also disclosed that there are 16 uncompleted projects and programs, worth US$438,500. He expected the county to spend US$872,012 to complete unfinished projects and projects that had not yet been started, meaning that the total amount that would be spent on all the projects from conception to finish would be US$1,023,000 after a 10 percent deduction of administrative costs.

The budget law allows project management committees to use up to 10 percent of funds for administrative costs.

Not all previous projects were approved for funding by the county council; four projects, including the commissioner’s office in the first district, the commissioner’s residence in the second district, Zuehgar Town bridge construction in the fourth district, and the construction of a youth center in the fifth district were placed on hold pending an investigation of the hike in the cost.

The four projects would cost the county US$292,737 if accepted by the delegates. However, an investigative team has been set up to assess the project and report to the county’s caucus within two weeks.

The delegates also set up another investigative team to scrutinize the Grand Bassa Education Foundation and report to the county caucus within one month.