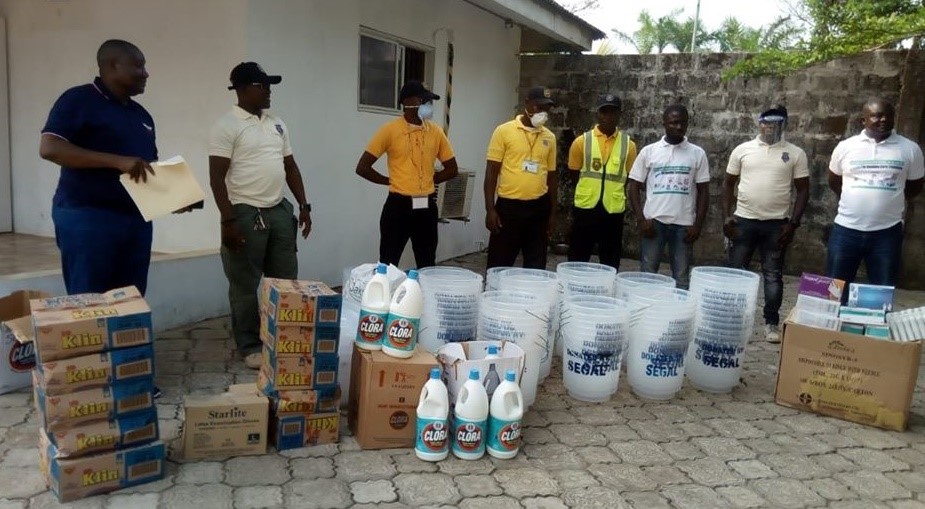 BUCHANAN, Grand Bassa â€“ Grand Bassaâ€™s county administration has begun distributing sanitation materials across the county and pushing to raise awareness about the Coronavirus. This comes as the county begins enforcing its own interpretation of the presidentâ€™s state of emergency declaration.

At a press conference on Sunday, Superintendent Janjay Baikpeh told the press that the US$5,000 used to purchase the materials came from the county and social development funds approved by the Grand Bassa County Legislative Caucus after consultations with stakeholders.

â€œWe are going to ensure that we share these buckets across the county,â€ Baikpeh said. â€œWe have to fight this virus together. This virus is real and not a joke, we have to take it seriously. This is why the county leadership purchased these materials to be taken to the various districts.â€

Some of the materials, like the buckets, will be placed in strategic areas such as public buildings, clinics, and weekly markets, Baikpeh said.

He also noted that the funds would allow the county to hire five persons from each district to be trained to carry out awareness and be paid US$5 per day.

The Grand Bassa superintendent told the public that he needed their participation in following the health protocols: â€œWash your hands continuously. Keep away from dead bodies. If someone is sick, please call the health people or take them to the hospital to be tested. Stop shaking hands and hugging people.â€

Baikpeh also asked people in the county to be wary of visitors.

â€œThose of you who can accept strangers, you need to stop now,â€ he said. â€œIt is not time for strangers. You donâ€™t know whether that person is positive of the virus. After this Coronavirus crisis, yâ€™all will meet.â€

President George Weah declared a state of emergency last Wednesday as part of measures to contain the pandemic. Although Grand Bassa is not one of the counties under an additional stay home order which forbids anyone from being out after 3:00 p.m., county officials initially started closing businesses at 3:00 p.m. on the first day the order came into force.

However, complaints from citizens and subsequent consultations with leaders led the county to allow business operations to be extended to 6:00 p.m., beginning on Sunday.

Baikpeh warned that violators would be dealt with: â€œAt that time, anyone caught by the security while loitering will be prosecuted according to the law.â€

However, there has been no specific regulations announced for dealing with violators of the provisions of the state of emergency. Nevertheless, security officials in the county have already begun accosting violators of the protective measures to issue warnings.

On Friday, ten pastors were invited by the police on the order of the county attorney, Samuel Jacobs. They were accused of having regular services at their churches, with over 80 persons in attendance at each respective location.

Church leaders in Buchanan had previously met with county authorities and agreed to allow their facilities to remain open, but with no more than ten persons at a time. As a result, many other churches have begun having services three to four times a day to accommodate all members.

The ten pastors were warned to not violate the regulations again and to join the county in sensitizing their members about the Coronavirus. However, the pastorsâ€™ presence at the police station drew a large crowd, which began demanding their release. Other pastors later came on the site, including the heads of the Bassa Ministers Association, and the police decided to release the ten original pastors.

Residents demand the release of pastors being warned by the county attorney for holding large services. Photo: Elton Tiah

Meanwhile, county authorities have instituted new measure in Fante Town aimed at curbing the spread of the virus among fishermen and market women who go there to buy fish.

All fishermen and their crew will now be required to log in the total manpower taken along to the sea. The measure is being put in place to ensure that they do not return with strangers.

â€œWe are not here to joke about this virus,â€ Baikpeh said when announcing the measure. â€œThey will be registered and upon their return, we will check them to know whether they do not bring in new people.â€

As the county government takes concrete efforts to fight the virus, companies operating within the county have also been contributing. ArcelorMittal donated buckets, soap, and bleach to the county, as well as US$5,000 to the Save the Liberian Government Hospital Committee to strengthen the countyâ€™s largest hospital.

Over the weekend, the Weah All Stars also presented several sanitation materials, 10 bags of rice, and galloons of cooking oil to the Liberian Government Hospital and the Group of 77, a disabled rights group. The materials donated were worth L$200,000 (US$1,010) and came from former Lone Star players such as George Gebro, Oliver Markor, Joe Nagbe, and Jonah Sarwieh.