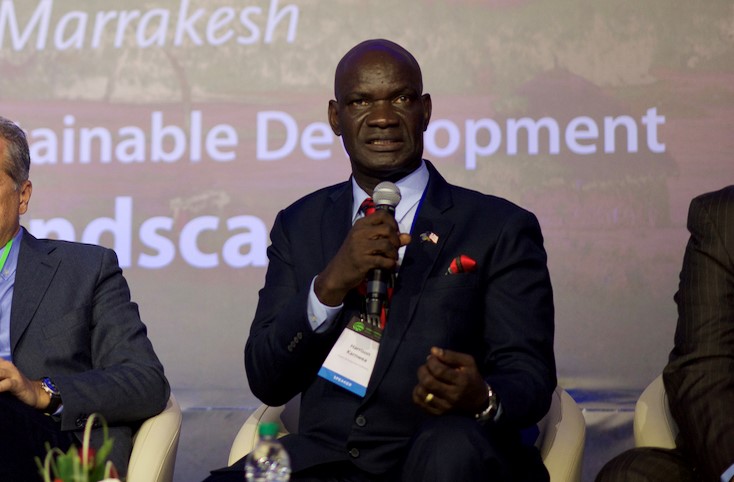 GOMPA, Nimba – A former supporter of the ruling Unity Party and current member of the Liberty Party, Harrison Karnwea, is calling on Liberians to go to the polls on October 10, 2017 to retire Joseph N. Boakai.

Boakai was elected to the party’s ticket in July as the standard bearer on a white ballot for the upcoming presidential and representative elections.

Karnwea maintained that the Unity Party standard bearer is incapable of serving the country should he be elected in October due to his age. He spoke to a crew of reporters in Ganta recently.

“I think Joe [Boakai] has done well as vice president, but he’s gotten older and I think he needs retirement,” Karnwea said. “The older the president we elect, the more of a liability they become.”

The Forestry Development Authority boss said electing older leaders into offices in Africa continues to create inefficiency to the functions of many African Governments.

“Just look across the border in Nigeria and see. President Buhari is lying down in a London hospital while somebody else is governing,” he said.

Muhammadu Buhari, the Nigerian president, spent two months in London receiving treatment due to an illness. He reportedly returned to work on Monday, March 13.

Karnwea said that in the comparison between men and women in respect to aging, women have the advantage, supposedly preempting questions on why he would have supported President Ellen Johnson Sirleaf, who was not much older than Boakai when she was first running for office. He said women still possess the energy to work even into their seventies.

“We men, because of the extracurricular activities, we get sicker, we get weaker while we’re still younger. We sleep during working hours and we become inefficient,” he said. “Most of the time men do not live as women do and cannot be as strong as women are.”

Karnwea recently crossed over to the Liberty Party of veteran lawyer Charles Walker Brumskine. He used to be a member of President Sirleaf’s Unity Party. He rated the Liberty Party flag-bearer as “being younger – a lawyer [who] has served as president pro tempore of the Liberian Senate,” which Karnwea believes makes him qualified to serve as president of Liberia.

Brumskine is seven years younger than Boakai. While Liberian presidential contestants are not legally required to disclose information about their health, Boakai has not been reportedly affected by any major health concerns. However, the vice president has been frequently photographed appearing to be asleep at official functions.