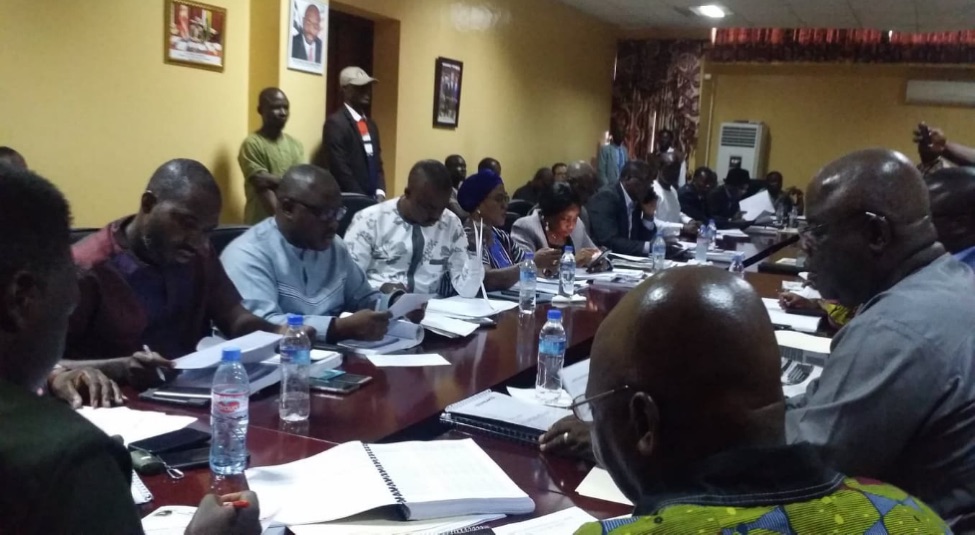 MONROVIA, Montserrado â€“ Members of a joint legislative committee are meeting today on the third day of hearing into the draft budget to determine the abilities of government agencies to generate the local revenue component of the over US$532 million proposed for the 2019 fiscal year.

The budget hearing began on Tuesday with authorities of the Ministry of Finance and Development Planning and the Liberia Revenue Authority appearing before members of the joint committee.

Officials of the Ministries of Justice and Foreign Affairs, the Liberia National Police, Liberia Immigration Service, and Liberia National Fire Service appeared at todayâ€™s budget hearing. Authorities of the Liberia Petroleum Refinery Company, Liberia Maritime Authority, and Ministry of Post and Telecommunications also made their appearances at the budget hearing on Wednesday.

Deputy finance minister for fiscal affairs Samora Wolokolie told lawmakers on Tuesday that the actual revenue to be mobilized domestically is US$472.1 million or 89 percent of the total resource envelope, of which US$465.1 million is core revenue and US$7.0 million contingent revenue.

Wolokolie said US$60.8 million or 11 percent also constitute external resources of which multilateral grants are US$20.8 million and concessional loans are US$40 million.

The minister said Liberia is able to regularly generate US$442.8 million in domestic revenues, given the prevailing economic challenges.

â€œWe have instituted a number of strategic revenue policy measures to be implemented, which is expected to yield an additional US$22.2 million in domestic resource mobilization. The measures are outlined in the detailed assumption,â€ he noted.

The minister has also projected income of US$60.7 million from the key extractive sectors, such as forestry, agriculture, and mining.

â€œThis is on an actual low base of US$48.1 million in FY-2018/2019. You would notice that this figure is also low when compared to a few years back when commodity prices were better than today and the increase is largely due to iron ore mining,â€ he explained.

He said the US$52.4 million revenue forecast is mainly driven by the telecommunications sector, which contributes the largest share of the revenue from services followed by financial and shipping services.

He said the government expects to generate US$116.2 million from the general business sector mainly driven by trade activities especially imports of consumables by large importers. Retailers and wholesalers of petroleum product, fisheries, as well as supermarkets, stores, pharmacies, drugstores, and building materials are also expected to contribute US$36.9 million in all taxes and fees.

He noted that civil service contribution is also expected to generate US$39 million from taxes on salaries and wages, while ministries and agencies are expected to raise US$16.2 million. At the same time, small and medium enterprises would be contributing US$121.8 million.

Finance Minister Samuel Tweah did not attend the budget hearing, having traveled out of the country for an official engagement on the same day. Bongâ€™s third district representative, Marvin Cole, expressed dissatisfaction over Tweahâ€™s absence from the budget hearing, noting that he was notified of the activity long before his travel was arranged.

â€œThere should have been a written communication to this body asking for an excuse, but for the deputy to come here and ask for an excuse for the minister, I strongly believe that the minister needs to be communicated to, demanding an apology, because I don’t see his action in the interest of the committee,â€ Cole said.

However, Nimbaâ€™s first district representative, Jeremiah Koung, who is also co-chair of the committee, suggested that the members of the committee proceed with the hearing in the absence of the finance minister. The hearing later continued, closed to the public.

The revenue component of the budget hearing is expected to continue until August 30. The constitution gives the legislature power over appropriations in the national budget.

The draft 2019 budget was submitted to the legislature on June 28, at least two days to the end of the last fiscal year. The submission followed a prolonged delay by the Executive Branch to submit its budget. Liberiaâ€™s budget year commences on July 1 and ends on June 30 of the following calendar year. However, the executive is required to submit a draft of the budget to the legislature at least two months prior to the start of the new fiscal year.