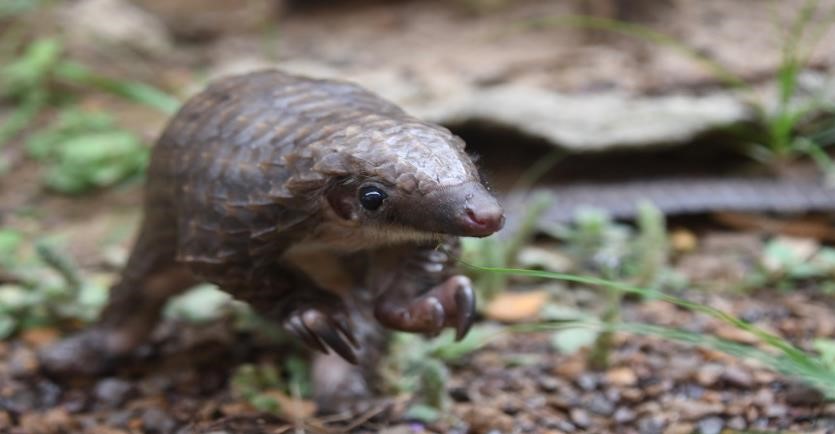 PAYNESVILLE, Montserrado – For the first time in post-war Liberia, Liberia has celebrated World Pangolin Day. The celebration was organized by the Libassa Wildlife Sanctuary, in collaboration with the Forestry Development Authority, the Environmental Protection Agency, the Paynesville City Corporation, and other partners.

The Libassa Wildlife Sanctuary is the only wildlife sanctuary in Liberia that caters to animals such as the pangolin. The Sanctuary collaborates with the Forestry Development Authority to confiscate the animals that are kept as pets or collected for the bushmeat trade and then cares for them before releasing them later into their natural forest habitats.

The pangolin, commonly known in Liberia as ‘ants bag’ because ants make up a key part of its nutrition, is the world’s only scaly mammal. In recent times, the animal has been identified by Chinese epidemiologists as a possible host of the deadly coronavirus now making a global pandemic, with its source in China’s Wuhan City, Hubei Province. But other scientists have questioned the Chinese finding.

World Pangolin Day is celebrated internationally on February 15 each year to raise awareness about the protected status of pangolin and other wildlife.

This year in Liberia, the day was celebrated at the Duport Road Park in Paynesville, where many representatives of government and wildlife conservationists gathered. Present at the event were the managing director of the Forestry Development Authority, Mike C. Doryen; the executive director of the Environmental Protection Agency, Nathaniel Blamah; and representatives from the European Union, the Society for the Conservation of Nature in Liberia, Wild Chimpanzee Foundation, Fauna Flora International, and the Humane Society International. There were also civil society organizations present, in addition to students from various high schools in Montserrado.

Speaking to The Bush Chicken in an exclusive interview at the program, the director of Libassa Wildlife Sanctuary, Julie Vanassche, described the first post-war celebration of Pangolin Day as a historic and remarkable day.

The celebration, according to her, was also meant to create awareness by educating every Liberian, especially students, about the laws against killing pangolin and other wildlife.

Vanassche told The Bush Chicken that her organization is committed to wildlife preservation in Liberia, and will continue creating awareness and sensitizing Liberians that pangolin and other protected wildlife must not be killed. She added, “We are doing our best to protect wildlife. We will work along with others to continue to carry out awareness across the country to ensure that pangolin and other wildlife are protected.”

Delivering the event’s keynote address was the FDA’s Doryen, who thanked Libassa and its partners for observing the event in Liberia for the first time after the civil war, describing it as a milestone and a welcomed development for the wildlife and forest sectors of the country.

“I know we have made progress in our drive to protect our wildlife species. The law enforcement working group is working very hard with the inter-ministerial agencies, along with our NGOs partner. For the confiscation unit, they have been given vehicles, motorbikes, and logistics. They are uniformed,” he said.

“I think as a team, we are [a] little bit slow when it comes to the prosecution of those who are arrested for violating the wildlife law of Liberia.”

However, he noted one of the successes of the recent past: “We recognize the fact that for the time in our country’s history, a preacher has been arrested trialed, convicted, fined US$2,500, and served one or two years in prison.”

The FDA boss called upon all relevant ministries and agencies of government and partners, youth communities, hunter groups, and ordinary citizens to help enforce the law and to remain in compliance with international treaties protecting endangered wildlife.

“Go and protect the forest – the wildlife species,” he said. “Tell your uncles and friends to stop eating wildlife. We are serious. If we catch you with wildlife species, you will be arrested, prosecuted, and sent to jail. We are not going to turn our back on this.”

He once again stressed the fact that killing pangolins and other protected wildlife species is a crime, and anyone caught doing so would be penalized. Despite the enforcement of such a law proving difficult among forest communities for whom the animal is a key source of nutrition, Doryen sounded determined to press forward.