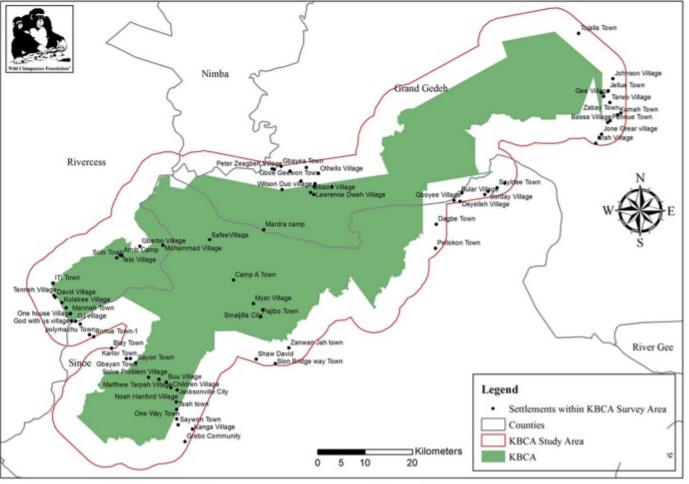 GREENVILLE, Sinoe – As wildlife conservation groups push to establish a proposed Krahn-Bassa National Park, some residents of Geetroh Chiefdom in Sinoe are pushing back. They note that unsettled land disputes in the proposed area make it untenable to push for the park’s creation at this time.

The Forestry Development Authority and the Wild Chimpanzee Foundation have been meeting stakeholders to get their support for the Proposed Krahn-Bassa National Park after a 2014 research showed that Liberia had the second largest population of western chimpanzees, a subspecies native to West Africa. The park would be located mostly in Grand Gedeh and Sinoe, with smaller portions in River Cess and Nimba.

Bladee Nenneh, a stakeholder and former youth president of Geetroh, took to a local radio station where he said there was no need for the FDA and its partners to keep pushing for the park when there are existing land conflicts.

“We don’t want any problem between River Cess and us because you can’t establish a national park on land that two counties are claiming,” Nenneh said. “If they want to do so, then there should be a need to get the boundary issues with the two counties resolved.”

Nenneh’s comments were an echo of a letter the community recently sent to the FDA on May 23 rejecting the park’s establishment.

“We, the citizens of Geetroh Chiefdom, strongly reject the establishment of the Krahn-Bassa Propose Park on our land,” the letter read. “It’s not healthy for us.”

The community also added in its letter that there had been no engagement or awareness activities about the park in their area. They called on the government to resolve the boundary issues between the two counties before proceeding forward.

Meanwhile, Sinoe’s superintendent, Lee Nagbe Chea, told reporters that the FDA and its partners were still working behind the scenes to establish the park. He promised that more information would be provided to the affected communities on how they would benefit from the park’s establishment.

He urged the citizens of Geetroh to remain peaceful while dispelling some rumors he said were being spread about his intentions to cheat the affected communities.

The Bush Chicken reached out to the FDA for comments but did not respond in time for publication.