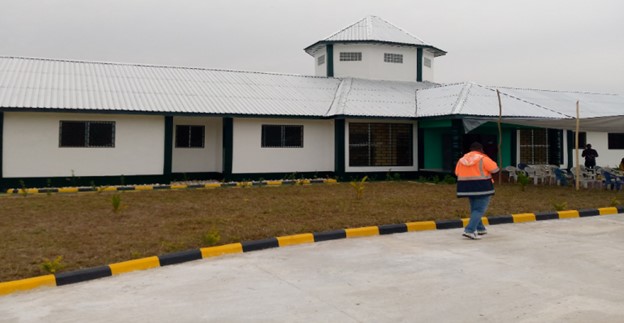 TUBMANBURG, Bomi – A US$330,000 regional complex built in Bomi to host the Forestry Development Authority and the Environmental Protection Agency has been turned over to the government.

The building was funded through the Liberia Forest Sector Project, which is financially supported by the Norwegian government and managed by the World Bank.

Saah A. David, the national coordinator for Liberia’s effort to implement the Reducing Emissions from Deforestation and Forest Degradation program, known as REDD+, said the facility is one of two regional offices being constructed to strengthen the institutional capacity of agencies working within the forestry sector to protect the environment.

In 2014, David said Liberia and Norway signed a letter of intent to implement the Liberia Forest Sector Project. The project was funded through US$36.7 million in grants provided by Norway and an additional grant of US$4.7 million from the Liberia Forest Landscape Single Donor Trust Fund.

“We will commend the international partners for their many support in helping us protect our forest today, but we started this thing way back when we were growing up – traditionally, people were prevented from using certain portions of the forest – that was another form of conservation,” he said.

Doryen boasted of Liberia’s share of 50 percent of West Africa’s rainforests. He attributed this fact to Liberia being the only country in the sub-region that has been able to sustainably and effectively manage its forests.

“Every time when people are discussing the forests of Liberia, they tend to speak in the future tense,” he said. “They usually say, ‘We hope that Liberia will manage their forest in a sustainable manner,’ and I always correct them.”

Doryen noted that Guinea, Ivory Coast, Sierra Leone, and Liberia all had large rainforests. “What is the story? Why is it that Liberia is the only country that has nearly 50 percent of the remaining forests, not just in the four countries – it is because we have sustainably managed our forests well,” he said.

The FDA managing director added that Liberia has been protecting its forests throughout history. In the past, he said some regions were conserved by traditional leaders in an effort to protect the forest.

With regards to the new complex being provided to his agency, Doryen said he was pleased to see the construction of major facilities meant to decentralize the operations of ministries and agencies across Liberia.

He noted that the FDA had contributed to securing this property and had initially tried to securing funding on its own to complete the building. He emphasized the need for government agencies to own their own facilities, instead of continuing to rent from private entities.

The EPA’s executive director, Wilson Tarpeh, was also at the ceremony marking the turning over of the facility to his agency and the FDA. He also highlighted the importance of the Liberian government owning its own facilities instead of renting.

“This is a very good and new beginning for this government and in this country to see that instead of continuing to rent, we can begin to construct,” he said. Of the 67 buildings occupied by ministries, agencies, and commissions, Tarpeh said only 11 buildings are owned by the government.

He thanked the World Bank for its support to the Liberian government.