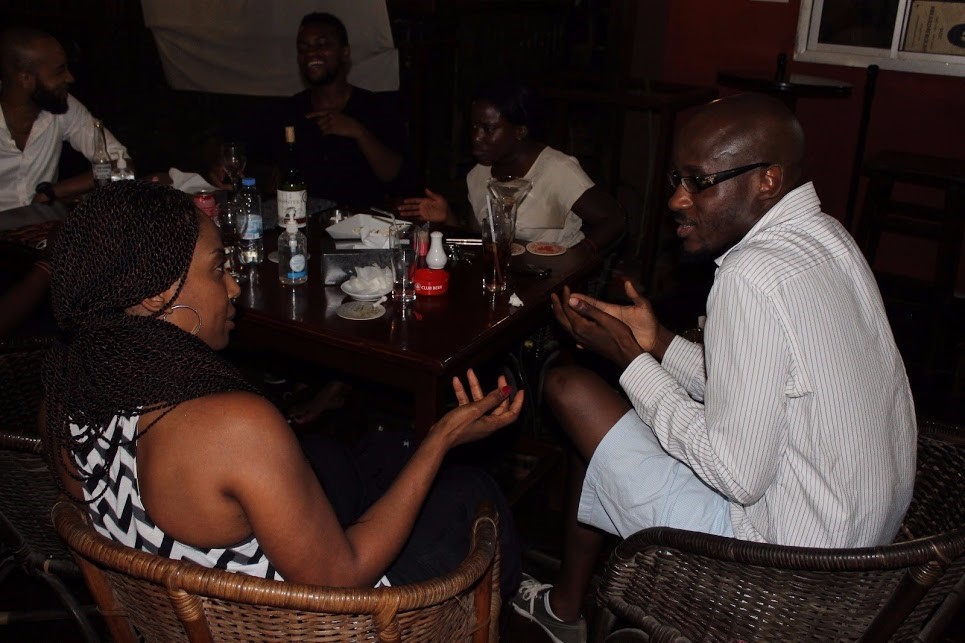 â€œMeet me outside the gate,â€ my friend directs. I step outside of the compound and ease into the heaven that is an air conditioned car. I literally have a few seconds of being in a state of complete euphoria.

The home I am staying at has no A/C, so the unexpected crisp air against my face feels wonderful. We head into town for an interview my friend has scheduled with a high ranking official on the Ebola Task Forceâ€¦ yep, it’s back.

Unfortunately, or coincidentally, since we arrive ten minutes past the scheduled interview time, the official has left the building and is no longer available to speak with us. I say this could be coincidental because there always seems to be something preventing us from getting the kind of interviews we want for our stories â€“ we are not deterred, we will continue to report the news.

Leaving a bit dejected with about 30 minutes wasted trying to get a surrogate to speak with us on the task forceâ€™s position regarding the most recently reported case, we leave and head towards Central Monrovia.

Having not eaten breakfast and exercising generally poor eating habits since arriving in the country, I tell my friend we need to make a pit stop so I can grab a bite. The first place he suggests is a supermarket that has a small deli inside. Once we park the car an elderly man on crutches with a pronounced disability approaches my car door and opens it for me.

Assuming the gentleman offered the kind gesture in preparation to ask for spare change was incorrect. In fact, according to Liberian custom (according to my friend) the man had actually EARNED a donation by merely opening the door which was unsolicited. Unaware, I thanked the man and began to walk towards the supermarket.

My friend, however, handed the man L$15 then came with me towards the market. â€œIn the future donâ€™t let people do things for you if they doâ€¦even if you didnâ€™t ask them, youâ€™ll need to give them somethingâ€ my friend informed me. â€œRight,â€ I thought.

I head toward the supermarket door and reach to open it only to be startled by a uniformed security guard barking, â€œHands, Hands, Hands!â€ Despite having been through this at the airport, at the supermarket yesterday, at the gas station, and at the Ebola task force office, I still canâ€™t remember to stop and rinse my hands when I see the sanitizer buckets near an entrance.

Officer Friendly was kind enough to remind us gently. Inside, weâ€™re greeted by a menu of lackluster offerings and even less enthusiastic service. Itâ€™s a trend here. Unimpressed, we decide to walk a building over and head to the Peace CafÃ©, which happens to be Liberian owned, bonus.

Adjacent to a gas station on the main road, the cafÃ© offers modern furnishings and an uncluttered airy layout. Small, but clean and nice. The friendly waitress brings us menus with more American offerings and prices as well as a few traditional Liberian options.

Despite wanting desperately to order the potato greens, I opted for the chicken wrap â€“ wrong choice, but when youâ€™re hungry, you really donâ€™t care once the food is served.

Next stop â€“ downtown Monrovia to get my hair braided.

We arrive at a pretty non-descript shop, couldnâ€™t tell you the name because I donâ€™t remember seeing a sign with one. After negotiating the cost of the hair (everyone is trying to hustle me because of my accent), I enter the cramped braiding area that contains about 15 plastic outdoor chairs in front of hastily manufactured mirrors and booths.

The bright green paint color theyâ€™ve chosen to spruce up the space is really not yielding the intended results – itâ€™s pretty depressing in here. The braiders start blending the hair together and begin to install the braids. Itâ€™s hot in this room, and there are no windows.

Barely 30 minutes into the service I notice the braiders are still attempting to hustle me, smh. The ladies are braiding my hair small around the edges â€“ the size I requested â€“ but much larger in the middle of my head. I tell the braiders to stop braiding please and ask them not to continue making the braids larger in the middle of my head; they should all be the same size. Unaware or assuming that I donâ€™t understand Liberian English, they start to have a conversation with each other about me.

â€œJessina I told you not to be making the knot big, big for the girl not to know,â€ Braider One says.

â€œIâ€™na make the knot big, de girl put her hand deh and she say I make the ting big,â€ Braider Two chimes in.

â€œYes, youâ€™re making the braids too large, and I can understand every word youâ€™re saying so please just do it correctly, OK?â€ I join the conversation.

â€œSorry ma. We will make it fine for you, yâ€™eh?â€ says a surprised Braider One.

Six hours, 24 traveling vendors, and one big argument over whose client I should have been, later I was finally done with my hair. It was perfect. I left both ladies a generous tip and offered them a ride home as the shop was closing.

My friend picked me up, and after we had dropped one of the braiders off, we headed to a restaurant in Sinkor called Lila Brown to meet up with some of his friends. After a spirited discussion about politics a pretty good fish meal and enjoying the pleasant ambiance of the restaurant about two hours had passed, and we were headed back to my host’s house to call it a night.

Daily Thought: If Americans had to do what many Liberians have to do to earn one hour of minimum wages they could not make it.