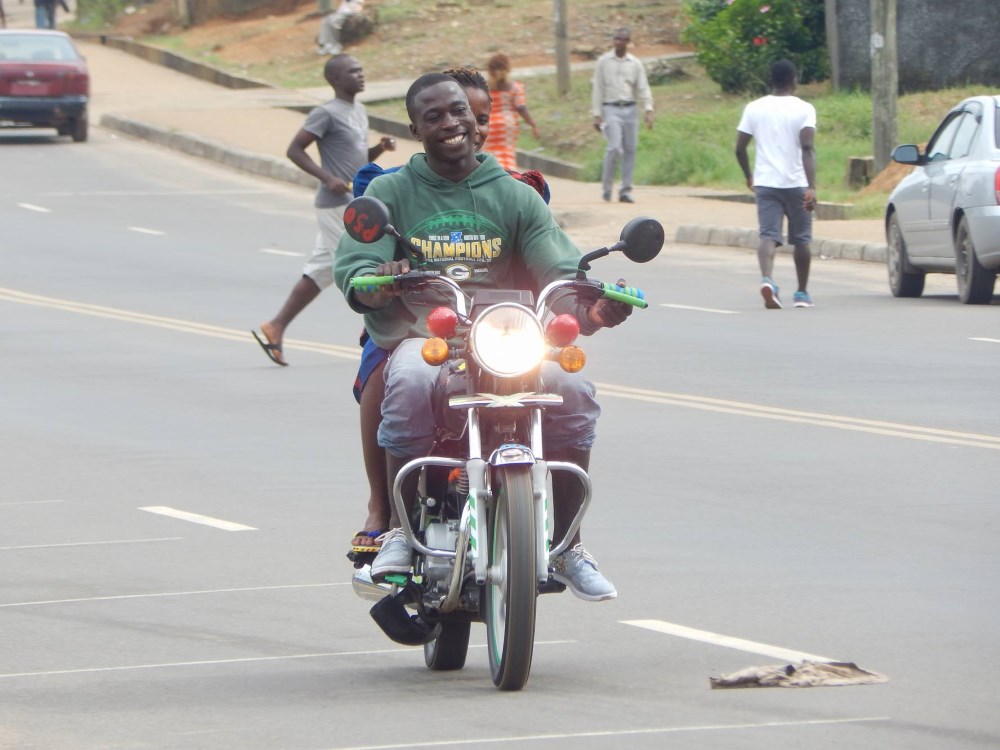 My friend picks me up, and we head towards Duport Road for a meeting with some of the staff members. Along the way, Iâ€™m taking in the sights, smells and sounds, allowing the breeze to provide me fleeting relief with an arm haphazardly stretched out of the car window.

â€œYou muh na put your hand inside yâ€™eh!â€ says the driver of a motorbike passing to our right. I definitely heard him; I was just oblivious at whom the statement was directed.

â€œMa, I beg you, put your hand inside yâ€™eh,â€ the second driver of another passing motorbike says.

Somehow I felt they may have been yelling at me after the second remark, but I was transfixed on all the activity along the road, so my arm remained out the window.

In the front seat, the passenger glanced at me through the rearview mirror and told me it might be a good idea to put your arm in the car, so they stop yelling at you.

After picking a few of the reporters up, we finally arrive at the location of the meeting. Itâ€™s a modest residential house with a small open living room with just enough space to fit all of us comfortably, but not quite enough circulation to allow a good breeze to pass through the room. Four hours later, we wrap up the meeting eat some jollof rice prepared by our host and head to the next stop.

During a brief break during the meeting, I step out of the house for some fresh(ish) air and a quick walk around the area. The location is different from where I was yesterday, but the scenery is the same. More small inexpertly constructed structures with the exposed earth littered with a landscape of garbage. Some homes are erected with scrap zincs, wood planks, cement blocks, and any variety of materials patched together to make a shelter. While walking, I take out the mini Skittles packs I carry around in my backpack to give to kids. I approach two young girls engaged in a very lively conversation.

Apparently, Princess, the elder of the two, is at her wits’ end about the delegation of housework, feeling that she is assigned an unfair amount of chores relative to that of the other children in the home. Well, this was my synopsis, her version of the events was much more theatrical.

I learn the young ladies’ names are Grace and Princess, six and seven years of age respectively. Grace lives in the house diagonally across from the house where our meeting is being held, and Princess has recently been sent to come and live with her relatives in that home. Princess tells me she misses her mother in the interior and does not like the old lady she lives with because she beats her all the time. Princess doesnâ€™t like getting beatings and says the old lady does not like her.

Her mother sent her to the house to have the opportunity to attend school. Ironically, she still wasnâ€™t in school, but she should be in K2. I give them some candy and head back to the house to sit outside for a while. As children pass by the house, I give them some candy. First, three or four kids come by together, then another three or four come by, then presumably the word spreads quickly and there are almost sixty children who come to get candy from me.

In less than 30 minutes, Iâ€™m all out of my candy stash for the day. Funny, had I even been spotted giving kids candy in the states, Iâ€™d be in jail for trying suspicion of wanting to maltreat children, but here, itâ€™s totally different. Nobody seems to be concerned. In fact, with the number of very young unsupervised children Iâ€™ve encountered, I canâ€™t be sure some of the parents know where their kids even are.

Shortly after eating, we leave and head to a small church which is hosting a post-Easter childrenâ€™s program. The program is short and sweet. All of the children were very well rehearsed and knew their lines with almost no one forgetting their part. None of the fidgetings, giggling, and nose-picking shenanigans you would see in a program with children this age in the states.

Once the program ended, we began to head back to my living quarters after a brief pit stop at the gas station. Iâ€™m starting to notice that everywhere I go, people are looking at me like I have three eyesâ€¦.this is very interesting.

Daily Thought: How do we approach parents about other ways to discipline their children besides physical correction?