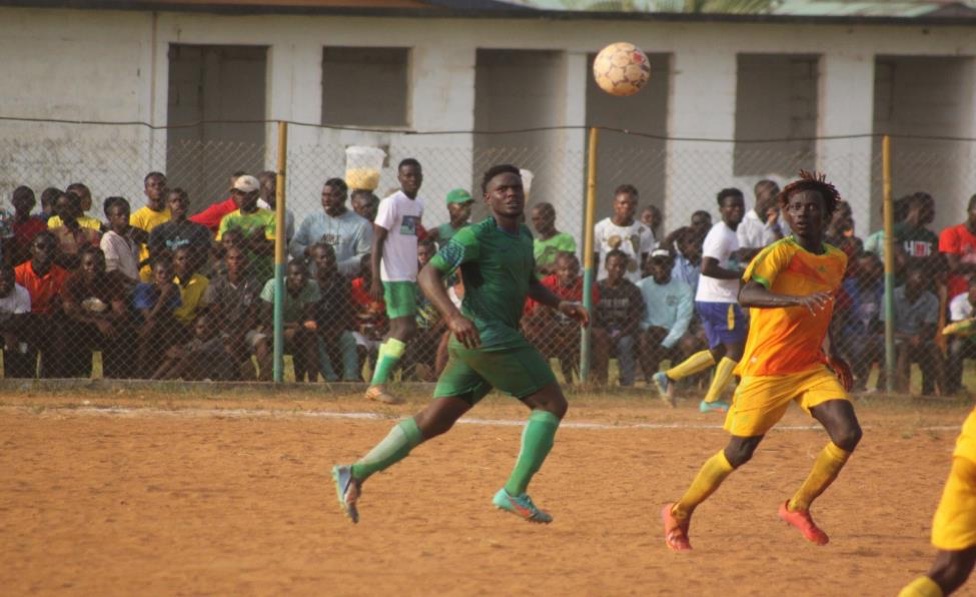 HARPER, Maryland â€“ The fight to reach the 2019-20 National County Sports Meet quarterfinals continued on the second matchday, with Maryland grabbing its first win of the competition, while Gbarplou and Lofa safely secured their places in the quarterfinals.

The Boys of Cape Palmas restored the hopes in their fans in reaching the quarterfinals following an important win over River Gee at the Martha Tubman Stadium in Harper, Maryland. After being held to a goalless draw on the opening day of the competition by Grand Kru, Maryland badly needed a win against River Gee to ensure it overcame the zonal stage, and remain in the tournament.

At the overcrowded Martha Tubman Stadium, the Group C hosts narrowly defeated River Gee 1-0 to be level on points with Grand Gedeh, which was held to a 1-1 draw by Grand Kru. Patrick Dweh scored the only goal in the second half to help the Marylanders celebrate their first three points in the competition.

It was an overwhelming double-victory celebration for the Marylanders, as their kickball team also bounced back from its opening day defeat to Grand Kru, to win 5-4 against River Gee.

Meanwhile, Grand Gedehâ€™s kickball team suffered yet another disappointing setback in its second consecutive match with another defeat. Like Marylandâ€™s kickball team, Grand Gedehâ€™s kickball squad was unable to come back from an opening day defeat 3-2 to Grand Kru. After both teams completed two home runs each in the regular five innings, extra innings were needed to get the winner. Grand Kru prevented Grand Gedeh from making any home-run, before scoring one in its extra-inning to seal an important win.

The second match day was a complete disappointment for Grand Gedeans. The countyâ€™s kickball team lost, and its football squad was also forced to a 1-1 draw with Grand Kru, ending the match with only 10 players. Grand Gedehâ€™s football team needed just a win against Grand Kru to sail into the quarterfinals. With this draw, their hopes were finally dashed.

It all appeared like Grand Gedeh would seal a quarterfinals spot when Dam Weah gave it the lead in the 26th minute. Weah scored the only goal in the first half to take Grand Gedeh to the break with a lead. Soon after, however, Grand Kru got things leveled in the second half from the penalty spot through Rufus Kennedy.

Three minutes into the second half, center referee Julius Pongay pointed to a spot for handball. It was this moment that interrupted the match, as Grand Gedeh players protested Pongayâ€™s call. Grand Kruâ€™s captain, Rufus Kennedy, took the challenge and converted the shot into a goal, leveling the scoreline.

Tension rose on the pitch following this equalizer, and Facell Sheriff was sent off for attacking the referee and hitting Grand Kru defender, Elkee Johnson, in the face. Playing 10 against 11, Grand Kru failed to score another goal, thus settling for a 1-1 draw.

The results on matchday two have made the final round of matches more interesting, with three out of the four counties standing the chance of qualification. Both Maryland and Grand Gedeh will need a win if they are likely to have a place in the quarterfinal when they meet each other on the final day of the group games. A draw for both teams will mean that Grand Kruâ€™s chances of qualifying remain high.

A draw for Grand Gedeh and Maryland, and a win for Grand Kru with more goals against Grand Gedeh, will end the hopes of the host, Maryland.

In Northern Liberia, the football squad of Group B host, Lofa, also sealed its place in the quarterfinals following a 1-1 draw with Bong in Voinjama. The Wologisi Boys won their first game against Nimba, and only needed a draw to reach the quarterfinal. With three teams in Group B, Nimba is out of action as it waits on the last day to play Bong in a must-win match.

To reach the quarterfinals, Nimba must win against second-place holder Bong, which sits on the log at one point. A draw for Bong will be enough to push the team through to the quarterfinals. Like its football team, Lofaâ€™s kickball squad also reached the last eight of the competition following a 6-2 win over Bong.

Meanwhile, Grand Bassaâ€™s football team continues to struggle in this yearâ€™s competition, following another draw. The Group B host held Margibi to a 1-1 draw at the Doris Williams Stadium in Buchanan to send it waiting to qualify on the final day, while River Cess secured its first three points with a win over Sinoe, following its goalless draw with Grand Bassa on the opening day.

Group A host, Grand Bassa, now sits third with two points, two less than leaders River Cess, and a point behind second-place Sinoe. Bassa must win its match against Sinoe in the last group game to reach the quarterfinals, while a draw for Sinoe will send it to the quarterfinals if Margibi also draws or loses to River Cess.

Just like Grand Bassa, Group D host Grand Cape Mount stands on the verge of missing out on the quarterfinals after obtaining one point in its two games. The team suffered a 1-0 defeat to Gbarpolu, while the football defending champs, Bomi, continues to search for three points following its goalless draw with Montserrado.

In kickball, Montserrado continued a good show in its second win of the competition. The team sealed a 3-1 win over Bomi, while Gbarpolu bounced from its defeat to Montserrado to grab a 7-2 win over host, Grand Cape Mount.