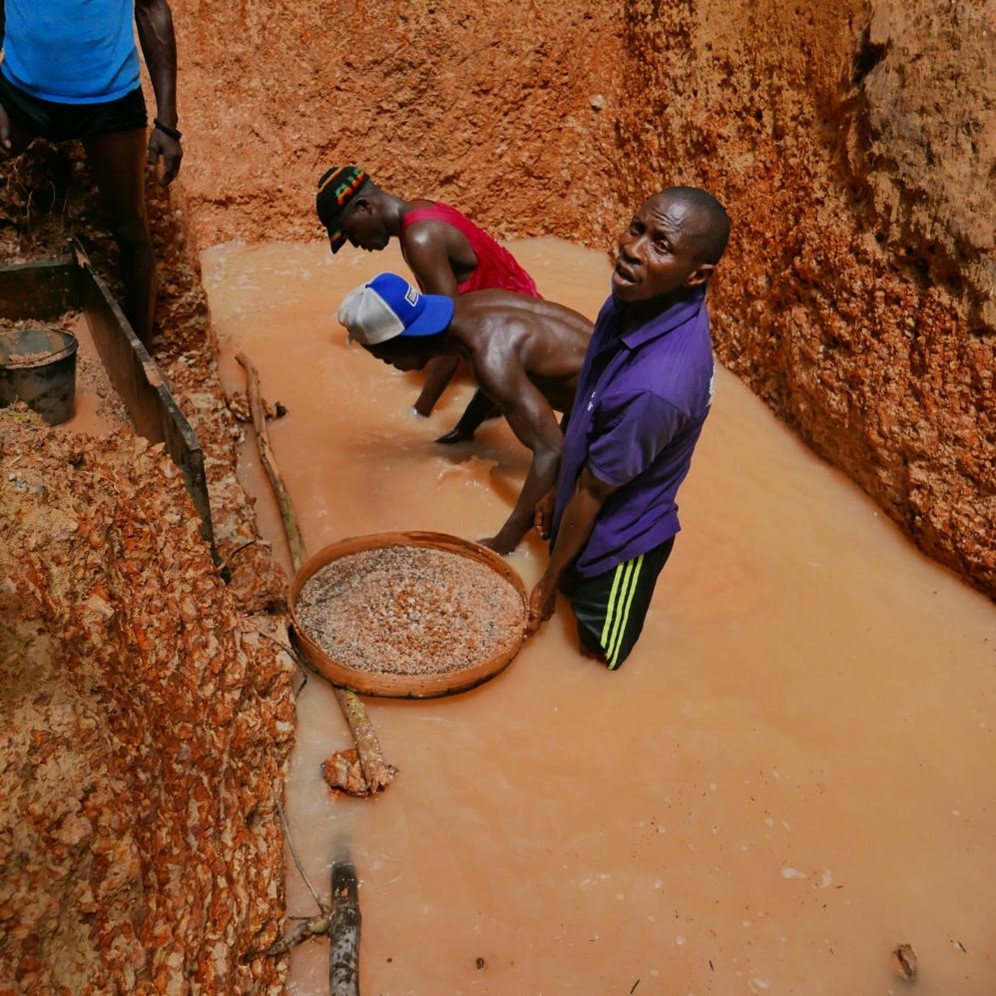 A cross-border collaboration in Liberia and Sierra Leone by Eric Opa Doue and Emma Black, with New Narratives

SAND BEACH, River Cess – As a commander of the Small Boy Unit —a brigade of child-soldiers of the National Patriotic Front of Liberia — Emmanuel Gaye guarded civilians his adult commanders captured on a goldmine in River Cess. He monitored their movement and activities. Nearly 18 years after the war, the 36-year-old has returned to the mines. But this time, he’s a civilian – a husband and father of two.

Like Gaye, Mohammed Sannon, aliased ‘Co Morris’ and a former fighter, commanded a unit of about 40 soldiers of the Kamajor Defence Force in Hangha Town in the war in neighboring Sierra Leone. During the war, Sannon had people working for him at the mercy of his guns. Gaye and other child soldiers were posted at the mine to ensure that no one escaped.

It is a huge reversal of fortunes for Gaye and Sannon. When they were rebels, they held mineworkers under gunpoint to dig gold and diamonds in some of the largest mines in Liberia and Sierra Leone. With the guns, they had power, the mineral money, and women—some of them by force. Now husbands and fathers, they have returned to the very same mines, no longer with guns but with diggers and shovels to fend for their families.

Sannon was controlling about 40 rebels during the war. Now he has just four men working for him in the mines. The former rebel commander told The Bush Chicken he does not regret paying people to work for him. He said he shares his proceeds with his financier.

“During the war, I could make anyone to work for me because that was wartime, but now I am not a soldier anymore, so anyone who works for me I must pay them,” Sannon said.

The armed conflict (1991-2002) in Sierra Leone between the rebel faction of the Revolutionary United Front of Sierra Leone and successive military and democratic governments – most time supported by Kamajors — left the country battered and impoverished, with upwards of 50,000 killed, half the population displaced, and more than two-thirds of its already severely limited infrastructure destroyed.

Foday Sankoh, an ex-army sergeant led the RUF. Sankoh said he represented the urban dispossessed and promised impoverished peasants a greater share in the mineral wealth misused by the corrupt government. However, Sankoh used brutal tactics, such as mutilation and amputation, against these same peasants to allegedly expose the government’s inability to protect its citizens.

The wars in Sierra Leone and Liberia were fueled by the sale and trade of diamonds. These diamonds came to be known as ‘blood diamonds’ or ‘conflict diamonds,’ because every armed group involved in the war in Sierra Leone used the proceeds from the trade and sale of diamonds to buy weapons.

Sierra Leone’s ‘blood diamonds’ helped fuel atrocities in the impoverished West African nation in the 1990s. Throughout the nine-year civil war, fighting concentrated in and around the diamond districts. RUF leaders were very aware that whoever controlled the diamond mines controlled Sierra Leone and profits from smuggled diamonds funded its attack.

In Liberia, Gaye says he was forcefully recruited by Oldpa Zammie, alias Ma Mapue, an NPFL general at the time. Gaye was just nine years old in 1993 when his entire village was set ablaze by the NPFL rebels.

He fought for the Jungle Lion faction of the NPFL of former President Charles Taylor of Liberia in River Cess from 1998 until 2003. The NPFL and the Liberia Peace Council, of now Representative George Boley of Grand Gedeh’s first district, fought for control of timber and gold-rich River Cess but the NPFL controlled a larger portion of the county. Charles Taylor was convicted of war crimes by the Special Court for Sierra Leone for fuelling the war in Sierra Leone by arming rebel factions with guns and ammunition in return for diamonds, even while Liberia itself was going through its own protracted and violent civil war.

At the mine, Gaye was working for his commander from age nine until he was fourteen. According to him, he left the mine and became an active combat rebel as commander of the Small Boys Unit. “They [the rebels] took us to their base and that is how we started toting water for them on the goldfield,” Gaye said. “I stayed on the mine working for Ma Mapue for five years. By that time, I was 14 years now and they made me the commander of the Small Boy Unit of the NPFL on the base.”

Gaye quit mining in 1998 and became an active combatant until the DDRR process in 2005 when, according to him, he was disarmed and given US$300 by the National Commission Disarmament Demobilization Rehabilitation and Reintegration.

“When I got the money, to be frank, I spoiled it; I didn’t do anything good with it,” Gaye told The Bush Chicken. “I was just buying big, big jeans and lion tapes until the money finished.”

Sannon did not go through the full disarmament, demobilization, and reintegration process either.

“During the time of the DDR process, my father was sick and me being the elder son, I had to take care of him, so I never went through the process,” Sannon told The Bush Chicken in an interview in Hangha Town, where he mines.

“I was even supposed to join the army but because of my father’s sickness, I said no. So I disarmed, I turned over my weapon, and they paid me off.”

After the war in Sierra Leone, there were several skills training programs for ex-combatants but Sannon said he could not take advantage of any because his father was still sick. 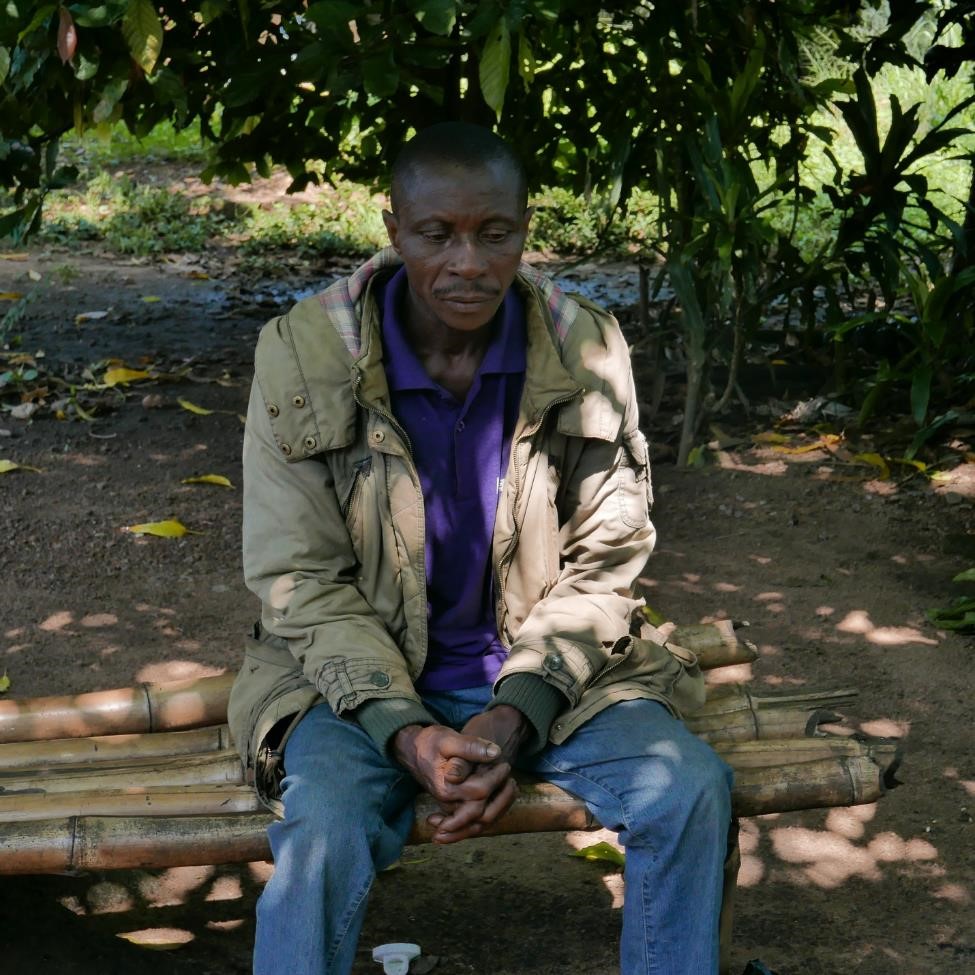 In Kenema, the head of a local civil society group Forum for Extractive Human Rights and Development, Aloysius Dougba, told The Bush Chicken that there are ex-combatants in the mines and in every other sector of the Sierra Leonean society.

“During the war, they [the ex-combatants] learned a bitter lesson, because whenever they got the diamond and have it sold, they will be seen playing music all in the streets with men behind them till the money finish,” Duogba said. “But now they have realized that houses were burnt, so when they get the money they do not spoil it. Some of them are building houses and acquiring other properties.”

Life in the Mines Today

Sannon controls four miners at a diamond mine in Hangha Town Kenema Sierra Leone. He has been mining since the end of the Sierra Leonean crisis and became the head of his family, responsible for his children as well as siblings and other relatives.

“The money I got when I turned my weapon over, I got the mining license and started mining here in Hangha Town where I am today,” Sannon said. “Now I don’t have money to get all the documents and other materials needed for the work, so I got a supporter. When we get the diamond, we sell it and divide the money in three portions – one for the supporter, one for me the bush owner, and the other for the workers.”

Most ex-combatants like Sannon and Gaye drifted back to the rural and mining areas, working mainly as low-paid diamond diggers. Sannon recalls his highest amount generated from the mine since the end of the war was Le 86,000,000 (US$8,600).

Gaye works for one Oldpa Mentee who claims to be operating a Class C mining license. He works with a group of seven miners here in Sand Beach goldmine. They work for Mentee for five days and for themselves two days every week. Gaye uses some of the proceeds from the mine to pay his 14 years old daughter’s school fees and to feed his family.

“Even though it is risky mining without anything to protect you, but I think it is better than fighting war,” Gaye says.  “It’s not easy. It’s difficult because I have my children, I have my wife, and I don’t have any money to give them.”

This story was a collaboration with New Narratives as part of its Excellence in Extractives Reporting Project. German Development Cooperation provided funding. The funder had no say in the story’s content.