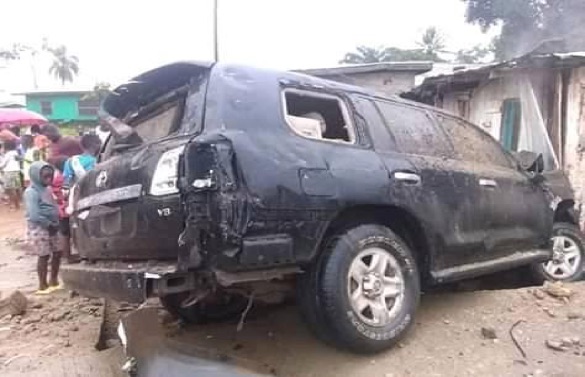 Our democracy was on trial under Doe and Taylor. It is now on retrial under ex-soccer star George M. Weah. Things are falling apart so quickly. Lawlessness is hitting the roof. Violence and vandalism have become the new normal. The debris and scars of our dark past are fast evolving. Terror is back in the land.

This is a warning of a breakdown in governance and a crackdown on democracy. No law and order. The Liberia National Police has become a partisan police force. The judiciary is corrupt and toothless. The legislature is rubber-stamped and houses a group of racketeers. Both branches are controlled and manipulated by a domineering and an inept executive.

The state is quickly deteriorating, and our fragile peace has become vulnerable more than ever before. The new ruling clique has no cure to prevailing crises and growing tension. Protests are everywhere, as George Weah runs out of time to show leadership and exert control. He may go down in history as the worst president of Liberia â€“ and perhaps Africa.

In less than four days, vehicles of opposition figures have been vandalized while fierce critics have become prime targets of repression. Yesterday, it was Mo Ali of Unity Party and Jestina Taylor of the Alternative National Congress. Today, it is representative candidate Telia Urey of the All Liberian Party. Whoâ€™s next? The forefathers of our democracy must be crying out. Our nation appears to be on time bomb. This wreckage is too inconceivable.

An Encouragement to Candidate Telia Urey:

In difficult times like these when a sitting Head of State who should be a national symbol of unity goes all out to spread messages of hate and bigotry, I can only imagine and conclude that Liberia is fast speeding in reverse gear. Hence, the rise of a gangster republic under George Weah.

When Weah publicly divulged on June 22, 2019, that â€œa Urey can never be electedâ€ as long as he is president of Liberia, I knew that our republic was heading for trouble. The burning of your vehicle today is a result of such premature decree from an ill-advised leader. We are now under a newborn fascist. Imagine you were even stoned and you had to run for your life. Is this the Liberia we voted for in 2017?

But remain strong, Telia Urey, as I have always known you to be. Do not give up because you are the real choice of the people in Montserradoâ€™s 15th electoral district. This is an attempt to scare you and your supporters from continuing your campaign in Logan Town.

Today’s violence against you serves as a rallying call for solidarity forces to hurriedly unite and confront this national nightmare that is vitiating or damaging our land. Yes, I believe so, and we must not afford to be divided during such a time as this.

Remain resilient, focused, fearless, courageous, peaceful, and most importantly, loyal to your country and conscience. Women too deserve a space to serve. You too deserve an opportunity to lead. March on with pride, tolerance, patriotism, and maturity, for victory is certain.

You were born to win, and you will win. The people are with you in this worthy pursuit. You must uphold their trust and confidence. Never stop inspiring them to soldier on. Let your willpower convince them to remain hopeful because all is not yet lost.

It will soon be over and victory shall be all yours as you take charge of the gavel to lead the great people of the 15th district to triumph. Like it was in the thirteenth and tenth districts, so it is in the fifteenth. Do not give up.

As a youth and student activist, I want to strongly condemn the wave of violence in Liberia and call for an independent investigation into all violent incidents. I call on ECOWAS, the African Union, the United Nations, the U.S. Embassy, the European Union, and the host of other international organizations and partners, to immediately intervene because things are actually going out of hand.

The Liberia National Police, under Inspector General Patrick Sudue, has lost public confidence and trust. As a result, the people could take matters into their own hand if caution is not taken by the Weah-led government.