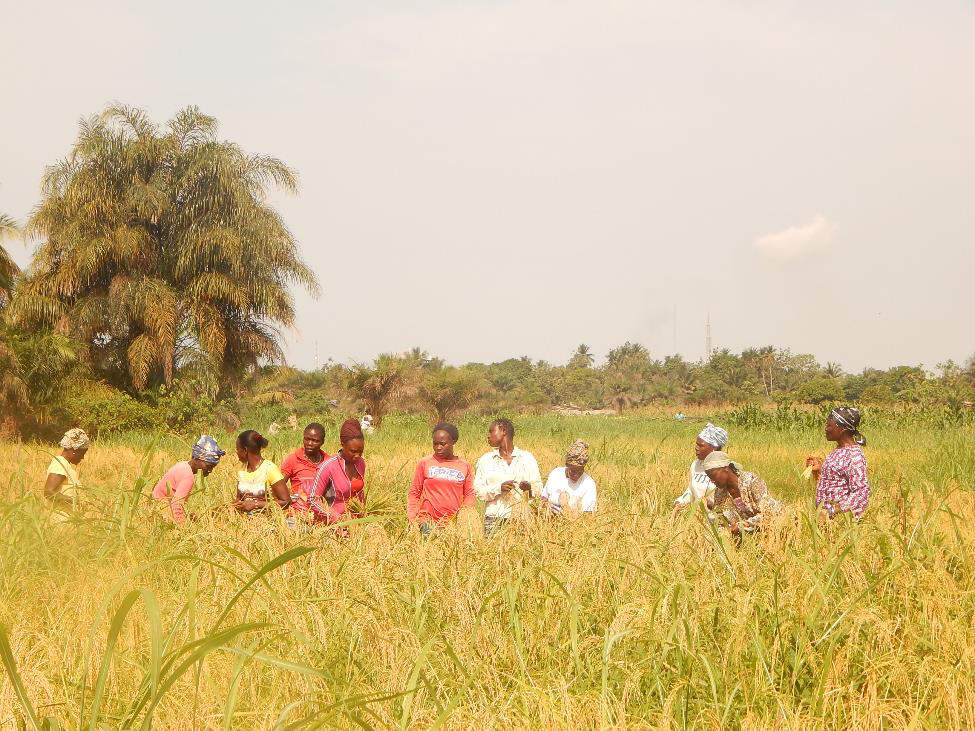 PAYNESVILLE, Montserrado â€“ About 30 percent of Paynesville is covered in wetland, according to Liberiaâ€™s largest local producer of rice, Fabrar Liberia. Itâ€™s no surprise, then that the company worked with the Paynesville City Corporation in a project sponsored by UNMIL to provide hands-on training in lowland rice production to youth in the city.

The beneficiaries were from the Zubah Town community, where the project site is situated. The project trained 187 youth in farming rice in the wetlands of Paynesville, as a means of earning income. In addition to on-site training and power point workshops, the participants were also provided with a minimum daily wage during the program.

The programâ€™s first harvest took place on March 9. Speaking to The Bush Chicken on Friday, March 16 during the second harvest, many of the beneficiaries expressed gratitude to the organizers and funders for the initiative.

Sarah Fayiah, a youth in Zubah Town, said in the past five months, she learned useful techniques in lowland rice farming.

â€œAlthough I did farming before in Lofa, I have learned new ways to do it and have better results,â€ she added. She said the project allowed her to support her children in school. A beneficiary of the program carrying rice after harvest. Photo: Gbatemah Senah

Margaret Kollie, a high school dropout who also benefitted from the program, said she is grateful for the training.

â€œNow I know how to plant, manage and harvest rice on lowlands, and even identify the different types of rice,â€ she said.

With the little knowledge she earlier had on growing vegetables, coupled with this knowledge on rice farming, Kollie said she can now earn more money to sustain her family while also reducing her spending on rice.

With the aid of Fabrar that also provided her with fertilizers and pesticides, Kollie said, she now also harvests at least two tubs filled of okra twice a week.

Another beneficiary, Faith Tarwo, said the project allowed her to now understand the stages of lowland rice farming, including transplanting, weeding, and harvesting.

Being a mother of two, and a spouse to a commercial motorcyclist, Tarwo said she hopes to constantly contribute to the upkeep of her family. A 25kg bag of Fabrar rice after being processed. Photo: Gbatemah Senah

Mulbah Jackollie, a managing partner of SAMJAC Agro Industry, which provided technical support to the project, said while the project provided classroom training to the beneficiaries, time was also spent on providing practical or hands-on training. He said few of the beneficiaries had prior knowledge on rice farming.

Fabrarâ€™s senior managing partner, Jeanine Cooper, said the project was an offspring of an engagement of the former Paynesville mayor, Cyvette Gibson, and UNMIL on making wetlands in the city become productive in a sustainable way.

She said the Zubah Town demonstration site covered at least 20 hectares of the community swamp land with over 40 plots of rice planted. She described the project as successful, adding that the 187 people trained surpassed the goal of training 100 youth.

She said the project was using two varieties of rice. Nerica L-19, a 3-month variety, was planted in late December of 2017 and was the one currently being harvested. Princess IR-64, another variety which can be harvested 60 days after transplant, would soon be ready for harvest.

â€œThese varieties show that we can have between six harvests of rice in a year, for the same amount of land with the necessary inputsâ€ she said.

Cooper said because of the program, UNMIL has already approved two additional projects in Bensonville and Brewerville to replicate the program. UNMILâ€™s program manager, Navaneethan Vijaykumar, said the project is one of the best of the over 700 quick impact projects funded by the mission.

Vijaykumar said although the mission is closing its activities, the lowland rice farming program was considered an exception because of its importance to the country.

Liberiaâ€™s staple food is rice, but nearly 80 percent of rice consumed in the country is imported. Vijaykumar said the project is a gateway program to reveal to citizens the potential of their country, starting with agriculture.

He said, with Liberiaâ€™s available land and water resources, the country can produce more rice to feed its people and other parts of Africa.

He said the goal of the project was to also provide skills to vulnerable youths and make them productive in society.

â€œSo, this is not only a quick impact project for us, itâ€™s a youth empowerment project,â€ he said.

For her part, Paynesvilleâ€™s director for special projects, Robena Vincent, said it was an honor for her to see the project impact communities by providing security and empowerment for young people through capacity building.

She said the city would remain committed to supporting the program and hopes that it is extended to other communities in the city.